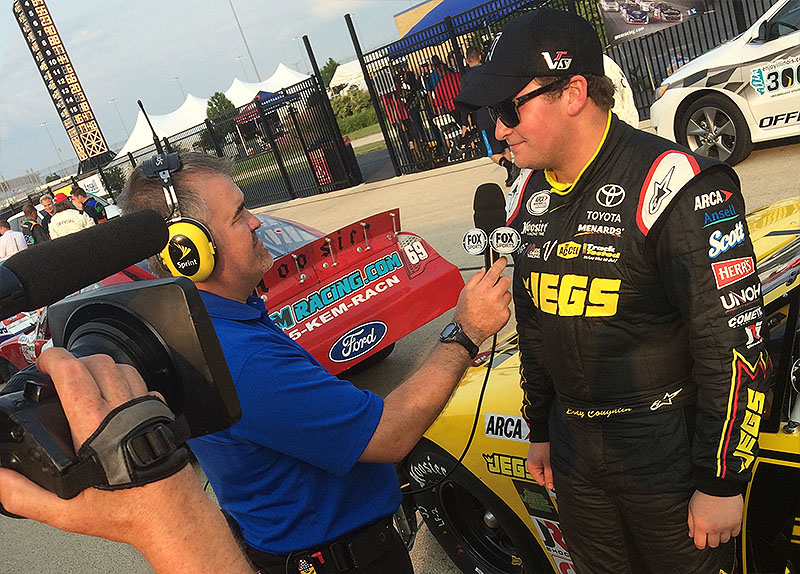 Cody Coughlin was a contender for the win throughout the Ansell ActivArmr 150 ARCA Racing Series event at Chicagoland Speedway.  In fact, he even had a shot at the win in the final 10-lap sprint to the finish.  At the fall of the checkered flag, Coughlin's new-tire charge to the finish ran out of laps as he ended the race in the fifth position.

Coughlin was quickest in Friday's practice at Chicagoland, qualified his No. 55 JEGS.com Toyota for Venturini Motorsports in the fifth position and mixed it up with the leaders throughout Saturday’s 100-lap event.  A pit stop for new tires allowed Coughlin to charge from 10th with just 15 laps remaining.  He made quick work of other cars in the top-10 and got to fifth with a couple handful of laps to go.

While he ran out of laps to move up even further, Saturday's result gave the 18-year-old Joe Gibbs Racing Development Driver's first ARCA Racing Series top-five finish and a lot of momentum going into his upcoming ARCA events.

"I'm really happy with how things went this weekend," said Coughlin.  "We were top of the charts in practice, qualified well and ran up front most of the race.  I passed a lot of people and got more and more experience, which is what we're here to do.  I still made a couple mistakes like having some trouble working the lapped traffic late in the race and missing the stall on a pit stop, but once we get those worked out I think we'll be competing even stronger for wins real soon."

Crew chief Dave Leiner and spotter Scott Wimmer brought Cody Coughlin down pit road with 15 laps remaining for the day's final pit stop.  When the green flag dropped for the final sprint to the finish, Coughlin started his charge that got him into the top five.

"I knew we'd have a good shot at it on that last restart," added Coughlin.  "I kept seeing the 25 (Venturini Motorsports teammate and early leader Justin Boston) and those guys getting closer and closer and thought, 'Man, I might have a shot at this.'  We ran out of time, but overall it was still a good day."

Like with any strong run, Coughlin did his job behind the wheel, but a lot of support from everyone involved in his effort led to the success.

"I was able to get a lot of help from Scott, my spotter, and that was huge for me.  Dave made some great calls in the pits and the guys had great pit stops.  I'm really happy with the progress that we're making as a team.

"Plus it was great to have the support of family, including my mom (Di), dad (John) and sister (Kennedi) this weekend, like always.  I'm blessed to have a family and team that want the best for me and I'm happy on days like today to get them the kind of results we all deserve."

Coughlin will be back in action with his No. 55 JEGS.com Toyota on Friday, July 25 in the SCOTT Get Geared Up 200 at Lucas Oil Raceway, located outside of Indianapolis, Indiana.