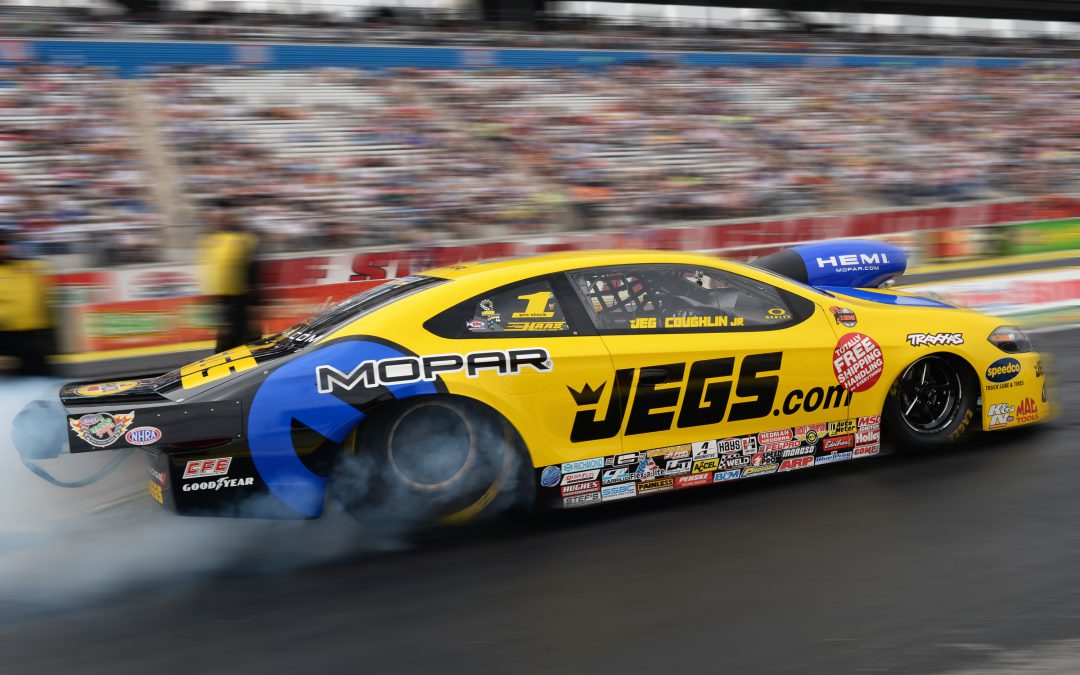 The official pole-winning time for Coughlin was 6.625 seconds at 208.78 mph, secure in Friday's second session.

The No. 1 qualifier offset a second-round loss Saturday to Erica Enders-Stevens in the K&N Horsepower Challenge, which also served as Q4 for this weekend's national event.

"We're really proud to hold on to the No. 1 position," Coughlin said. "We're honored to receive the bonus from K&N and NHRA. It really shows quite a bit for our team. We've been hustling a lot the last month-and-a-half getting these new cars ready and starting the new season."

The J&J Racing team debuted a new Dodge Dart for Gainesville in the most recent race, won by Coughlin's teammate, Allen Johnson. The new Dart now has a victory and a No. 1 qualifier in two races.

"We had a great ride today, but just gave it up second round to Erica in the Horsepower Challenge," Coughlin said. "That was a bummer, but we were low for the round, and that gives us more data to prepare this car for race day."

Coughlin, a five-time Pro Stock winner at Vegas, made four solid passes in qualifying, all within .017 seconds. Conditions changed from Friday to Saturday, and Coughlin's team made numerous adjustments to the new Dart.

"We made quite a few adjustments coming into today, and for the Horsepower Challenge, we made some more adjustments being first pair," Coughlin said. "We were really happy with the results and the performance of the car. We'll tuck that in our hat and get ready for tomorrow."

Conditions should be cooler still on Sunday, when five-time Pro Stock champion Coughlin squares off against Mark Wolfe, who qualified No. 16 with a pass of 6.724 seconds at 205.69 mph.

"If things play out the way the forecast looks, we'll likely have a lot cooler weather for tomorrow, which will return us back to more of a Friday-type setup," Coughlin said. "We changed the car quite a bit from Friday to today. It was a lot warmer, and the track was a little bit different.

"We're really happy with the cars. Both Allen's and mine have run really well, and to be No. 1 is great."