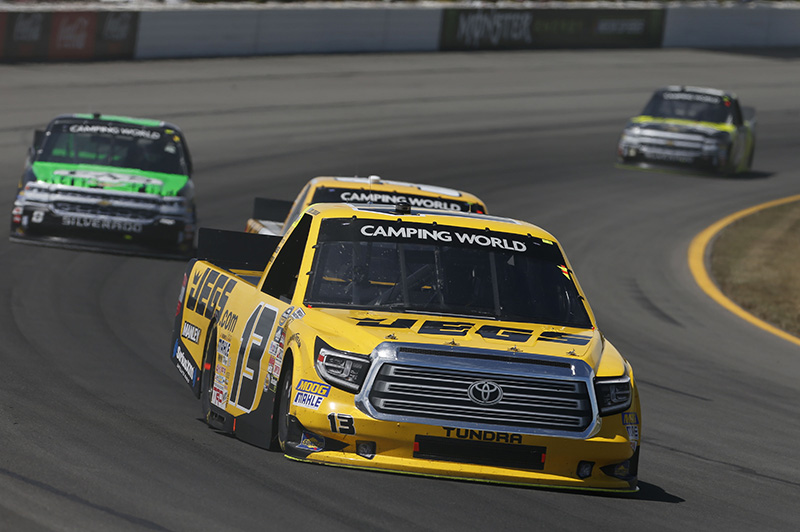 Fresh off a career-best NASCAR Camping World Truck Series finish in the Poconos, Cody Coughlin is hoping to have the luck of the Irish on his side in the Irish Hills of Michigan. Coughlin will pilot his RIDE TV/JEGS.com Toyota Tundra for ThorSport Racing in his third start at Michigan International Speedway in the LTI Printing 200 on Saturday afternoon.

In Coughlin’s last race at Pocono Raceway (PA), the 21-year-old driver finished eighth, the best finish of his young career. Coughlin finished 11th the race prior at Eldora Speedway (OH), so now Coughlin has momentum on his side moving forward.

“We’ve had good speed all season long, but we haven’t had the finishes to show for it,” Coughlin said.  “Obviously we want to finish even better than eighth, but it’s great to finally get that top 10 finish out of the way. Now we have something to build on.  I appreciate JEGS and RIDE TV for all their support and now I know it’s only going to get better from here.”

Coughlin now heads to one of his favorite race tracks on the schedule for Saturday’s race. The two-mile oval in Brooklyn, Michigan was the site of Coughlin’s second-career series start.

“I think I was going to finish sixth there last year and then we broke the transmission, so I’m very confident that we can head there this weekend and contend for a top five; that’s our goal.  I’m very thankful that Duke and Rhonda Thorson have continued to believe in me, and hopefully their faith in me will be further rewarded throughout the second half of the season.”

Coughlin will hit the track for two practice sessions on Friday, August 11th. The first session will begin at 1 p.m. ET. Final practice will follow at 3 p.m. ET. Both sessions will air live on FOX Sports 1.

Saturday, August 12th is LTI Printing 200 race day at Michigan International Speedway. The day will begin early in the morning with qualifying at 9:30 a.m. ET live on FOX Sports 1. Then at 1 p.m. ET the green flag will wave for the 200-mile/100-lap race, which will also be live on FOX Sports 1.

Saturday’s 100-lap race will be broken down into three stages.  The first two stages will be 30 laps in length with the final stage consisting of 40 laps.

Coughlin’s No. 13 Toyota Tundra will carry a JEGS onboard camera for Saturday’s race.

Race fans will have the chance to meet Cody Coughlin on Friday at the RIDE TV display in the fan zone from 4:45 to 5:15 p.m.