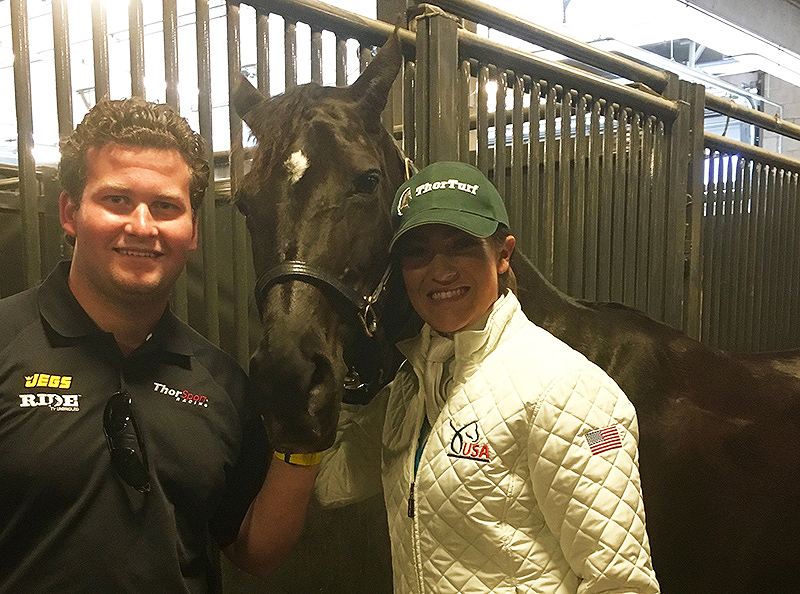 Horsepower has been a big part of Cody Coughlin’s life ever since he came into this world.  His father, John, is a winning NHRA drag racer and his mother, Di, has been around horses for many years.  And while Cody drives a Toyota Tundra in the NASCAR Camping World Truck Series, his sponsor is now RIDE TV – a 24-hour television network dedicated to showcasing horse culture and lifestyle.

All of those worlds came together this past weekend when the 21 year-old Coughlin made an appearance at the Equine Affaire in Columbus, Ohio, just down the road from where he makes home.

Coughlin was greeted by hundreds of his home state fans at the show.

“Saturday was a wonderful time.  It was my first time at the Equine Affair, and it was really a great event filled with a lot of passionate people,” said Coughlin.

Coughlin met many race fans and fellow horse lovers at the event when he signed autographs for more than an hour at the RIDE TV booth.

RIDE TV is a is one of the co-primary sponsors on Coughlin’s No. 13 Toyota Tundra for ThorSport Racing.

The 21-year-old driver said he was thrilled when he found out RIDE TV was coming on board this season, because it is a perfect fit for him as a horse lover.

“My mom, Di, has always been an avid horse person and she instilled her love of horses in me and my sister, Kennedi,” explained Coughlin.  “I started to ride horses at a young age.  So having RIDE TV with us is an easy fit for me to represent a company that is all about something that I really enjoy.”

Coughlin scored a career-best finish in the NASCAR Camping World Truck Series event at Daytona International Speedway earlier this year when he finished 11th in his RIDE TV Toyota Tundra.

The next race for Cody Coughlin in the NASCAR Camping World Truck Series will come on May 12 at Kansas Speedway, but first, Coughlin, the 2016 ARCA/CRA Super Series champion, will return to Super Late Model action for an ARCA/CRA Super Series event in his home state of Ohio at Toledo Speedway on Saturday, April 22.