Coughlin Shows Plenty of Speed in the Bluegrass State 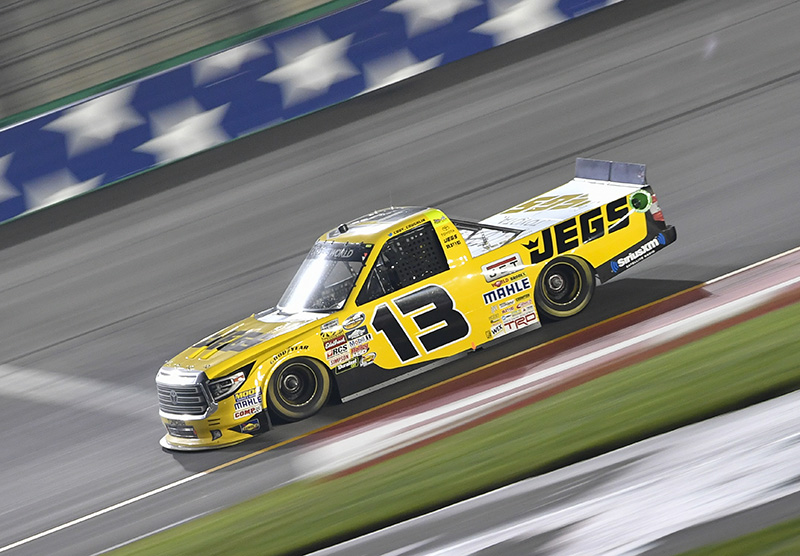 Cody Coughlin had been itching to get back to Kentucky Speedway for a long time, and he showed why on Thursday night in the Buckle Up in Your Truck 225. Coughlin raced in the top 10 for much of the late-night race that was delayed by rain. Coughlin eventually finished 15th after his engine expired on the final lap of the 150-lap event.

The Delaware, Ohio driver started 14th after qualifying was rained out. When the green flag waved a little after 10 p.m. Coughlin’s race got wild.

The 21-year-old driver was battling for his first career top 10 when his engine expired entering turn one on the final lap of the race.

“That was a bit weird,” said Coughlin.  “I had no warning that was going to happen until the engine just let go. It’s disappointing because we had another fast truck and had a top-10 finish within our grasp. It was fun racing up there for much of the night; it was certainly wild at times. I’m glad the rain stopped and we were able to get this race in, and I appreciate all of the fans that waited out the delay to watch us race.”

Coughlin’s next NASCAR Camping World Truck Series race with ThorSport Racing is on Wednesday, July 19th on the dirt of Ohio’s Eldora Speedway. Coughlin had a strong run at Eldora in 2016; he raced his way into the top 10 from the Last Chance qualifying race before a cut tire ended his night.

“I’m looking forward to getting back to Eldora. I never thought I’d say that I’m looking forward to racing on dirt, but last year’s race was a lot of fun until that tire went down. Hopefully we can have even more success this time around and I know this ThorSport Racing team will give me a great piece to tackle Eldora.  We want to give Duke and Rhonda Thorson a great finish in our homestate.”