Coughlin Shows Speed Deep in the Heart of Texas 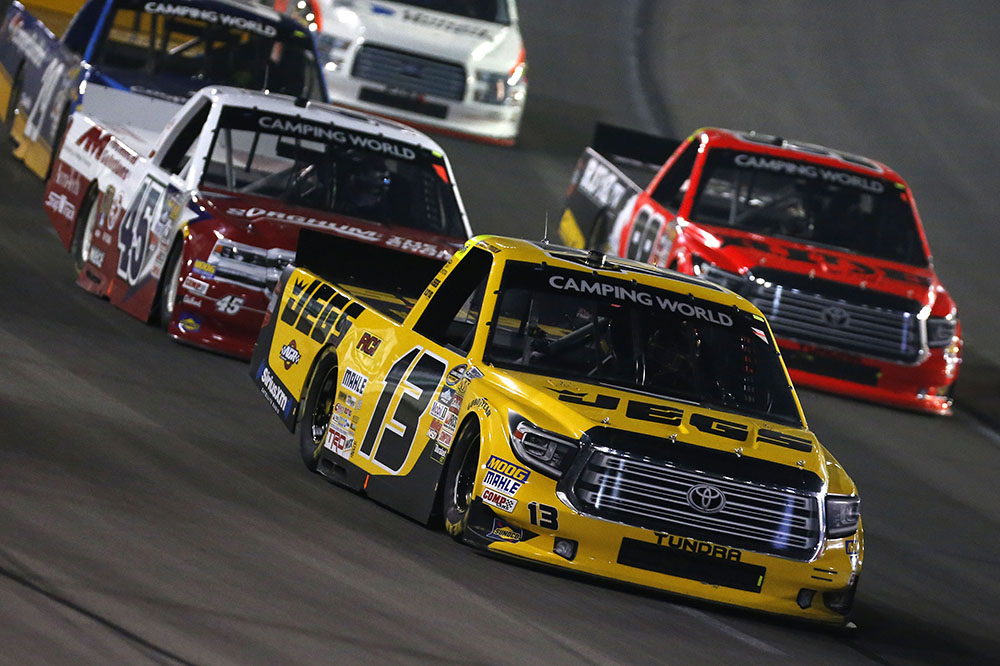 The “Wild West” can be one tough place, but Cody Coughlin and his ThorSport Racing team persevered in the NASCAR Camping World Truck Series race at Texas Motor Speedway.  Whether it was other trucks, his own ill-handling truck, or the gas tank, Coughlin fought through it all on Friday night to a 16th-place finish in the Lone Star state.

Coughlin qualified 15th on Friday afternoon. After his lap he said his JEGS.com Toyota Tundra was too tight on corner entry and corner exit.

That condition continued into Friday’s race as well. Coughlin and his team, led by truck chief Rich Lushes who was filling in for crew chief Michael Shelton atop the pit box, came down pit road multiple times to improve his truck’s handling.

After near-contact with Austin Cindric, Coughlin fought hard and was knocking on the door to a top-10 finish before running out of fuel on the last lap of the race.

Coughlin’s pit crew refueled the truck so he could finish the race. The Ohio native crossed the finish line in the 16th position.

“Tonight was a struggle, but we showed a lot of fight tonight,” said Coughlin. “I can’t thank my guys enough for battling hard. I also can’t thank Duke and Rhonda Thorson enough for letting me drive their trucks, and I have to thank God for keeping me safe out there. Hopefully we’ll have a better run in Phoenix next week. Even though this week didn’t go as planned, it was awesome to race in front of my aunt and uncle. They live nearby the track here in Texas so they don’t get to see me race too often. It was a lot of fun seeing them this week.”

Coughlin has just two races remaining on his 2017 NASCAR Camping World Truck Series schedule. Coughlin’s next race will be on November 10th at the Phoenix Raceway in Avondale, Arizona.