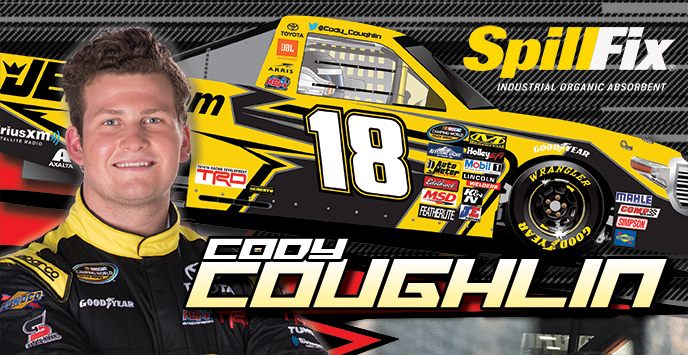 On Friday, February 19, Cody Coughlin will make history for his famed drag racing family.  The 20 year-old will continue to climb the ladder of the circle track world and for the for the first time will take the green flag at the World Center of Racing in a NASCAR event.

Coughlin will pilot the No. 18 JEGS/SpillFix Kyle Busch Motorsports Toyota Tundra in the NextEra Energy Resources 250 at legendary Daytona Int’l Speedway, and the Ohio-native is having a tough time containing his enthusiasm.

“I am super excited about this,” said Coughlin.  “Making a NASCAR Camping World Truck Series start at Daytona is a total dream come true for me.”

This isn’t the first start for the Delaware, Ohio driver on the high-banks of Daytona.  Coughlin qualified second for the ARCA Racing Series Lucas Oil 200 at Daytona one year ago.  He stayed up front all race long, led eight laps, and finished an impressive fourth.

ARCA cars are very different from the machines that compete in the NASCAR Camping World Truck Series.  However, Coughlin isn’t letting that keep him from being as confident as can be heading into the 250-mile affair.

“I really think that we can run up front and contend for the win on Friday night, and there would be nothing cooler than scoring my first Truck win at Daytona,” Coughlin said.  “Look at all of the names that have won at Daytona in any series.  I’d love to add my name to that list; it would be an honor.  I think that with the team that Kyle Busch Motorsports and JEGS and SpillFix have assembled for me, anything is possible.

“I’m just so glad to have been able to partner with Kyle Busch, his team and SpillFix and I’m extremely thankful for the opportunity to race for them.  Hopefully I can get them a win right off the bat,” said Coughlin.  “I’m also extremely thankful for all the support that my parents, Di and John, have given me throughout my entire life and I am happy to have my sister, Kennedi with me as well.  The Lord has certainly blessed me with this opportunity and I plan to make the most of it.”

The NextEra Energy Resources 250 from the Daytona International Speedway will see the green flag fly at 7:30 p.m. ET on Friday, February 19 and can be seen live on FSI and heard on MRN radio affiliates.