Coughlin Trying To Tame NASCAR’S Beast of the Southeast 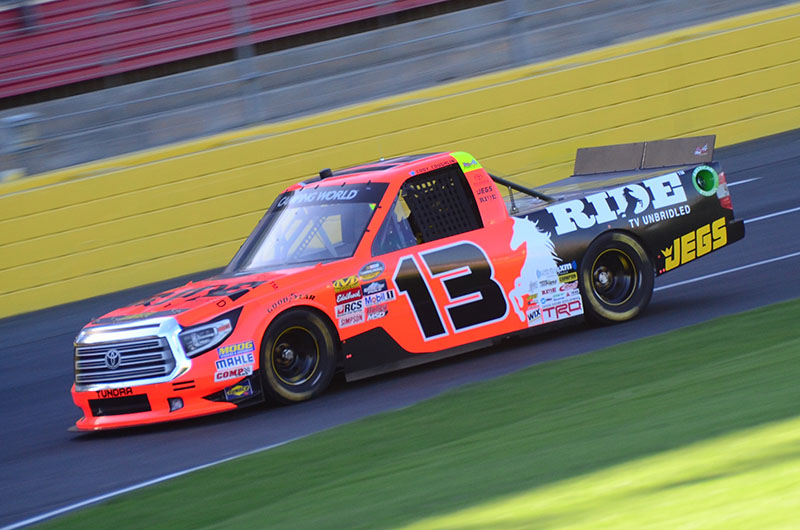 Cody Coughlin has speed and momentum on his side heading into this week’s NASCAR Camping World Truck Series race at the Charlotte Motor Speedway.  In fact, after racing near the top of the pack in last week’s NCWTS race in Kansas, and testing at Charlotte a couple weeks ago, Coughlin and the ThorSport Racing team are primed to pick-off their first top-10 finish of the young season.

The 21-year-old driver will pilot his JEGS.com/RIDE TV Toyota Tundra for ThorSport Racing in Friday’s NC Education Lottery 200 on FOX Sports 1 at 8:30 p.m. ET.  For Coughlin and the NCWTS, it’s the second straight week of racing on a 1.5-mile racetrack.  The team recorded 26th at Kansas Speedway last Friday after transmission issued sidetracked the team’s potential top-10 run.

Friday’s race will be Coughlin’s first at the 1.5-mile track in the heart of stock car country.  Coughlin and his team participated in an open test session at the track two weeks ago.

“Charlotte was a track that I always thought looked tricky,” said Coughlin.  “After testing there I can say that it definitely is a bit tricky, but not as tricky as I initially thought it would be. I actually ended up enjoying the track by the end. That test certainly helped the team and I, and it gives us confidence that we will have a good showing.”

The No. 13 team also used the second half of the Kansas race as a test for this week in Charlotte.  After the team replaced the transmission, Coughlin and his ThorSport crew chief, Michael Shelton, decided to try different things with his Toyota Tundra to prepare for CMS.  At one point, Coughlin was running lap times that were equal to those of the leaders.

“It’s a shame that we had that issue because we were really fast,” Coughlin said.  “I know that Michael and all of my guys will give me a truck that fast again at Charlotte.  Hopefully we can have luck on our side and we can get the result that I know this team and Duke and Rhonda Thorson deserve.  God has blessed me with a great opportunity and I’m ready for it once again.”

Friday, May 19 is race day for Coughlin and his ThorSport Racing team. Qualifying will take place at 4:45 p.m. ET with the green flag to follow at approximately 8:30 p.m. ET live on FOX Sports 1.