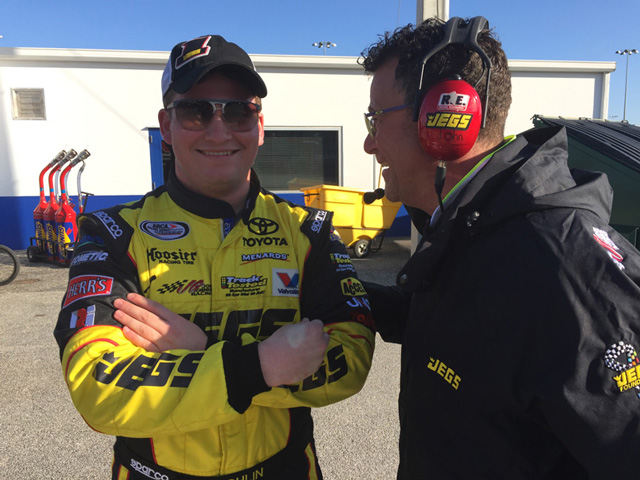 Joe Gibbs Racing Development driver Cody Coughlin will start on the front row in his first attempt at Daytona Int’l Speedway in the ARCA Racing Series Lucas 200.  In fact, the driver of the Sport Clips number-55 came within .004 seconds of winning the pole for Saturday’s race after posting a time of 187.320mph in the first-ever group qualifying effort at a superspeedway.

Coughlin and his Venturini Motorsports crew were able to overcome engine issues in the latter portion of an earlier practice that placed him in the middle of the speed charts.  His fast lap in qualifying came with confidence and focus and edged out 47 other competitors for the front row start in the first ARCA event of the season.

The 19 year-old gained valuable experience in practice, especially with former NASCAR Sprint Cup Series driver Scott Wimmer as his spotter and Crew Chief Dave Leiner, who has experience of putting cars in victory lane at Daytona with Bobby Gerhart.

“Practice helped me to learn patience, especially when we were in the garage for a period of time,” said Coughlin.  “I had a lot of opportunities to talk with my spotter Scott Wimmer and my crew chief to discuss different strategies.  Prior to coming here I had raced Daytona only on a video game and the strategy seemed fairly simple; keep it wide open.  After being behind the real wheel, I found out there is so much more that goes into it.”

Coughlin was part of the fourth group to go out for qualifying, where he and eventual pole-sitter Mark Thompson teamed up for a draft run behind a pack of five cars.  Together, the two put their cars up to the top two positions on the scoring pylon around the “World Center of Racing.”

Coughlin then had to watch the three final groups in qualifying before it was confirmed that he would be starting on the outside of the front row.  Two of those groups he had to wait for included several drivers who posted faster practice times leading up to the qualifying session.

His entire family, including his parents, John & Di, his sister Kennedi and friends alike, were in attendance to share today’s special moment.  After several hugs and handshakes, along with a few tears of joy, the realization of his outside-pole start became real for Coughlin.

“As if starting on the front row at Daytona wasn’t special in and of itself, the fact that we overcame so much in the past few days really makes this sweet.  My faith, family and friends are to thank for this amazing opportunity.”

On Saturday, February 14th, fans will have an opportunity to meet Cody during the ARCA Racing All Access/Open Garage for fans from 12:30pm until 2:00pm.

The green flag for the Lucas Oil 200 is scheduled to wave at 4:15pm on Saturday afternoon.  The race will be shown live on FOX Sports 1.