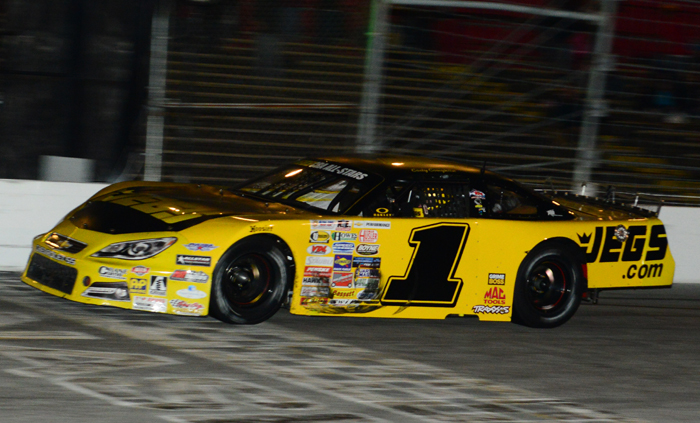 "It was fun to go out there and race with Sterling Marlin, that was very cool,” Coughlin said after the race. “It was a solid effort to come out here and finish third. It was a good day for our team.”

Coughlin was the fastest of 19 cars in qualifying with a time of 19.095 seconds (128.201 mph) around the 0.596-mile asphalt oval. With the invert of two, Coughlin started on the outside of the front row for the feature event.

The 17-year-old driver settled into second at the start, as Andy Johnson would take the lead at the green flag.  Coughlin was in a battle with Marlin for the runner-up spot by lap three.  Marlin would get on the inside of Coughlin on lap 21 as the two were catching up to lapped traffic. Two laps later, Marlin would use that traffic to his advantage and get by Coughlin for second.

“I don’t know, but it seemed like some of those lapped cars didn’t know how to get out of the way,” Coughlin said. “They were all over the place. It was a guessing game of where they are going to go and it favored Sterling as the lapped cars went up to where I was and he got by me.”

As early race leader Johnson faded, Coughlin and Marlin did battle with track champion Mark Day.  Just before the mid-point in the race Day passed the JEGS number-one machine for second.

Coughlin would hold on for the third place finish as the checkered flag fell for NASCAR veteran Sterling Marlin.

“The track is quick and it is a neat place. The tires go away so fast that it is a handful out there,” Coughlin explained after the race. “The tires went away on me and I could have done a better job on that of saving them. It is a really cool fast track. I look forward to coming back.”

“I’m just so excited about our team.  Freddie (Query, consultant), Nick (Easton, crew chief), Kevin (team manager), Scott (Wimmer, spotter) and the guys have been working so hard.  I feel fortunate to have them, my family and my faith on my side for this season.  It’s going to be good!”

It’s still a few weeks before Cody Coughlin and the team begins its quest for the JEGS/CRA All-Stars Tour championship.  Race number-one of the season is Saturday, April 28th at Springport Speedway in Michigan.