Cruising along, Jeg Coughlin Jr. once again a favorite in Bristol 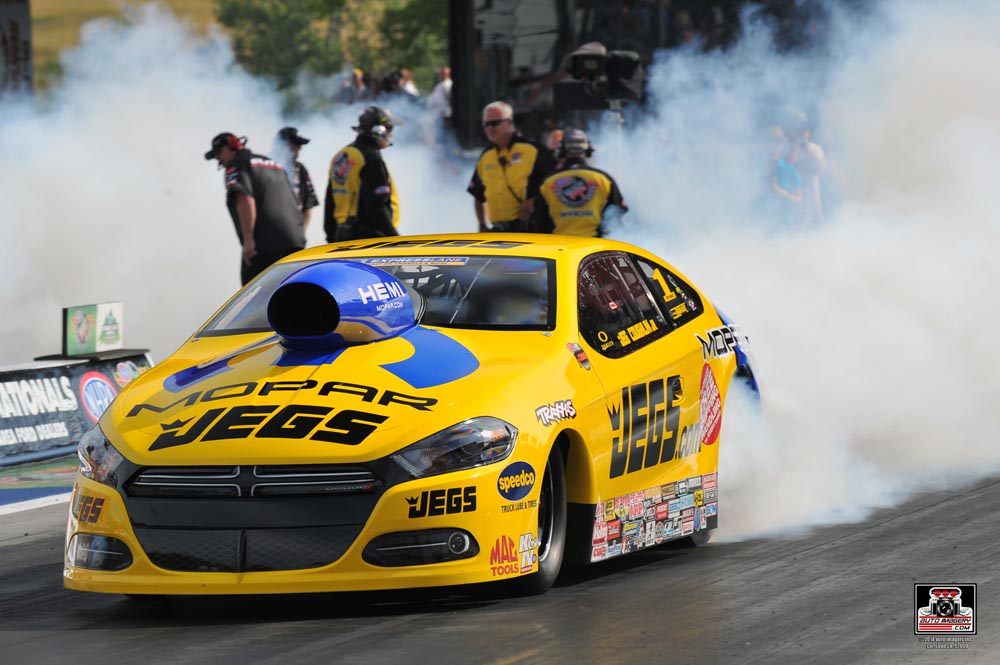 BRISTOL, Tenn. (June 14) — There seems to be no stopping reigning world champion Jeg Coughlin Jr. as the hottest driver in Pro Stock has once again positioned himself as a favorite at this weekend's Ford Thunder Valley Nationals.

After entering the weekend with two victories and a runner-up result in the past three NHRA events, Coughlin coolly placed his yellow and black JEGS.com/Mopar Dodge Dart in second place in the 16-car field.

Coughlin's 6.621-second run of record actually matched the quickest elapsed time of the weekend but he lost out on earning another pole based on his top speed, with his 208.62 mph slightly slower than top qualifier Shane Gray's 208.78 mph mark.

"I know this has happened in my career," Coughlin said of running the exact e.t. as another racer. "But I don't think  it's happened for the No. 1 spot – probably not, I would say, at least I can't remember. I would guess that's probably another first for us.

"No matter, we've had a heck of a car all through qualifying. We ran two real nice runs yesterday and were second and third in those two sessions. Today, we made some small improvements and the air was a bit dryer with the barometric pressure a little bit up, so we ended up first and second in the two rounds.

"The track stayed really, really good for as hot as that sun was on it, and the crew chiefs were able to apply quite a bit of horsepower to it. Tomorrow is supposed to be hotter, so today was a good warm-up. It will be interesting to see what happens."

As Coughlin's car continues to improve, the driver himself feels as though he's getting better, which certainly must be a cause for concern among his rivals.

"I feel good behind the wheel," Coughlin said. "We worked on a few reaction time things throughout the four qualifying runs, and I was really happy with it. We'll go up there tomorrow and see if we can be mid-.020s first round on the Tree and get the car A to B as efficiently and quickly as we can. It all about turning that win light on and going from there."

Coughlin has advanced from ninth to second place in the last three races.

Eliminations begin at 1 p.m., Sunday. ESPN2 will carry all qualifying and elimination action.