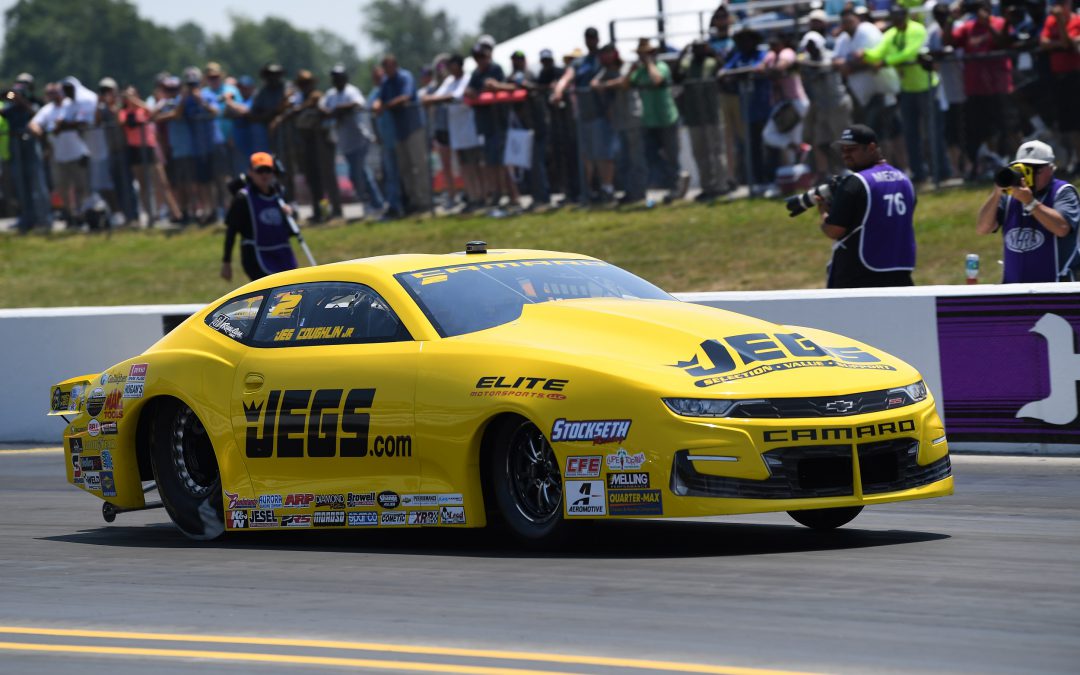 JOLIET, Ill. (May 29) — Pro Stock ace Jeg Coughlin Jr. broke the longest winless streak of his career at last year's Route 66 NHRA Nationals and ended up going on a tear that left him just one spot short of a sixth national class championship. Now the 62-time Pro Stock national event winner is expecting more Chicago magic, especially since he's one of just two drivers in his class to have won a race this year.

Joining Coughlin at the race is nephew Troy Coughlin Jr., a rising star in the Top Alcohol Dragster category who already has a regional championship and four wins to his credit in the high-speed class.

"Last year's Chicago race certainly marked a huge turnaround for us," Jeg Jr. said. "We're all very much hoping to successfully defend our Chicago title and start another big run. There's no reason to think we can't do it."

Jeg Jr. had a strong outing the last time he raced his JEGS.com Elite Motorsports Chevrolet Camaro, racing to the semifinals in Richmond, Va., before bowing out to eventual victor Bo Butner, the only other Pro Stock driver to win a race this season.

"I told Bo the other day it's got to be my turn again," Jeg Jr. said with a laugh. "We've had a bit of feast-or-famine year so far. We got that win in Phoenix early on and we certainly felt like we did coming out of here last year but then we had a couple of untimely early-round losses and came back down to earth.

"We did have a good run in Virginia and the car right now is absolutely fantastic. The crew is working hard and Rickie (Jones, crew chief) and the rest of the crew chiefs at Elite are way further ahead with the Rick Jones chassis then we were a year ago so I feel strongly we can challenge for the No. 1 qualifying spot and a win this weekend."

When he's not in his racecar, Jeg Jr. will be busy watching two of his favorite events — the annual JEGS Allstars race taking place Saturday at Route 66 and the Memorial PGA Tournament at Muirfield Village Golf Club in Dublin, Ohio, a course that holds a lot of memories for the Buckeye native.

"We have a lot of pride in our hometown and it's always neat to see the pros playing the course you grew up on," Jeg Jr. said. "I had a chance to play it last Friday, the final day before they shut it down and for all the final preparations for the PGA event, and it's in perfect shape. I plan to take a peek whenever I get a minute.

"I'll definitely be watching the JEGS Allstars also. You've got the best Sportsman drivers from the NHRA's seven geographical areas battling head-to-head in 10 different classes and then you add in the team aspect and it's one of the most unique experiences you'll ever have. You end up paying attention to every driver and every class because you're pulling like crazy for your home division to win the team trophy and the comradery makes it so special, especially in a sport where you're usually on your own."

Troy Jr. arrives in the Windy City full of confidence after a stellar weekend at the Division 1 season opener in Reading, Pa., where his JEGS.com McPhillips Racing Top Alcohol Dragster was the quickest car in qualifying and every round on race day. Troy Jr. was runner-up at the event after past world champion Duane Shields nipped him in the final on a holeshot, but Troy Jr. says that's only motivated him further for this weekend's race.

"The car's a Cadillac," Troy Jr. said. "Rich and Richie McPhillips and the entire crew have put in a lot of hard work to make this car perfect and it really is a stellar ride. The ball's in my court to do a little bit better behind the wheel so we don't give away rounds we should win.

"I'm focusing on all the positives this week. I'm such a lucky kid that gets to do what he truly loves for a living. We do this drag racing thing week after week because we love it and getting better is part of the process. If I stay focused and relaxed everything will work out the way it's supposed to. I'm ecstatic with the team and the car."

Just as it was in Reading with the heavyweights from D1, Troy Jr. knows the JEGS Allstars race will bring the best Top Alcohol racers in the country to Chicago.

"The Allstars race always adds a level of excitement to Chicago, especially with it carrying the name of our family business," Troy Jr. said. "The best drivers from all over the country are here and they all want to prove they belong in the Allstars field. I know, I've been there. There are 19 cars here for the national event, so it's going to be really exciting. I love races like this. It definitely keeps you on your toes."