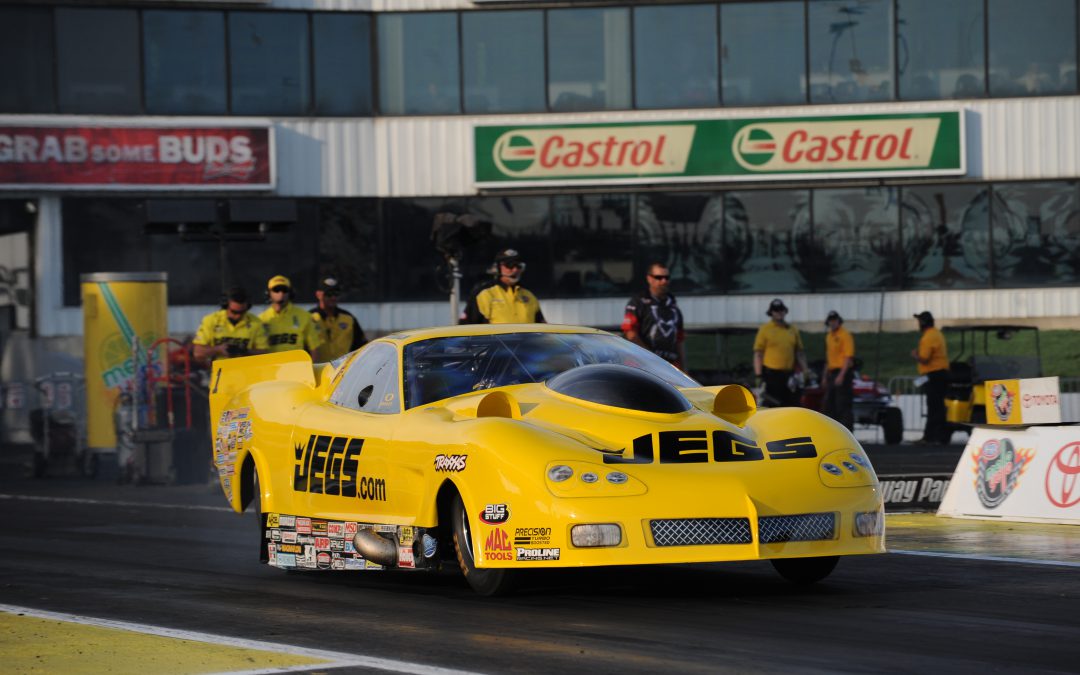 BRISTOL, Tenn. (June 11) — A strong runner-up finish at the NHRA tour's last stop in New Jersey lifted defending Pro Mod champion Troy Coughlin to second place in the world rankings. It also gave tuner extraordinaire Steve Petty a handful of extra passes down the quarter-mile as the team continues to perfect the tune-up for the turbo-charged JEGS.com Chevrolet Corvette.

"It worked out perfectly for us," said Coughlin, who is now just seven points off the class lead. "It's given Steve and the rest of the crew that much more confidence in the changes we've made to get this car up to speed with the new horsepower restrictions we're facing this year. Nothing compares to track time, especially under national event conditions, and we were able to make all seven passes in Englishtown (N.J.).

"We definitely got some lucky breaks and we know we need to run better but we feel like we're much closer now than we were a few weeks ago."

Coughlin and crew will next be tested at this weekend's 13th annual Ford NHRA Thunder Valley Nationals presented by Tri-Cities Area Ford Dealers. The race represents the fifth of 10 events on the Pro Mod Series schedule.

"Everyone seems to be doing much better over the first part of the track than we are so we need to make better decisions with getting the car up and moving. We need to get after it without being too aggressive and blowing the tires off. And it's only going to get tougher because turbo cars generally lose acceleration as it gets warmer outside."

Coughlin recorded one of the biggest victories of his life in 2000 at Bristol Dragway when he won the lucrative Winston Showdown, which was worth $50,000. Although he's in a different class these days, he says another win in Bristol this weekend would be just as satisfying.

"Pro Mod racing in the Southeast is the best because this is where the class started," Coughlin said. "It's the old mindset of 'cram the biggest, baddest motor you've got into your race car and let-er-rip' that people in the south really enjoy. We do to, and that's why we love racing Pro Mod."