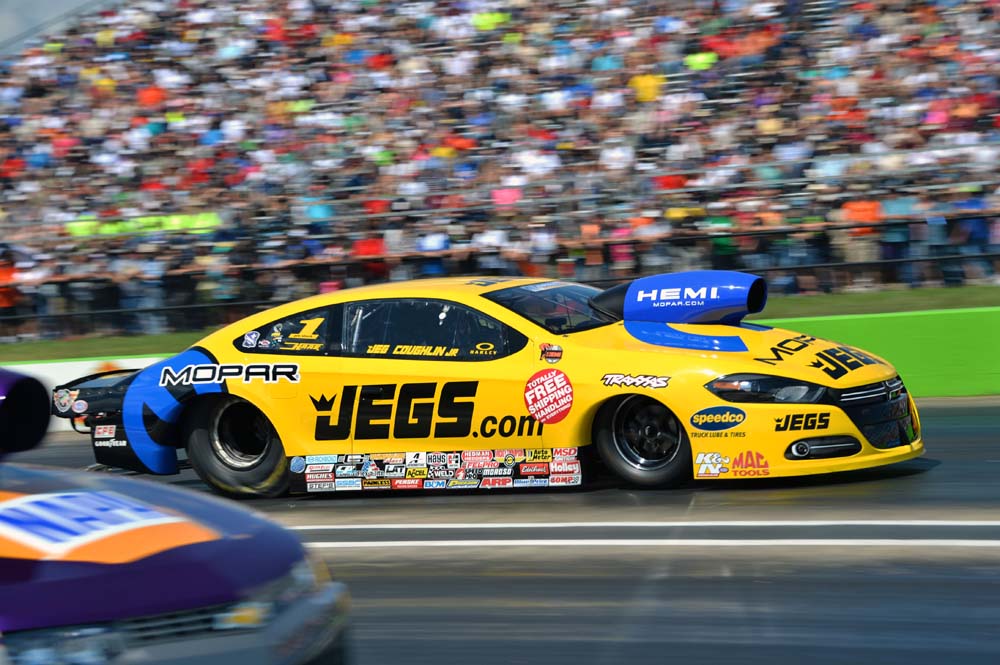 DALLAS (Sept. 21) — Reigning Pro Stock champion Jeg Coughlin Jr. started his weekend at Texas Motorplex with designs on scoring two victories, one in the rain-delayed Charlotte event and a second in the AAA Texas NHRA FallNationals. Neither one came to fruition, but the 58-time national event winner remains optimistic about his chances.

"We've got four races left, so we'll certainly make a strong effort," Coughlin said. "The whole team is extremely capable, and Allen (Johnson, teammate) has a great shot at winning the race today. He ran a real nice 6.56 there first round. I really felt like we were going to run a 6.56 or 6.57 ourselves even being first pair out. It just wasn't in the cards, as you say, so we'll move on to St. Louis next weekend."

Sunday morning, Coughlin faced Greg Anderson, and the two multi-time champions left the starting line with nearly identical reaction times, setting up what appeared to be a classic side-by-side battle. But things suddenly went south with the JEGS.com/Mopar Dodge Dart.

"It looked like I was on a really nice run," Coughlin said. "We left about even, Greg had me by just a thousandth on the tree. We were starting to outdistance him by the 60-foot timer, but about the time I was going into second gear it felt like it almost went to neutral. It looked like a double-clutch situation, which was very strange. All I could do was drop it into second and just really spun the tire hard.

"It's another first in my 15-plus-year career in Pro Stock. We're not sure 100 percent what has happened at this point, but our guys are extremely talented and will get to the bottom of it."

"Not quite the weekend we had drawn up," Coughlin said. "Here in Dallas, with the finishing up of the Charlotte race and then rolling into this event, we had high hopes. The car just wasn't where we needed it to be. Probably our best run was in Q4, which gave us a ton of confidence going into today. It just didn't work out this time.

"Big congrats to Cody, my nephew, who finished in the top five at the ARCA race in Kentucky; to Troy Jr. for winning the JEGS SPORTSnationals in Super Gas; and my niece Paige, who was runner-up over the weekend in Jr. Dragster at the JEGS SPORTSnationals. All around, it was a good weekend for Team JEGS. We'll pick up the pieces on the Pro Stock effort and finish the year with the remaining four races real strong."