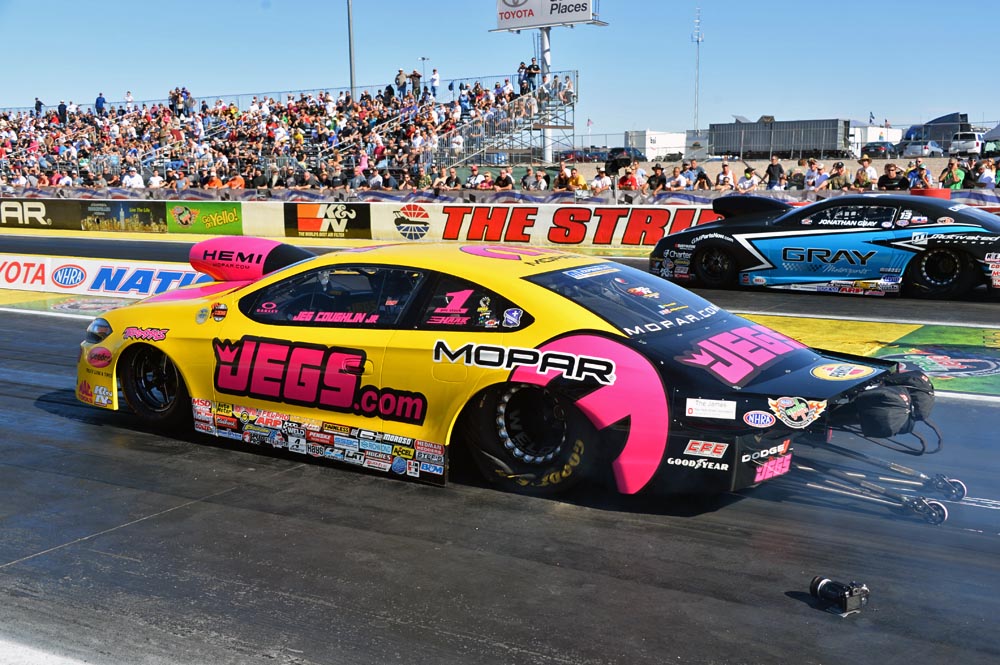 LAS VEGAS (Nov. 1) — Jeg Coughlin Jr. will try to continue his long run of success at The Strip at Las Vegas Motor Speedway Sunday from the No. 3 qualifying position after posting a scorching 6.597-second pass at 209.20 mph during a cool second day of time trials for the NHRA Toyota Nationals.

The five-time and reigning Pro Stock champion actually owned the No. 1 spot on the qualifying ladder after the third session, which was run earlier Saturday afternoon. But when temperatures dropped in the evening round, he couldn't contain the aggression of his JEGS.com/Mopar Dodge Dart and slipped a few slots to third.

"We made 3.8 good runs in qualifying," Coughlin joked. "We just let that last one sneak away a touch and that ended up being the best session. Either way, we're very pleased with the JEGS.com Dodge and we're ready to take the data from four really good runs and go into race day. I think we were second quickest of the first two sessions ans quickest of Q3 so all-in-all we can't complain."

"It's always cool to return to a track where you've had so much success," Coughlin said. "Fortunately for us, we have a lot of good tracks we like to visit but certainly Vegas is right at the top of the list.

"You add our record at this track in with the weather we had today and everyone starts smiling. It was nice yesterday, probably a high in the low 80s, but today that cloud cover and breeze cooled it right off and the cars really responded. It's fun for the drivers when you get fast conditions but I think the crew chiefs love it even more because they can just go for it."

By qualifying third, Coughlin earned a first-round date with youngster Aaron Stanfield, who qualified 14th with a best of 6.670 seconds at 206.57 mph.

"Whenever you have a field set in these sort of conditions, you know that anyone in the top 16 can beat anyone else," Coughlin said. "Aaron is a young, hungry driver that wants to prove himself so we'll need to be on our toes. I look forward to the challenge.

"I hope the forecast is correct and the weather stays like this because the fans will be in for a real treat. And us racers won't mind at all either."

Eliminations in Pro Stock begin around noon. All racing action will air on ESPN2.