Despite bizarre finale, Coughlin pleased with runner-up result in Pomona 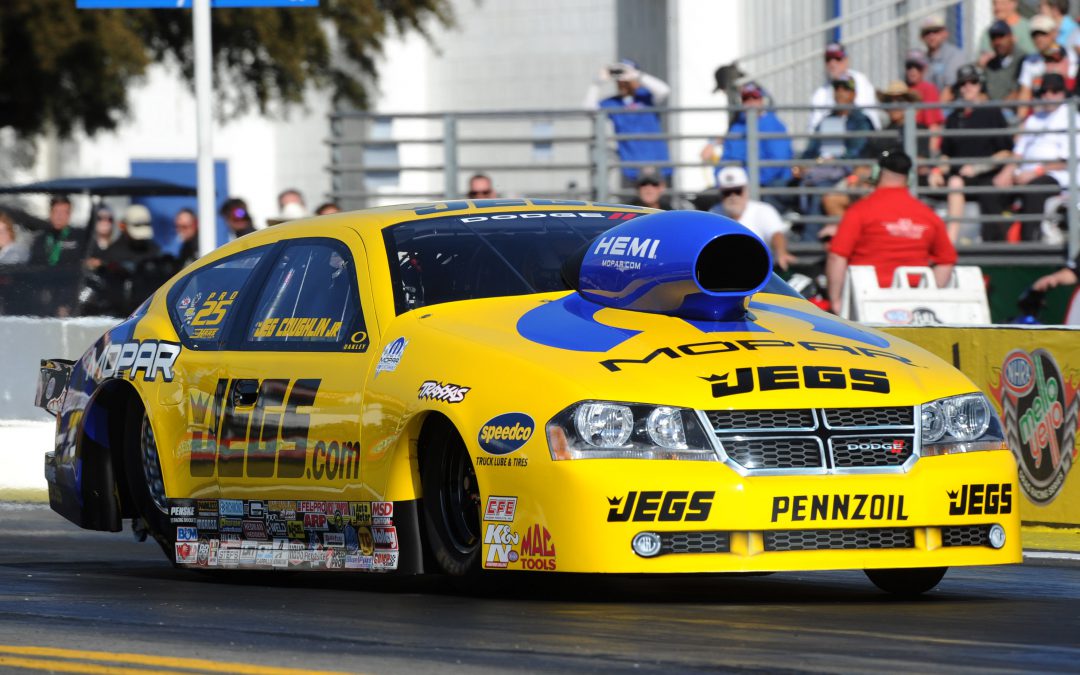 POMONA, Calif. (Feb. 17) — What originally looked like a bye-run into Pomona's victory circle instead turned into a bizarre red-light foul start for five-time world champion Jeg Coughlin Jr., but the 42-year-old drag racing star was still smiling after an impressive runner-up showing at NHRA's season opener.

After mowing down Steve Kent, Kurt Johnson and Vieri Gaines to reach his 86th career final round in the Pro Stock category, Coughlin entered the trophy round with lane choice over young, hot shoe Vincent Nobile. If that edge wasn't enough — the vast majority of races on the day were won in the left lane — Coughlin watched from the starting line as Nobile's car encountered trouble after his burnout, leaving him stranded a few hundred feet down the track.

"I saw they were having issues and I wasn't sure if they were going to have to push him back or what, but it was obviously going to take longer than normal, so I decided to wait for him," Coughlin said. "I shut my car off."

The incredible act of sportsmanship turned out to be costly as once Nobile managed to get his car in reverse and began making his way back to the starting line, Coughlin realized his JEGS.com/Mopar Dodge Avenger would not re-fire.

"A wire had come off the starter so I was stuck," Coughlin said. "The guys were scrambling and pretty much pulled the front end off the car to see what was wrong before they figured it out. This time, Vincent was the one waiting for me, even though the chief starter was waving him up to the line. It was pretty crazy.

"Even after all that I didn't see a red light coming. I'd been really pleased with my driving all weekend. It just kind of happened."

"This is the second year in a row we've started the season with a runner-up finish," Coughlin said. "The difference this time is that last year we were hoping that result was going to become commonplace, whereas this year we already have a really good idea that we can run with anyone in the class.

"Things couldn't have started much better for us with this new team configuration with Allen Johnson and J&J Racing. We're very excited about the season."

Coughlin will be back in action next weekend at the Arizona NHRA Nationals at Firebird International Raceway.