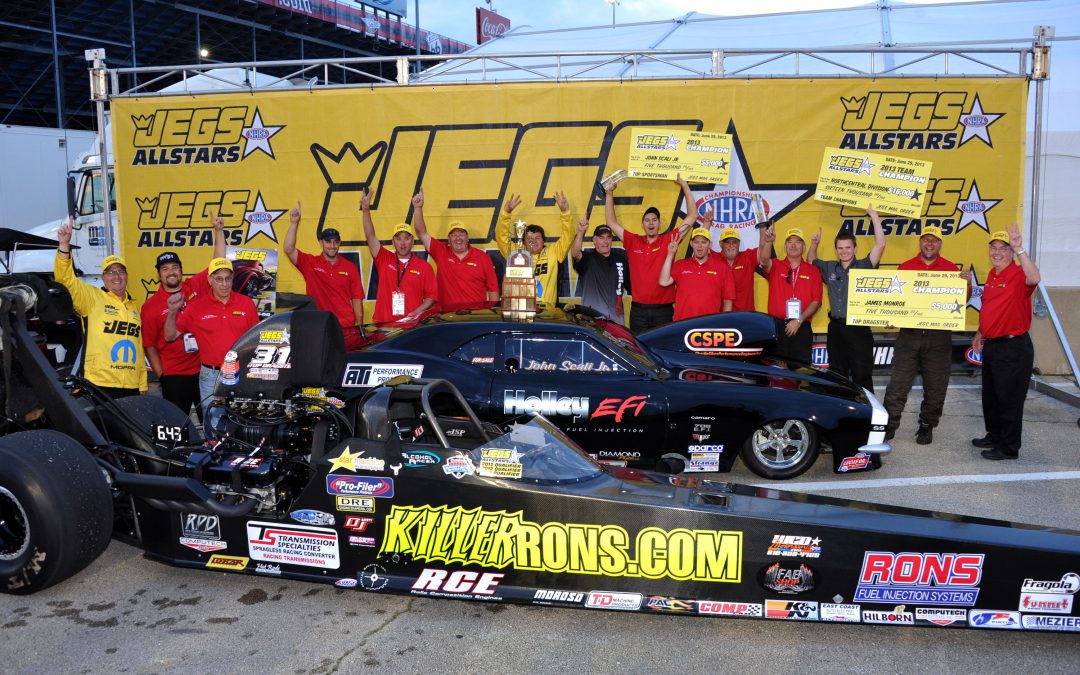 CHICAGO (June 29) — In what was nothing short of a landslide victory, the team from Jay Hullinger’s North Central Division won the overall team title in the JEGS Allstars event for the seventh time and first since 2009. The win moves the Division 3 team into a tie with the Division 1 team with seven overall victories.

Led by Top Dragster champion James Monroe, and Top Sportsman winner John Scali Jr., the Division 3 team racked up and impressive score of 1,300 points and never had to sweat as the second-place team from the Southeast Division finished well behind with 1,000 markers despite wins by Super Stock racer Mike Crutchfield and Super Comp ace Sherman Adcock.

Any lingering drama was over quickly as Monroe defeated Division 5s Phil Unruh in the Top Dragster final with a perfect 6.43 on his 6.43 dial. Unruh was not far behind with a 6.45 on his 6.45 dial. A few pairs later, Scali Jr. put an exclamation point on the championship with a final round win over Division 2 rival Jeffrey Barker in Top Sportsman.

Slate Cummings, retuning as the blocker in Super Stock and Stock, had a great weekend as he reached the final round in both classes. Cummings won the Stock final by beating reigning and two-time champ Brad Burton with a 10.48 on his 10.47 dial. A few minutes later, Cummings returned for the Super Stock final and lost a close when he broke out by three-thousandths against Division 2s Mike Crutchfield.

Adam Bowdish picked up a win for the Division 6 team after opponent Greg Kamplain of Division 3 broke in the final. Division 3 posted another runner-up finish when defending Super Street champion Ricky Shipp lost to Casey Grubb of Division 1, 10.90 to 10.92 and another when Mike Shelton lost a double breakout final against perennial Allstar Sherman Adcock Jr. of Division 2.

A week after posting a win and a runner-up at the inaugural event in Epping, N.H., Division 1’s Mike Sawyer reached the Super Gas final round but lost when he redlighted against Kevin Moore, who posted the lone win for the Division 5 team.

Dale Brand, making his first JEGS Allstars appearance in Top Alcohol Funny Car, scored a win for the Central Region when he topped East Region champion Todd Veney in another close final, 5.59 to 5.62.