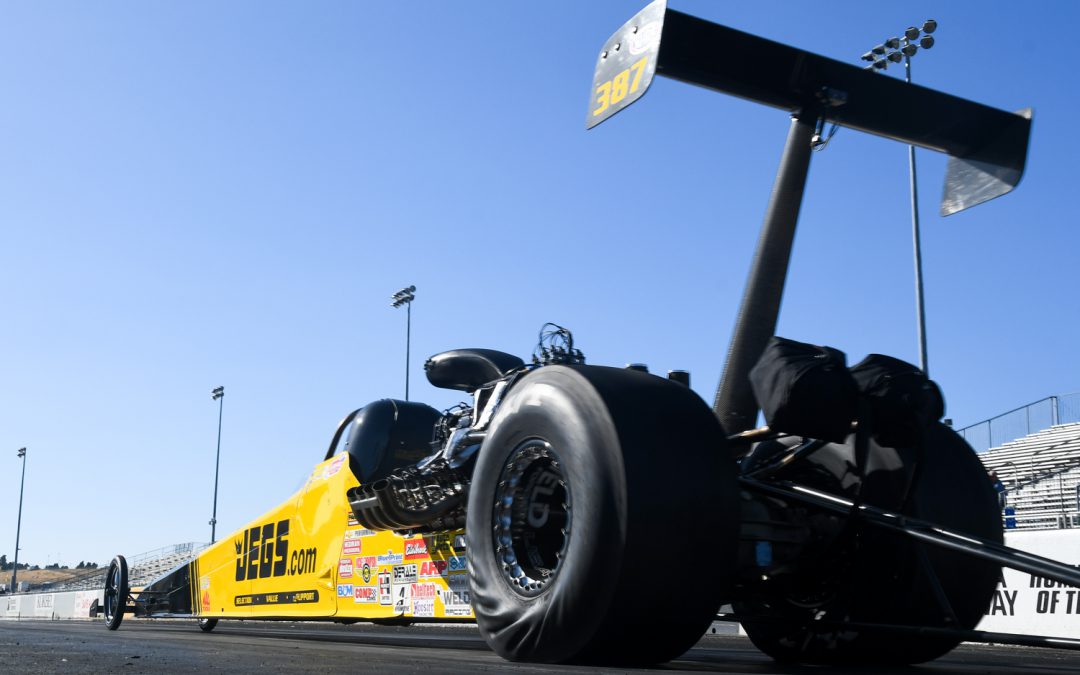 SONOMA, Calif. (July 21) — Fresh off back-to-back victories in Indianapolis and Chicago that catapulted him to the Division 3 points lead in Top Dragster, Mike Coughlin emerged from a double-header weekend at Sonoma Raceway Sunday afternoon with six more elimination-round wins to his credit.

"This JEGS.com Top Dragster is such a great car now," Coughlin said. "We changed blowers a month and a half back, went and tested it, and have now completed four races and it's been perfect. It reacts exactly the way we want it to every time and we're not hurting anything.

"Getting to the semifinals Friday in the first race was exciting. Out here in Division 7, it takes six rounds to win the race, whereas we almost always set 32-car fields at home so the fifth round is usually the final. This time it was the semifinals, but as far as points go it was the equivalent of a runner-up result in our division, so it was a pretty great result. We just got beat, straight-up, in a great drag race."

In Friday's race, Coughlin beat Mike MacBrair, Geneva Nash, Taylor Vetter and Steve Will before getting nipped by Jeff Havens in a double-breakout affair. Sunday, he lasted to the third round before a razor-close loss at the finish line.

"Today was one of those super-close finishes that could have gone either way," Coughlin said. "We were both double-0 on the Tree and pretty much dead-on at the other end. I could see we were close and I knew I couldn't catch him so I gave him the line thinking he might break-out. Instead he was dead-on his dial and I was over mine by a few thousandths. That was a fun race that just didn't go our way.

"Overall, this has been a great weekend and we earned a bunch more points. It's been a lot of fun racing a lot of people I've never met before. In D3, we all know each other and pretty much see the same drivers every weekend. Most of the racers out here I only know by name, but everyone has been so cool and welcoming."

Coughlin's recent hot streak has resulted in some changes to his schedule. He'll remain in Sonoma for next weekend's NHRA national event and then follow his brother Jeg Coughlin Jr., who races in Pro Stock, to additional national events in Seattle and Brainerd, Minn.

"Once we got this thing turned around and started having such great outings, it made us all extra excited," Mike said. "When you're running this well you don't want to stop. You feel this need to keep racing.

"My thanks goes out to my crew guys, Greg Cody, Tony Collier, and Dave Raurk, my three brothers for running things while I've been away, my wonderful wife Kriss, my Dad (Jeg Coughlin Sr.) and everyone at JEGS headquarters for allowing us to do this. We're having a blast."