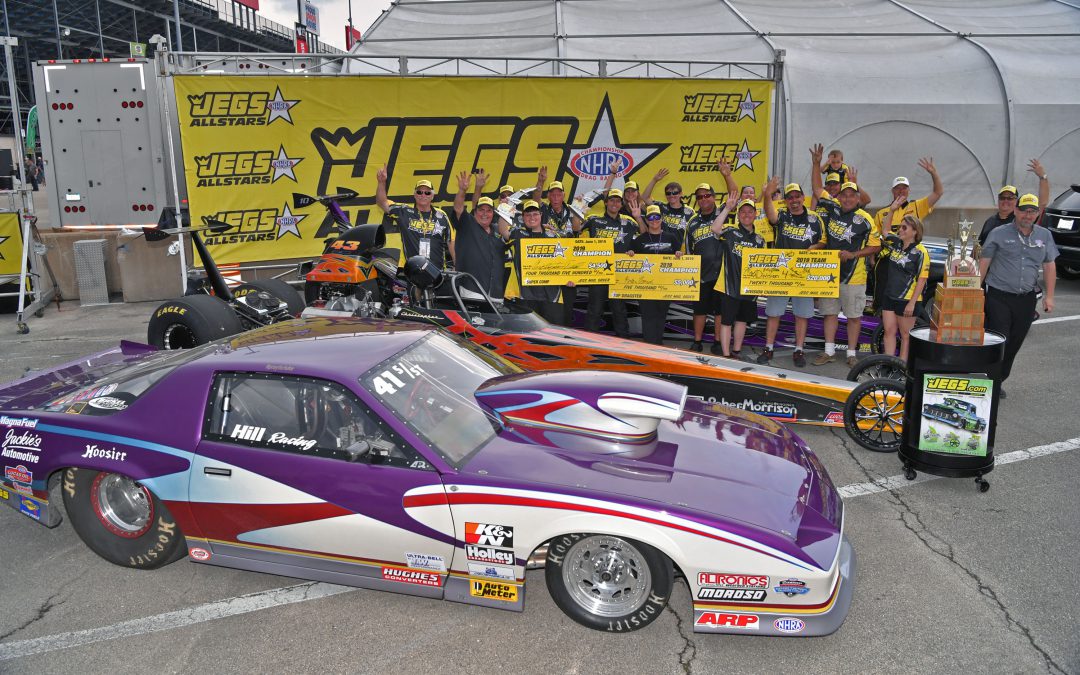 JOLIET, Ill. (June 1) — In an outstanding example of teamwork, the crew from NHRA's South Central Division earned the $20,000 bonus in the JEGS Allstars competition by putting four of their eight members into the winner's circle Saturday at Route 66 Raceway. It was the second-straight team championship for Division 4 and their eighth overall, tying the record previously held by the North Central Division team.

Heading into the trophy rounds, the battle was close between Divisions 1, 2 and 4. But the drama was short-lived after the Division 4 team went a perfect four-for-four in final rounds.

Lopez was first up in a crucial Stock final against Jeff Hairrington of the Division 2 team, where he drove his COPO Camaro to the win over Hairrington's Mustang by less than a hundred of a second. Next up was the Super Street final where Hill scored a narrow 10.92 to 10.93 win against Division 1 racer Keith Mayers. The deciding run came in the next pair when Dodd defeated Division 2 racer Ray Miller III in an impossibly-close Super Comp final. Dodd won with an 8.908, crossing the finish line just .0002 seconds ahead of Miller. With the title secured, Boesch felt no pressure when he drove past Division 7 racer Ed Olpin to win the Top Dragster title.

Aragona Jr. added to his impressive list of achievements when he stopped fellow Division 1 racer Doug Doll in the final of Comp Eliminator. Defending JEGS Allstars champion Aaron Stanfield had a perfect reaction time in the Super Stock final but it wasn't enough to take out Division 3 racer Jeff Dona, who had a .005 light of his own in a double-breakout affair.

A pair of past world champions tangled in the Super Gas final with Labbous Jr. getting the best of Iggie Boiscesco in a 9.89 to 9.88 double breakout. In Top Sportsman, Dinkel joined Division 3 teammate Dona in the winner's circle after defeating 2018 Allstars champ Lester Johnson in the final. Dinkel ran right on his 6.48 dial-in to take the win after Johnson broke out with a 6.38 on his 6.44 dial.

Joey Severance won the Top Alcohol Dragster crown at the JEGS Allstars for the fourth time when he stopped first-time finalist Rachel Meyer, 5.31 to 5.34. Meyer left the starting line first but came up just a thousandth of a second short at the finish line. Drew clinched the alcohol title for the Central Region when he drove his Mustang to a 5.50 to 5.59 win over Chris Marshall in the Top Alcohol Funny Car final.

Should any of the 10 JEGS Allstars champions repeat Saturday's wins in Sunday's Route 66 Nationals final rounds, they will receive a double-up bonus courtesy of JEGS Mail Order. All of the champions are automatically invited to return for next year's event as blockers in their respective classes.