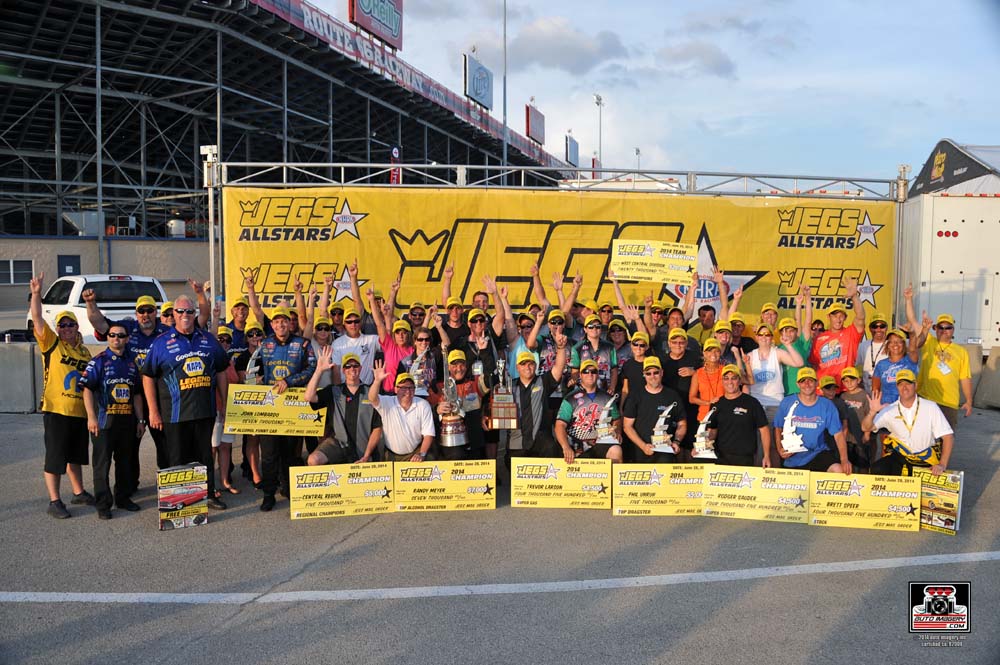 In 30 years of JEGS Allstars competition, Division 5 had never claimed possession of the perpetual trophy that goes to the winning team, but that changed when it earned 1,400 points at this year's event, easily topping second-place Division 2, which ended with 1,000 points. The winning team members shared a $20,000 bonus from event sponsor JEGS Mail Order.

Greg Kamplain, of Brownsburg, Ind., claimed one of two titles for the defending team champs from Division 3 when he drove his dragster to victory in Comp. Kamplain defeated Massel, whose turbocharged dragster slowed before the finish line.

A pair of Division 2 racers met to decide the Super Stock title, with Mike Crutchfield, of Montgomery, Ala., claiming the win over Gary Coccaro, who was entered as a blocker and could not earn points toward the overall title. Crutchfield also won JEGS Allstars titles in 1990 and 2013.

The Division 2 team also won in Super Comp when Ray Miller III, of Spring Hill, Fla., took the trophy with an 8.954 to 8.951 holeshot victory over Division 7 rep George Garbiso.

The Central Region team won the overall title in the special Top Alcohol Dragster portion of the JEGS Allstars competition thanks to a victory by decorated racer Randy Meyer. Hailing from Spring Hill, Kan., Meyer defeated West Region racer Joey Severance in the final, 5.36 to a shutoff 7.86.

In the Top Alcohol Funny Car final, John Lombardo Jr., of Brea, Calif., scored a win for the West Region by driving to a 5.66 to 5.76 victory against East Region rival Dan Pomponio.

The 10 winners are not only eligible to return as blockers for next year's JEGS Allstars event, but they can also earn a special double-up bonus from JEGS Mail Order should they be able to claim a second win during tomorrow's final eliminations at Route 66 Raceway.