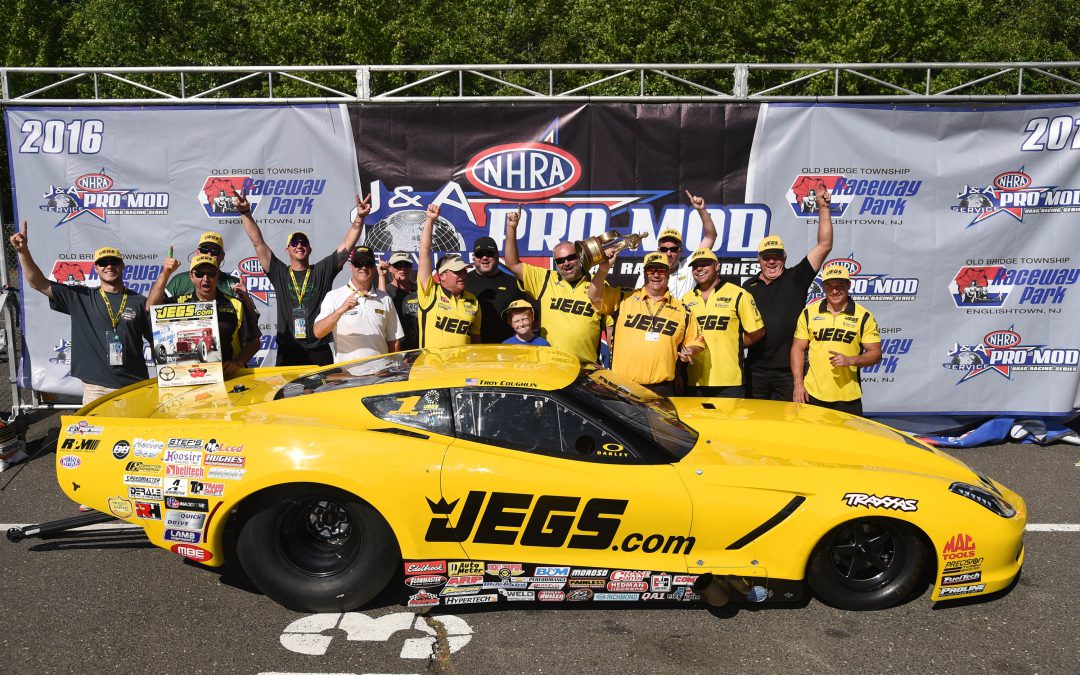 Coughlin left first on all his opponents Sunday, and his JEGS.com Corvette was the quickest in all three rounds of racing as he won for the seventh time in his career and the first since Charlotte in September 2014.

"What a day," Coughlin said. "For the whole JEGS.com team, coming into this race fifth in points and with a race car that's a competitor, it's great to get this win. We've just had a couple burdens here and there, but (crew chief) Steve (Petty) got it fixed up, and Mike (Rees) and Kyle (Pettis) put it together. We had a good hot rod all race. I'm pretty excited about it, for sure."

Coughlin won the 2015 NHRA Pro Mod Series championship but didn't win a race. But in the first race since NHRA added 50 pounds to turbocharged and nitrous cars, Coughlin's turbo Corvette proved its mettle.

"Winning the championship was really cool, and to do it without winning a race doesn't happen very often," Coughlin said. "In 2016, race No. 4, being a winner, is really awesome. With the way the competition is in the Pro Mod class, it gets tougher and tougher each year.

Coughlin was the No. 7 qualifier and beat Mike Janis on Saturday. That put him against Pro Mod stalwart Rickie Smith, but Smith's crew had to push his car off the starting line. Coughlin would have been hard to beat, as he made a pass of 5.846 seconds at 256.50 mph.

"The round we beat Rickie Smith was kinda cool," Coughlin said. "They had some type of malfunction in the car, and it wouldn't start, which is very odd for Rickie. He's usually low qualifier, winning races. He doesn't make mistakes and is a pretty good racer."

"His dad (Bob) and my dad (Jeg Sr.) used to race together," Coughlin said. "It's pretty cool to see the two generations continue to do battle. We're pretty blessed to be able to do that. It's pretty cool."

With the victory, Coughlin moved to second in the Pro Mod points standings after four races. Coughlin trails two-time winner Smith by 133 points with six races remaining in 2016.