Doubleheader Weekend for Coughlin – From Kansas to Indiana 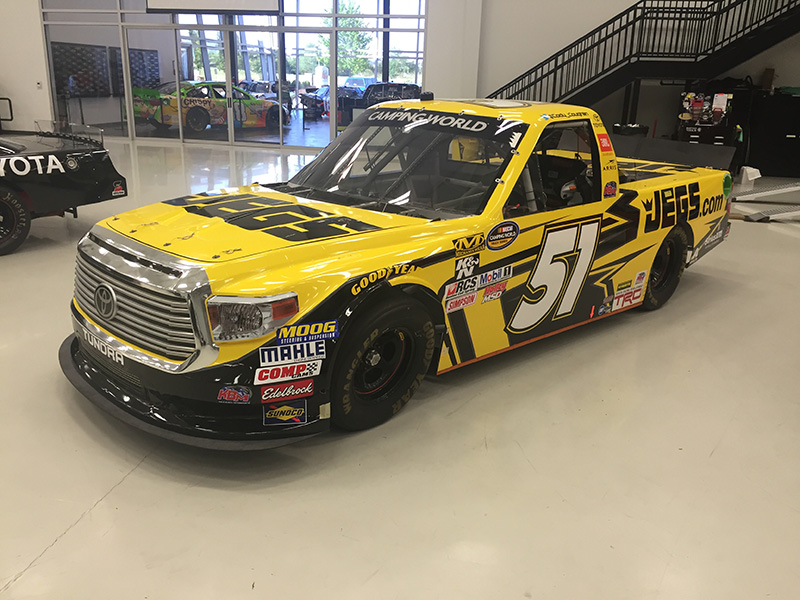 Cody Coughlin is itching to get back behind the wheel of his Kyle Busch Motorsports Toyota Tundra.  That opportunity comes this weekend as Coughlin will race under the lights on Friday in the Toyota Tundra 250 at Kansas Speedway.  This will be the the Joe Gibbs Racing Development Driver’s second NASCAR Camping World Truck Series start in 2016.

Friday night will not be the first time Coughlin races in the Sunflower State.  He’s competed in an ARCA Racing Series event at Kansas in 2014 and scored a fourth-place finish.

While the 20-year-old driver has had success in Kansas, the stock cars of the ARCA are quite a bit different than the sleek machines of the NASCAR Camping World Truck Series.

“I think it's always great to go back to a track you have run on, even if it was a different series and especially one we ran well at.  It’s definitely a positive,” said Coughlin, who won a Super Late Model race at Toledo Speedway in April.  “Even though the trucks handle a bit differently than the ARCA cars, I know the line at Kansas and how to race in traffic there, so I think we’ll have a good day with the team I have behind me.”

Friday night will be the Delaware, Ohio driver’s first race with Daytona 500 winning crew chief Kevin “Bono” Manion at the helm.  To build chemistry, Coughlin and Manion worked together at a couple of test sessions, at Atlanta Motor Speedway (GA) and Bristol Motor Speedway (TN).

“I think the first race with Bono will be great,” said Coughlin.  “He has a lot of experience to pass along to a rookie like myself so I'm excited to put it all together to hopefully have a good run.

“Everyone on the number-51 JEGS.com team is looking forward to getting to Kansas this week for our first race working with Cody,” Manion said.  “I don't see any reason why the first time out with us Cody can't run somewhere inside the top 10 for most of the race, and then when he's got some laps under his belt at the end of the race, make his move forward."

The race at Kansas is not the only event Coughlin will be competing in this weekend.  The second-half of his doubleheader weekend will bring him to Anderson, Indiana on Saturday.  He will compete in the ARCA/CRA Super Series event on the quarter-mile track in his Toyota Camry Super Late Model.

Two races in two very different vehicles in two different states in two days; it’s a challenge that Coughlin is eager to accomplish.

“I’ve done back-to-backs before, but never in such extreme circumstances,” Coughlin said.  “I know that Bono and the KBM guys will prepare me a great Toyota Tundra, and I know my Team JEGS guys of Jack Smith (crew chief), Kevin Hamlin (team manager), Scott Wimmer (crew chief) and Dave Holt (crew member) will prepare me a great Late Model for Saturday.  I can’t thank everybody enough that help make things like this happen, especially my parents, Di and John, and my little sister Kennedi.  They all support me so much.  And of course none of this would be possible without our Lord and Savior who continues to bless us every day.”

On Saturday, Coughlin will have one hour of practice at Anderson in the Super Late Model beginning at 4 p.m. ET.  Qualifying will take place at 6:30 p.m. with the 125-lap feature to follow at 8 p.m. ET.