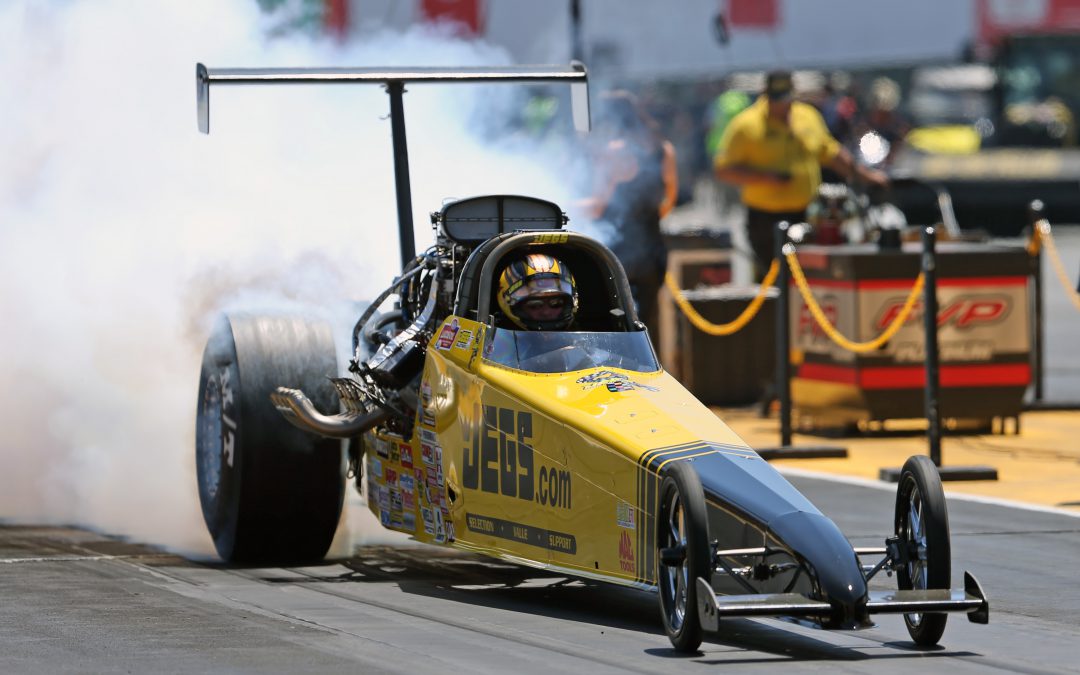 DELAWARE, Ohio (Nov. 10) — After sweating out the final results of the last Top Dragster race of the year in Las Vegas, Mike Coughlin officially bagged the Division 3 championship in his category on the strength of a stellar summer season that included two crucial victories and a string of impressive finishes.

Combined with his two Top Sportsman D3 titles from 2007 and 2009, Coughlin is now a three-time titlist, adding yet another glorious chapter to his family's racing legacy.

"I feel a great sense of pride," Coughlin said. "I'm so happy for my crew guys, Greg Cody, Dave Raurk and Tony Collier, and everyone else who's helped us along the way. The support I get from my brothers John, Troy and Jeg, along with my dad, my wife Kriss and our sons Clay and Jack, plus the 400-plus associates at JEGS has made this all possible and I'm just so pumped and relieved it ended up this way."

Having done most of the heavy lifting in the summer months, Coughlin was challenged late in the year by Danny Nelson, who came ever-so-close to catching and passing Coughlin during this weekend's Division 7 finale at The Strip at Las Vegas Motor Speedway. Had Nelson won the race, he would have stolen away the D3 championship from Coughlin, and Nelson's impressive run down the stretch had everyone nervous.

"We've been on pins and needles the last three weeks waiting for this event because our last race we went out early and Danny ended up winning it so that tightened things up quite a bit," Coughlin said. "He was so strong this fall, winning a bunch of rounds and races and it just seemed it might not be our year. But he ended up losing in Round 3 this weekend and that gave us the title by 10 points. It was a huge sigh of relief. We finally got some late-season luck.

"We've known Danny for probably 30 years and he was quick to send me a text congratulating me on winning the D3 title. Of course. he had a great 'consolation' gift by winning the national title so I texted back and sent along my congratulations as well. Classy move by a great racer. He definitely kept it exciting."

Coughlin says the crux of his championship chase was the mid-season switch to a Fowler F-12 roots-style blower built by Columbus, Ohio-based machinist Jeff Fowler.

"It was the perfect combination for our ComSYNC EFI system that Ryan Micke put together for us and the ProLine motor we use," Coughlin said. "The car became so consistent. We won Indy and Chicago and were going deep in just about every other race. The points started stacking up in our favor. Jeff and his staff even helped us fix the motor after we hurt it at one point and we never missed a beat."

In addition to his title, Coughlin is a nominee for Sportsman Driver of the Year in Division 3. He'll find out if he can add that honor to his resume at the season-ending banquet in December.