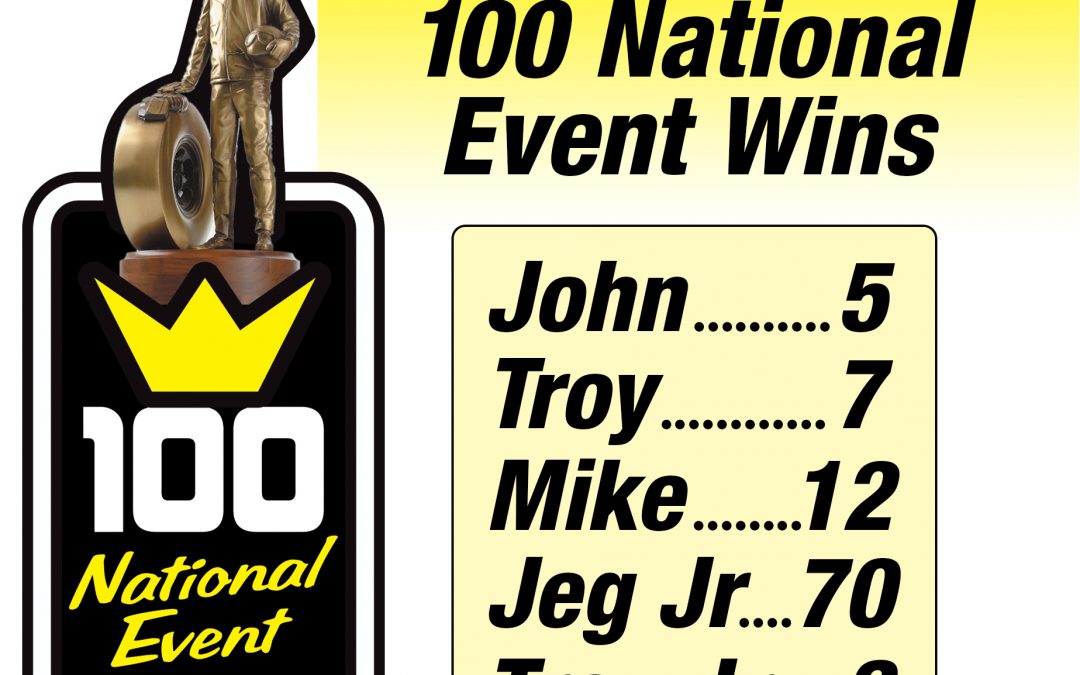 DELAWARE, Ohio (Aug. 28) — One of drag racing's preeminent families enters the historic U.S. Nationals with triple digits on their minds. The racing Coughlins, of Delaware, Ohio, have collectively gathered a staggering 97 national event victories in their careers, meaning the 100-win milestone could be reached this weekend at the sport's most prestigious and longest-running event.

It's a quest filled by five family members — brothers John, Troy, Mike and Jeg Jr., as well as third-generation pro Troy Jr. — and it places the prodigy of JEGS High Performance founder Jeg Coughlin Sr. in a category where only a few have gone.

"Growing up in the sport, I can remember very early in my life listening for the mailman's old army truck to come down our street so I could run out there and get our copy of National Dragster to see who won the latest races," said Jeg Jr., who has earned 70 of the 97 trophies his family has collected. "I could hear that old truck in my room because he had to down-shift to get to the mailbox and I'd sprint out there to meet him.

"To go from that beginning as a little kid to sitting here talking about our family nearing the 100-win mark is just incredible."

The love of the sport and the relentless hunt for "Wally" trophies was engrained in Jeg Jr. and his brothers from the start as their famous father filled his days with quarter-mile pursuits, both as a business owner that provided hard-to-find racing parts for his customers to a racer himself that plied his trade in the days before multiple national events.

"NHRA drag racing and the high performance parts business has been a part of our lives since we were born," Jeg Jr. said. "Whenever we'd go help Pop when he was racing, my brothers and I would just talk non-stop about when we'd be old enough to race. It's driven us for years.

"As a driver, the No. 1 goal is to get that Wally. Pop may have raced in a different era, but he was after the same thing. It's so iconic. It's the symbol of success in drag racing."

Eldest brother John, a multi-time divisional champion who has won five times at the national level in three different classes, credits his parents as the impetus for the group's combined success.

"Mom and Dad encouraged us to chase our dreams," John said. "As a parent of a son that races now, I know how difficult of a decision it must have been for them to let us hot rod around but they made sure we were safe as can be and then let us loose. They deserve so much credit.

"I look at 97 wins and the first thought I have is that Jeg has just been phenomenal. I know a lot of guys who have gone their whole career without winning a national event. For Jeg to have 70 is off the charts. I'm proud of him and I'm pretty darn proud of the rest of us too."

Although the youngest of the four sons, Jeg Jr. was the one that got the national event victory tally going in 1990 when he took the Super Gas title of the Spring Nationals near Columbus, Ohio.

"Getting that first Wally for our family at a national event still ranks as one of my all-time greatest moments," Jeg Jr. said. "The fact it happened at our home track, National Trail Raceway, during the Spring Nationals, which was the race we all pointed to every year as the big one, was just incredible. It set such a great tone for what was to come.

"Here we are a little more than 20 years later and the tally is at 97. That's exciting, especially going into Indy with a chance to reach 100 there. I'm going after the Pro Stock trophy, my brother Troy will be racing Pro Mod and my nephew T.J. is racing in both Super Gas and Super Comp, so there is a possibility."

Fresh off a win at a divisional race in Bowling Green, Ky., Troy Jr., the son of Pro Mod world champion Troy, represents a third generation of Coughlin's that is sure to add to the total in the year's ahead.

"It's a privilege and an honor to be a part of anything with my dad and uncles," T.J. said of contributing three national event wins to the ledger, all at the sportsman level. "My personal goal now is to take it to 200.

"I think the third-generation of Coughlins can add their own chapter. Not just me; but my sister Meghan wants to get back in the seat and my some of my cousins already race a bunch in their Jr. Dragsters. They'll be winning national events when their 18, for sure. Maybe some of the other younger kids will want to race too. I hope they all do because I love it."

Of course, Troy Jr.'s biggest fan is his father, who has seven national event wins of his own, claiming victories in Super Gas, Pro Stock and Pro Mod over the years.

"T.J. might break all the marks," Troy said. "He certainly has the capability and the drive to succeed. His mother and I are just so proud of him.

"Wow, what an accomplishment to be this close to 100 wins. Thank God for Jeg or we'd only be a quarter of the way along. He's had quite a career so far. I'm proud of all of us, truthfully. And it's really neat that we've all contributed to the total because we've always put family first."

Like John, Mike Coughlin has primarily earned his racing stripes — which include a pair of Div. 3 championships — at the sportsman level. But his 12 national event wins, which occurred in Pro Stock Truck, Super Comp and Top Sportsman, rank him second among his siblings.

"It's quite a milestone," Mike said. "I'm so honored to be a part of it. I personally don't run many national events any more, maybe two or three a year, but it would be great to add a few more to the total before I'm done.

"I think we'll hit 100 before the year's over, maybe even this weekend at Indy. Troy Jr. is real hot and Jeg and Troy have both won races this year. It would be neat to see it happen there because that race has so much history."

No matter when the mark is reached, it seems clear the Coughlin's will race and continue to win well beyond 100. Jeg, a five-time world champion, is far from finished himself, a sentiment shared by his brothers.

"I don't feel like I'll ever leave the sport," Jeg said. "I'll always be chasing those Wallys. I won't be racing Pro Stock forever, but certainly I'll stay active in the sportsman ranks. My passion is just as strong as it was when I'd run out to the mailbox as a little boy, looking for the National Dragster. I think we all feel that way."