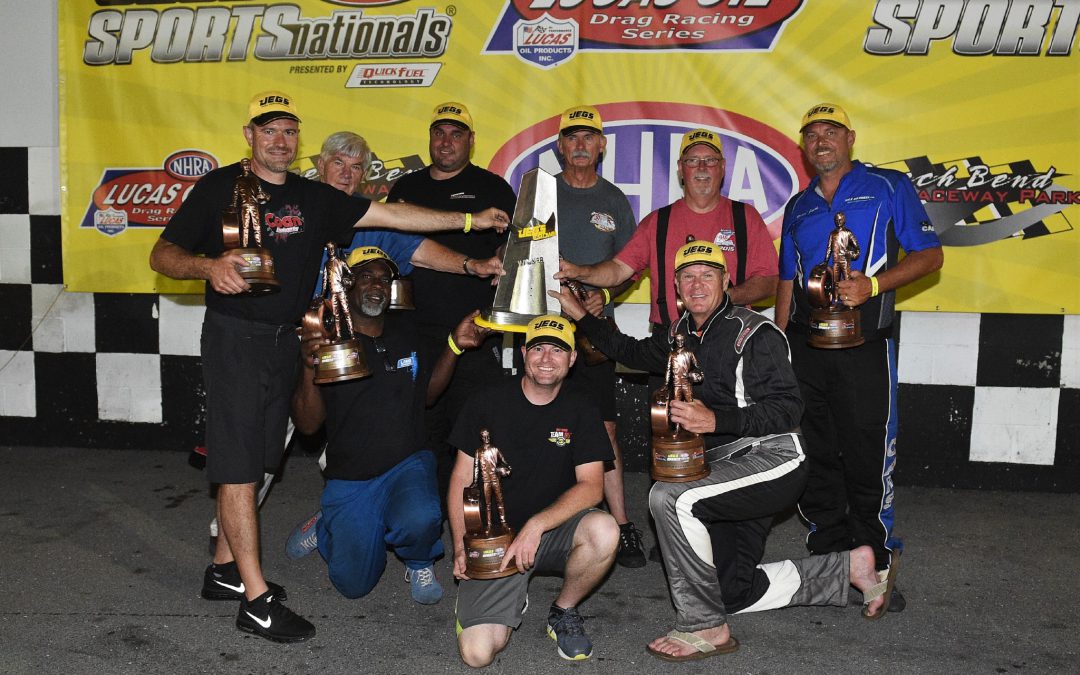 Bowling Green, Ky. (May 23, 2018) – One of most sought-after trophies in drag racing is up for grabs at Beech Bend Raceway Park in Bowling Green, Kentucky, for a third consecutive Memorial Day Weekend on May 25-27. The NHRA, in a partnership with JEGS Automotive, Inc. (JEGS), one of the largest e-commerce and mail order high-performance auto parts retailers worldwide, present the annual JEGS SPORTSnationals, giving eight decorated drag racers the chance to win the coveted JEGS Crown, a prize purse of more than $108,000, with special bonus races and national event contingency payouts.

"The JEGS SPORTSnationals has been a big deal among sportsman racers for many years," said JEGS Owner and Driver of the Team JEGS Top Dragster, Mike Coughlin. "The Beech Bend Raceway Park venue, family atmosphere of Memorial weekend, and the ever-growing competition surrounding the JEGS Crown makes this a must-attend event.”

Much like race fans, race weekends at the track for sportsman are a family affair. To ensure that race teams and their families make the most out of the holiday weekend, JEGS, the NHRA and the Dallas Jones family will host a special southern style cookout for the competitors on Friday evening. The cookout will take place in the “Shady Grove” pavilion adjacent to the pit area following the racing activities. Families can also take part in a special JEGS Family and Friends Night at Beech Bend Amusement Park and Splash Lagoon Water Park.

“JEGS is a family-owned company with an authentic tie to drag racing that has existed since the days of Jeg Coughlin Sr. strapping on a helmet at the track, said JEGS CEO, Jeff Hennion. Sponsorships like the JEGS SPORTSNationals race is an investment we are proud to make, and we are equally as proud to give race fans and their families an exciting experience this Memorial Day weekend.”

“Winning that [JEGS Crown] would be awesome. I’ve been fortunate enough to win this race three times including last year, and I feel like we’ve got a car that is capable of winning again. I also love racing in Bowling Green. It’s always been one of my favorite tracks and we’ve had a lot of success there. I try to never miss a race in Bowling Green.”

“Last year, that was my first [national event] win in Super Stock—and it was great. I can’t imagine what it would be like to go back and do it again, but we’re sure going to try. Winning that [JEGS Crown] trophy would be icing on the cake.”

“I would not miss this race for the world. I want a chance to get that special trophy. It was cool, last year I actually got to touch it and now I’d like to win it. I’ve got the same Cobra Jet Mustang as last year and we’re going to Bowling Green this weekend for the NMCA race. It would be a huge career highlight to actually pull it off. It should also give us some good notes to carry over to the following week.”

“It would be nice to win that trophy. We won the Four-Wide Nationals in Charlotte a couple of weeks ago, so I like our chances. If I drive the way I did in Charlotte, I don’t see any reason why we couldn’t pull this off. I’ve got a really good car right now—it’s very dialed-in. I also have a lot of help from fellow racers Brad Plourd, Sherman Adcock Jr., David Tatum, and Kevin Kleineweber. I’m also racing in Super Street, so winning both would be the ultimate goal.”

“That would be great to win the JEGS Crown, wouldn’t it? I believe I’m the only guy in Super Gas who can do it. The story has always been that if you’re not there you can’t win, so we’re going back. The win last year was just one of those days. We were late getting started and we ran the whole race in one day—it all came together. For an old guy, it was a good day and I really enjoyed it. My wife even said, ‘I don’t think I have seen you that calm in a long time.’ I enjoy racing in Bowling Green. It’s always been one of my favorite tracks. There are a lot of good people there and they make it fun.”

“I haven’t run the Top Sportsman car much, but I believe I’ll take it out for this race. I have a graduation to attend with my daughter on Friday, but I did the same thing last year with my nephew and it worked out. I missed Friday’s runs but came back on Saturday and ended up winning the race. I did something similar years ago when I graduated high school. I went to graduation with my Stocker behind my truck, and then went right to Bowling Green and won my first divisional race. I’d love to do that again and win that trophy.”

“I’m excited about the race. In fact, we decided to focus on testing last week, so we can be in good shape for the SPORTSnationals. We would love a shot at the JEGS Crown. That is a cool trophy and it’s something we feel like we have a pretty good shot to accomplish. This year, we’ve also got a 32-car field that I think will be great. This will make qualifying very exciting and I can’t wait to see what happens. Last year, we had two of the best cars in the country and we thought about making a change, but we decided to stay with the nitrous combination and try to perfect what we had. I hope that will turn out to be the right decision.”

The racing continues on Saturday with bonus C-Tech Fast Four Shootout races in Comp, Racing RV’s Top Dragster, and Top Sportsman. K&N Super Shootouts will take place in the three Super-eliminator categories: Super Comp, Super Gas, and Super Street. The fans will also be treated to heads-up, wheel standing class racing in Stock and Super Stock, which takes place on Saturday and will feature the Hemi Shootout for the popular ’68 Hemi Barracudas and ’68 Dodge Darts.

Eliminations for all classes will be held on Sunday with National points at stake in the NHRA Lucas Oil Drag Racing Series including Comp, Super Stock, Stock, Super Comp, Super Gas, Top Sportsman, and Top Dragster categories while Lucas Oil Divisional points will be awarded in Super Street and Sportsman Motorcycle.

JEGS Automotive, Inc. (JEGS) is one of the largest e-commerce and mail order high-performance auto parts retailers worldwide. Founded in 1960 by racing legend Jeg Coughlin Sr., JEGS remains family-owned to this day and offers more than 1 million SKUs available for purchase. The JEGS corporate headquarters is located in Delaware, Ohio, and is home to a 225,000-square-foot warehouse and distribution center, two state-of-the-art call centers, the Coughlin Family classic car and truck collection, the Team JEGS racing research and development facility and The JEGS Foundation. For more information, call (800) 345-4545 or visit us at www.JEGS.com.