Driving his own off the assembly line made Jeg Coughlin Jr.’s Jeep purchase extra special 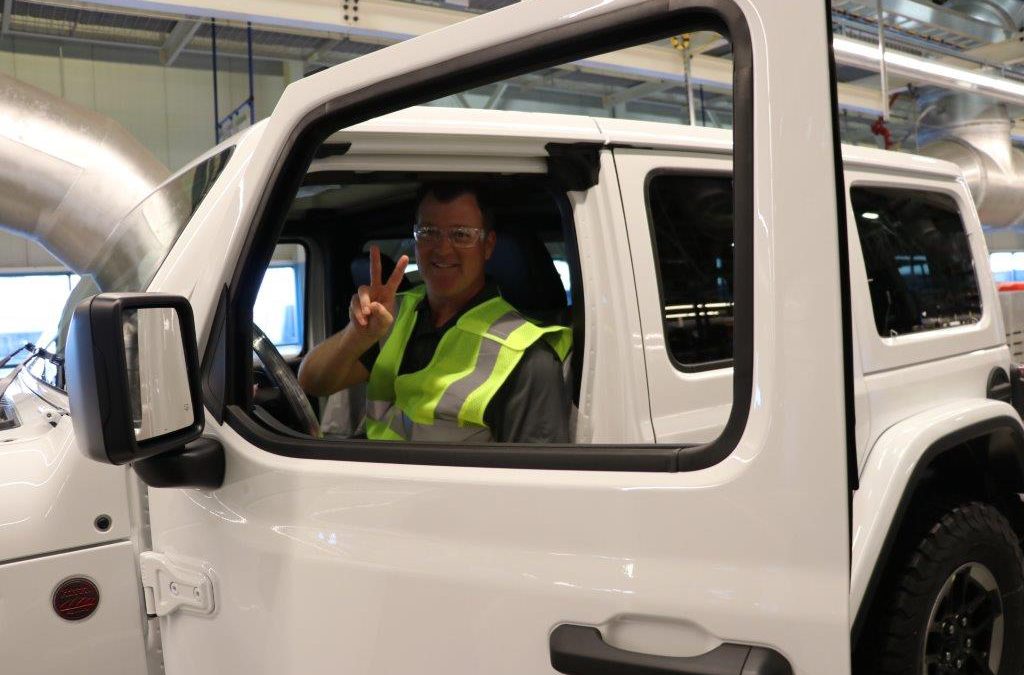 DELAWARE, Ohio (May 21) — It's always a thrill to buy a new vehicle. It's dramatically more so if you have the chance to actually drive your new vehicle right off the assembly line. That's exactly what six-time world champion drag racer Jeg Coughlin Jr. got to do in 2018 when he purchased a new Jeep that was assembled in Toledo, Ohio.

"It was truly an amazing experience and made that particular Jeep very special to me," Coughlin said. "I was the first butt in the seat, as they say, and I feel a real connection to my Jeep. I keep it down in Florida, where it's the perfect cruiser for the beach."

Coughlin's special opportunity to visit the Jeep Plant at the Chrysler-Toledo Assembly Complex came from his professional relationship with Mopar and a long-standing offer from former Plant Manager Bruce Schabeck. Coughlin competed in a Dodge Avenger and a Dodge Dart in the past, winning the 2013 Pro Stock title in the HEMI-powered JEGS.com/Mopar Avenger.

"With the Toledo plant just a few hours away Bruce set up a deal where we could go up and have a tour of the facility the same day my Jeep was being assembled," Coughlin said. "We actually started the process with our friends at Coughlin Jeep in Marysville. Although we share the same name, we aren't related, but they are good friends and great people. We've done a lot of business there through the years.

"As you may imagine, it takes a ton of coordination to order a vehicle the way you want it and then have it come to life before your eyes. We were able to follow the build through the entire process, from the initial plans and scheduling of when all the specific components would come together on through to the build itself."

It actually takes less than one full day for a Jeep to be built. Coughlin was alerted to the day his Jeep would be assembled so he headed north to watch it happen. He was greeted by Jeep's JK/JT Quality Center Manager Chad Kamm, a drag racer himself who regularly competes in a 23T Altered at nearby Milan Dragway.

"We arrived with about three hours of the build left," Coughlin said. "Chad took us straight to the assembly line and found my Jeep. It had just reached the point where the body panels were being installed. We watched as they installed the drive-train, the seats, a lot of trim, and the door pieces. It's incredible to see the professionalism and the coordination of all these different parts coming together right before your eyes.

"I've been fortunate to see a lot of factories and assembly lines for all kinds of things through the years but this one was just mind-boggling. You could certainly feel the pride the workers there had in what they were doing and in the units they were producing each day."

During his visit, Camm allowed Coughlin to drive a Jeep Rubicon through the elaborate testing grounds outside, where the full capabilities of the machine are revealed in actual practice.

"Until you drive those things to their limits it's hard to fully appreciate what they can do," Coughlin said. "The turns they can make, the angles they can traverse, the climbing abilities of that vehicle; it's all quite remarkable. They can handle way more than you would ever think to take them through in a normal day."

After having some extracurricular fun, Camm made sure Coughlin was ready at the end of the assembly line at the right moment.

"At the very last station they put 12 gallons of fuel in the tank in about four seconds," Coughlin said. "Then it came forward and they allowed me to jump in there, fire it up, and drive it off the assembly line.

"I've always been a fan of Jeeps. I had a couple when I was younger and my friends and I would go 'Jeeping' through the woods and what-not. But I don't know if any Jeep experience can beat that feeling right there.

"They also allowed me to write a personal note to all the workers who had touched my Jeep on its way through the plant, which was really neat. I added a photo of our championship-winning Dodge from 2013 and a huge 'Thank you' to each of them."