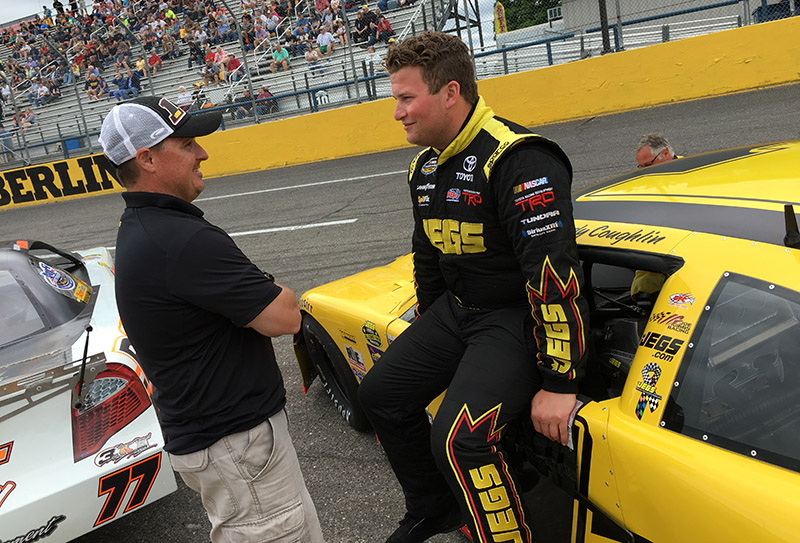 After starting back in the 16th position, Cody Coughlin carefully worked his way through the field to a solid top five finish in on of the crown jewel Super Late Model races in the country, the Battle at Berlin 251 at Michigan’s Berlin Raceway.  Coughlin came home in the fourth position Monday, just two days after finishing second in the JEGS/CRA All-Stars Tour 100 at Berlin.

“It was a successful weekend,” Coughlin said of the ARCA CRA Super Series 251-lap event.  “We were really close to achieving something awesome here, but we came up three spots short.  That’s a little tough to swallow, but this was still a great weekend at a track that I’ve struggled at a lot in the past.”

The dual CRA points leader and Joe Gibbs Racing Development Driver carefully worked his way into the top 10 by the first 10-minute break at lap 100.  By lap 200 Coughlin had worked his way up to fourth where he would eventually finish.

In the closing laps of the race, Coughlin and his ARCA/CRA Super Series points competitor Dalton Armstrong made contact, resulting in Armstrong getting into the turn four wall.  Coughlin immediately apologized over the public address system about the incident.

“We had an unfortunate situation there,” said Coughlin.  “It wasn’t intentional, but it happened.  I feel bad for those guys.  It was a miscommunication between me and my spotter and unfortunately they got the worst of it.”

The 20 year-old racer also competed in the NASCAR Camping World Truck Series on Friday night at Texas Motor Speedway for Kyle Busch Motorsports.  He finished 12th in his No. 51 JEGS.com Toyota Tundra.

Coughlin is now looking forward to his next race with the JEGS/CRA All-Stars Tour at Indiana’s Salem Speedway on Saturday, June 18.

“We had a solid weekend with a second on Saturday and fourth tonight and we continue to learn in the NASCAR Camping World Truck Series,” Coughlin said.  “We’ve been good on all sorts of tracks, flat and banked, so I think the JEGS.com Toyota will be good.

“I have to thank all my guys for all of their hard work.  My crew chief, Jack (Smith) gave me another great car.  Kevin (Hamlin, team manager), Scott (Wimmer, spotter), and Dave (Holt, crew member) work so hard and I can’t thank them enough.  I also have to thank my parents, Di and John, for their endless support and my sister, Kennedi as well.  And of course I have to thank God for keeping me safe once again.”