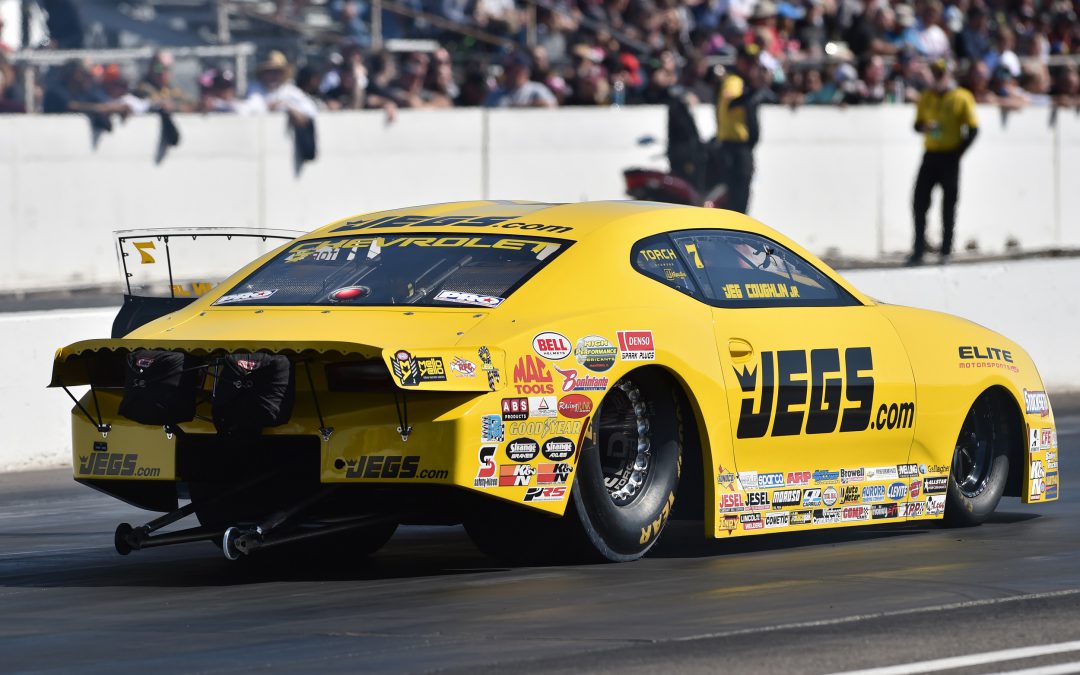 GAINESVILLE, Fla. (March 13) — Jeg Coughlin Jr. has his sights set on a third visit to the winner's circle of Gainesville Raceway during this weekend's 49th annual Amalie Motor Oil NHRA Gatornationals. And after a successful test session for the entire Elite Motorsports group, Coughlin thinks another trophy run is well within reach.

"We found a few things that appear to be giving us the consistency and efficiency we've been lacking at the first two races of the year," Coughlin said. "The JEGS.com Chevrolet Camaro has been a little lazy between 100 foot and 3-400 feet and we look for more favorable results this weekend.

"I believe the team has fixed what's been ailing us to a large extent and I'm pretty excited to get on the track and see how we match up. The weather looks to be a little warmer than what we've seen so far so we'll dig into the database and find a good tune up. We've won here before and we'd love to do it again this time through."

"It's a big weekend on a number of fronts," Coughlin said. "Aside from our Pro Stock efforts, my brother Mike is racing Top Dragster and my nephew Troy Jr. is making his debut in Top Alcohol Dragster. My father-in-law Al Kenny also will be competing in Top Dragster, and my brother-in-law Jason Kenny will be racing in both Super Comp and Super Gas. If I'm not in my pit, I'll likely be cheering someone on from the starting line or the fence.

"My dad, who lives here in Florida, is turning 80 on Thursday and he'll be over visiting with us this weekend, so that will be fun. Plus, my brother Troy is getting his championship jacket and ring on Sunday, so we have lots to be excited about."

"I'm extremely excited to race Top Alcohol Dragster with this team," T.J. said. "My Pappy (grandfather Jeg Coughlin Sr.) raced this class back in the day and it's an honor to follow in his footsteps, especially making my debut on his birthday weekend.

"I'm really wanting to let this car do the talking for us this year and I think it has a lot to say. This entire team, Mr. McPhillips and his son Rich Jr., Duke Roney, Andy Good, TJ Rebert and Charlie Wrotten, they're all about winning. They are a true racing family that is truly capable of running for the national championship.

"It's a big weekend for us. It's Pappy's birthday, my Uncles Jeg and Mike are racing here, and my Dad is being presented with his championship jacket and ring during Sunday's prerace ceremony. I'm just in awe of my dad and it's gonna be a special moment to see him close out his career on that stage. Maybe we'll end up on that same stage at the end of the race."