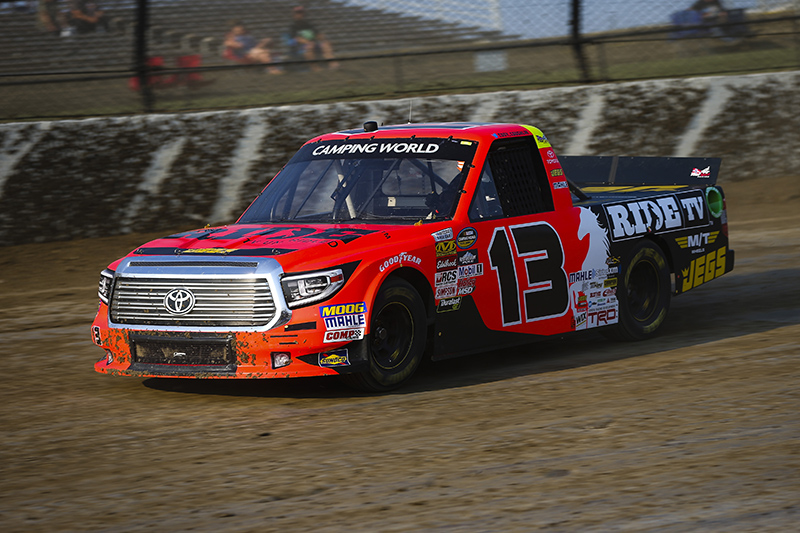 Cody Coughlin hit the dirt at Eldora Speedway in his home state of Ohio on Wednesday night for the second race on dirt in his career. He walked out of the legendary half-mile oval with a career-best finish. After starting 27th, and in front of many friends and family, Coughlin finished in the 11th position, one better than his previous career-best finish of 12th at Texas Motor Speedway in June 2016 and at Daytona International Speedway earlier this year.

“I don’t know what we found for the 150-lap feature, but it worked,” said the 21 year-old Coughlin. “I never would have thought that my career best finish would come at a dirt race, but I’m very happy about that. These two days were tough, but running through the field like that was a lot of fun.

“Plus this is Tony Stewart’s track; I’ve always admired him and what he has done.  We had a chance to catch up and I told him how cool it was to race on the dirt at his place.”

The Delaware, Ohio native’s time at Eldora Speedway got off to a rough start during practice on Tuesday night. Coughlin spun around and hit the wall in turn three. His ThorSport Racing crew worked hard to fix the JEGS.com/RIDE TV Toyota Tundra for final practice.

When the green flag waved on the 150-lap feature Coughlin went right to the bottom of the track and started to head to the front of the field. The hard-charging Coughlin was up to 11th by the end of the first stage of 40 laps.

After a long, grueling race for all competitors on the dirt of Eldora, Coughlin found himself in the 11th position, the best finishing position of his young NASCAR Camping World Truck Series career.

“I am so thankful for the hard work that all of my guys put in to get this truck fixed yesterday night in practice, and for everything they did today to help me out. We’re closing in on our first top 10 finish and once we get that one I think a lot more will come.  I’m so thankful that Duke and Rhonda Thorson let me race their trucks. God has blessed me with a fun group to work with.”

Coughlin will be back in action on Saturday, July 29 at Pocono Raceway (PA) for the Overton’s 150.