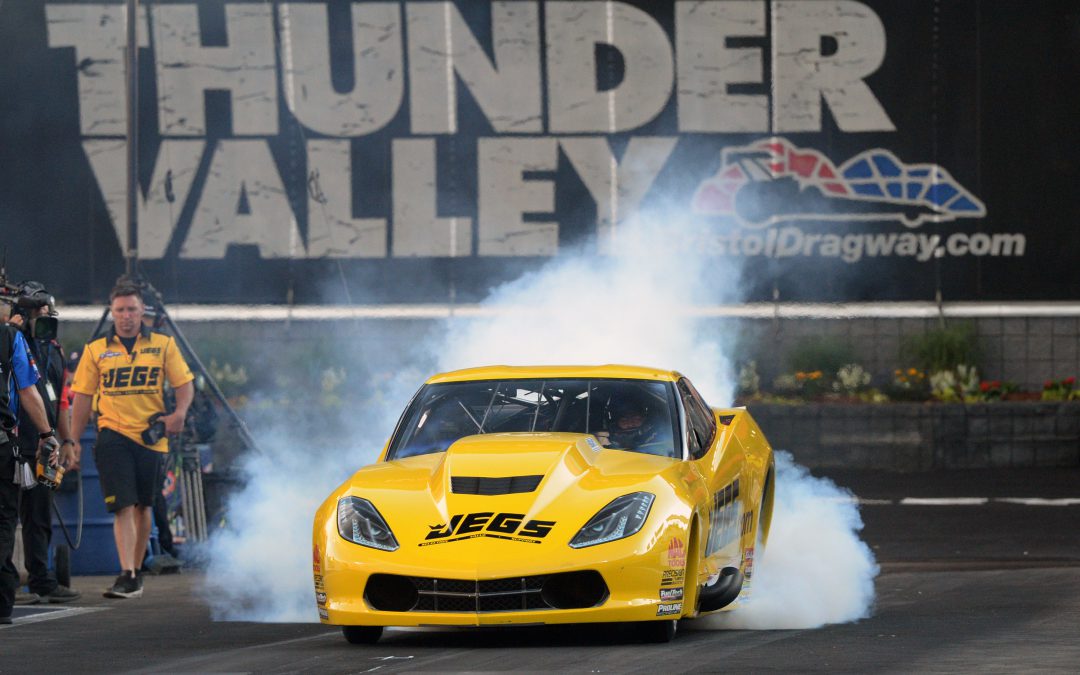 BRISTOL, Tenn. (June 16) — Troy Coughlin Jr. came to Bristol Dragway to compete in the J&A Service Pro Mod Drag Racing Series with just one goal in mind — take his twin-turbo JEGS.com Chevrolet Corvette C7 one round further than he did a few days ago in Englishtown, N.J., where he finished runner-up to longtime rival "Tricky Rickie" Smith.

Through two of three scheduled rounds of qualifying at the 17th annual NHRA Thunder Valley Nationals, Coughlin is right on track to accomplish his goal after qualifying atop the popular class with a scorching 5.854 at 254.33 mph.

"We've had a pretty awesome start to the Thunder Valley Nationals," Coughlin said. "It's true, Englishtown was a pretty good race for us. We were No.1 qualifier there and had a runner-up finish, so the car was in great shape. Steve (Petty, crew chief) and the guys pretty much just kept things like they were. They just had to tune it to the Bristol air because there's a little elevation to deal with up here on the mountain.

"We came in here and we were No. 2 in the first session and No. 1 in the second session so there's not much more we could have done. We are making good runs and all of the guys on the JEGS.com team couldn’t be more excited."

Both of Coughlin's Friday runs were picture perfect, as he drove straight down the racing groove of the historic quarter-mile. His first hit was a little slower, mainly due to increased track temperatures, but his competitive opening pass of 5.883 at 253.66 mph proved they were ready to race.

"It wasn't as easy as it may have looked," Coughlin said. "The track conditions changed quite a bit between sessions. It got a lot better as the sun started to set. We were trying to tune it up for the track and we were actually a little light on the tune-up in Q2 so hopefully there are another couple more numbers there. The NHRA does such a good job of prepping the track and giving all of us a great race surface."

Coughlin shared Friday night honors with his brother Jeg Coughlin Jr., who led Pro Stock with a 6.694 at 204.85 mph.

"That's pretty awesome," Coughlin said. "I’ve got my brother here racing with me and we're both doing great. I’ve got my son here racing in Top Fuel. Dad (Jeg Coughlin Sr.) might end up here on Sunday. I’m not entirely sure because he’s on his way back from Ireland, but It would be pretty cool to get us all here on Father’s Day if we can pull it off.

"I'm looking forward to tomorrow. The weather is supposed to be pretty similar to today. Hopefully we can maintain our No. 1 qualifier. It’s great for points. Then we need to focus on going rounds, getting to the semis and the finals, and then going for the win. That’s the goal."

The Pro Mod class will finish qualifying with a third and final session at 12:15 p.m., Saturday. The first round of eliminations began at 2:45 p.m., Saturday, and continue with the second round at 1:15 p.m., Sunday. (All times are local and subject to change.)