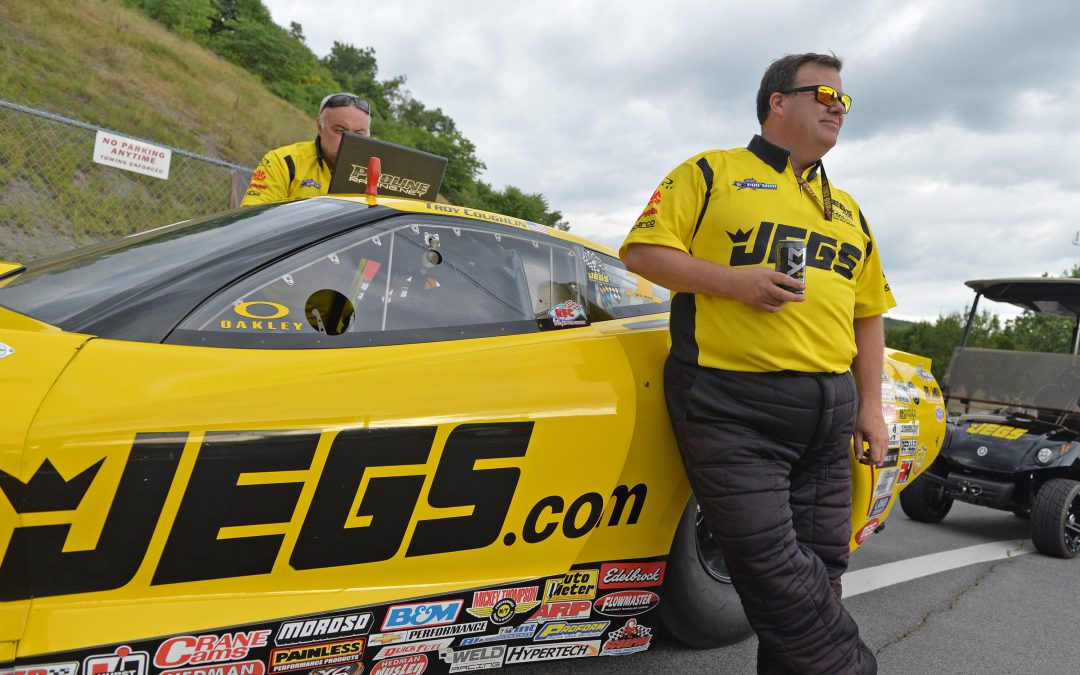 BRISTOL, Tenn. (June 18) – A week ago, JEGS.com Pro Mod driver Troy Coughlin Sr. had some good fortune in the first round – before winning the next day in Englishtown, N.J.

At the NHRA Thunder Valley Nationals on Saturday at Bristol Dragway, Coughlin again had some good fortune in the first round. Can history repeat itself?

"I hope so," Coughlin said. "We're shooting for that, for sure. We've got a lot of good things going. The car's running great, so we'll stick it back in line tomorrow, and we should be on a little bit better race track. Looking forward to it, for sure."

Last week in Englishtown, Coughlin survived a first-round battle with Mike Janis after the JEGS.com Corvette veered out of the groove. But Coughlin kept the car off the wall and won the round. He then dominated the next day to win the J&A Service Pro Mod Series race.

In Bristol, Coughlin's car spun the tires at the hit but was able to hook up and catch Gerry Capano.

"The car spun the tires on the starting line, which it hasn't done all weekend," Coughlin said. "So, yeah, we got a bit of a break there when Gerry Capano's car must've hurt an engine about 1,000-foot mark because I could see the smoke coming out of it.

"He was out in front of us, and we were definitely behind the 8-ball on that. But once the thing hooked up, the Proline power took over. He passed around him and got to the finish line first – barely."

The race will be decided on Father's Day, and Coughlin will have son Troy Jr. and daughter Meghan with him in Bristol. Daughters Paige and Kelly could not make the trip.

"It is pretty cool to have T.J. and Meghan here," Coughlin said. "One of these days, I'll get the whole family here. But everybody's got different schedules and going in different directions. They're racing and doing stuff with family, so that's important."