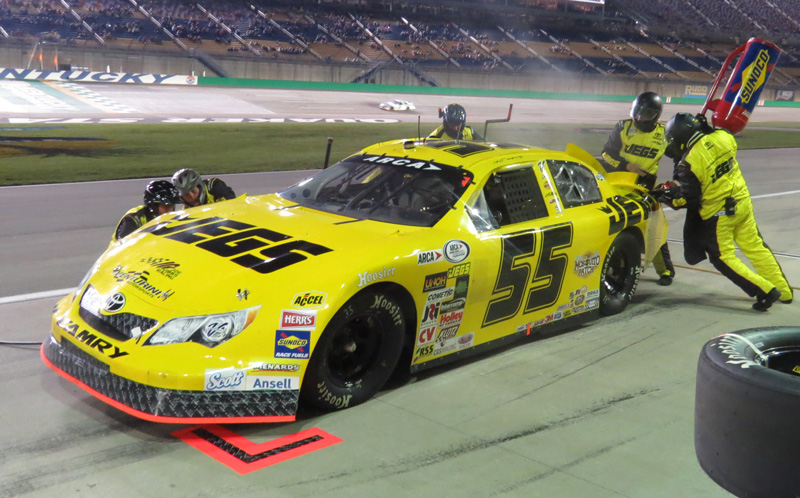 Cody Coughlin will head to Kansas Speedway in Kansas City, Kansas this Friday for the ARCA Racing Series season finale with high expectations.

This will be his 11th start and already has two top-five and seven top-10 finishes driving the Venturini Motorsports prepared no. 55 JEGS Toyota Camry.  The Joe Gibbs Racing Development driver finished fourth in his most recent ARCA event at Kentucky Speedway.  Also, earlier this month, Coughlin participated in an open ARCA Racing Series test session and was the fastest car during the test.

All of those factors give Coughlin lots of momentum heading into his final ARCA event of 2014.

“I’m excited to get back to Kansas," said Coughlin.  "We had a real good test there and felt like we have a good baseline to go off of when we go back on Friday.  My goal would be to win, but I at least want to better my best finish and I think we can accomplish this.”

In his first season of competition in the ARCA Racing Series, Coughlin has gone through a learning process of driving a heavier stock car, but he has adapted well and has become a consistent front-runner in his select ARCA starts.

“I think I’m getting better and more comfortable in racing in general,” Coughlin explained.  “I think, overall, our ARCA team is starting to really gel so I think the more we work together, the better we will get.  It has really shown in the last few races.”

Part of the team building success has come with his crew chief Dave Leiner, who is working well with Coughlin since joining the team at its midway point, as well as Team JEGS General Manager Kevin Hamlin and Coughlin's spotter Scott Wimmer.

“(Leiner) just keeps a really calm attitude and that’s something I have been trying to get better since I started,” Coughlin said.  “He has helped me a lot in that aspect as well as others, and it has turned into positive results on the track.”

Along with the Venturini Motorsports crew and the Team JEGS personnel, Cody will also have the support of his parents, John and Di as well as his sister, Kennedi, at the season finale on Friday night.

“My family continues to give me great support at and away from the track.  I cannot thank them enough for what they do to help realize my goals in racing,” Coughlin said.  “This year we made a big step up to the ARCA Racing Series and their support is also part of the success.

“God continues to show his blessings over everything I have done.  He has surrounded me with great support and talented individuals to make our first season a success.  I cannot thank him enough for this great path he has led me on so far.”

The ARCA 98.9 will air live on FOX Sports 2 at 7:30pm Central on Friday night.  To find FOX Sports 2 in your area, please visit www.foxsports.com.