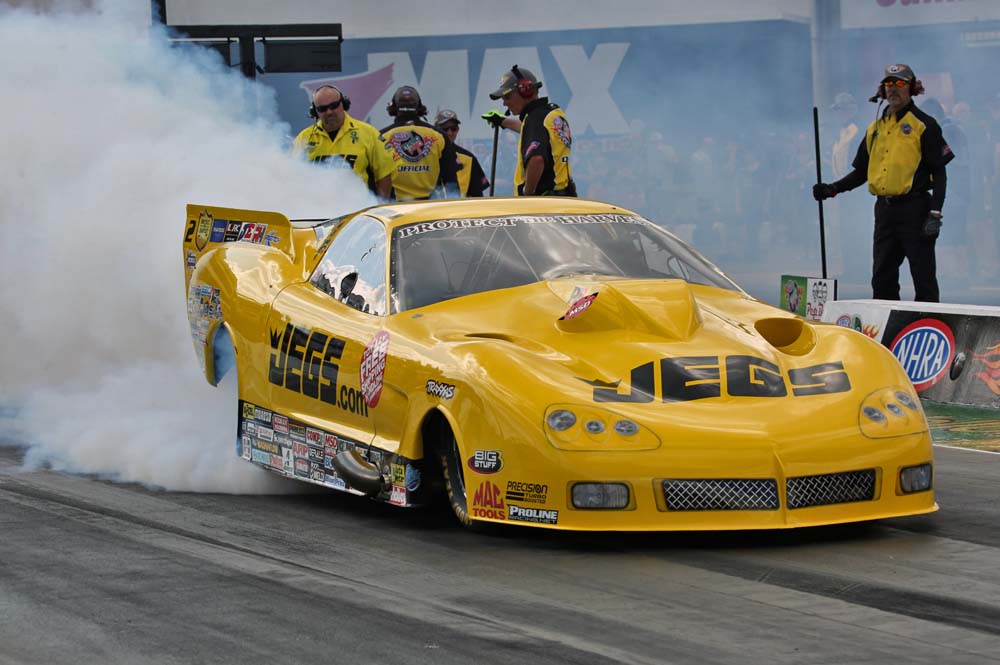 CHARLOTTE (Sept. 13) – JEGS.com Chevrolet Corvette driver Troy Coughlin carries a lot of confidence heading into the second round of eliminations of the Powerrocks Pro Mod race at the NHRA Carolina Nationals on Sunday at zMax Dragway.

"They're all good rounds to win, but that was a good one to win because of the points," Coughlin said. "We need to keep carrying that momentum on. We'll look at (the points) tomorrow night, hopefully when we're standing in the checkers enjoying the Wally."

Points leader Rickie Smith lost in the first round, as did No. 3 Pete Farber and No. 9 Fiscus. Plus, sixth-place Mike Castellana wasn't quick enough to make the race.

Coughlin was seventh in the standings coming into Charlotte and could move well up into the top five.

But Coughlin knows he has work to do, though he's confident in his team led by crew chief Steve Petty. After a bit of a slow start to the weekend, Coughlin snared the No. 11 qualifying spot with a pass of 5.986 seconds at 246.89 mph.

"The guys worked pretty hard all weekend here," Coughlin said. "We've been making adjustments to it from the last race, trying to better it. It showed a little bit of promise, but not enough for the track conditions that we were in.

"We kinda went back to where we were at in Indy for the first round of competition (Saturday). Steve said, 'This should work out pretty good. You should run about a .94, .95.'"

"We've got our hot rod back that we had at Indy," Coughlin said. "Steve has done a phenomenal job of orchestrating this thing, and Eric Dillard and those guys at Pro Line did great job turning the engine around after the little issue we had at Indy. That's put us right back in the ballgame."