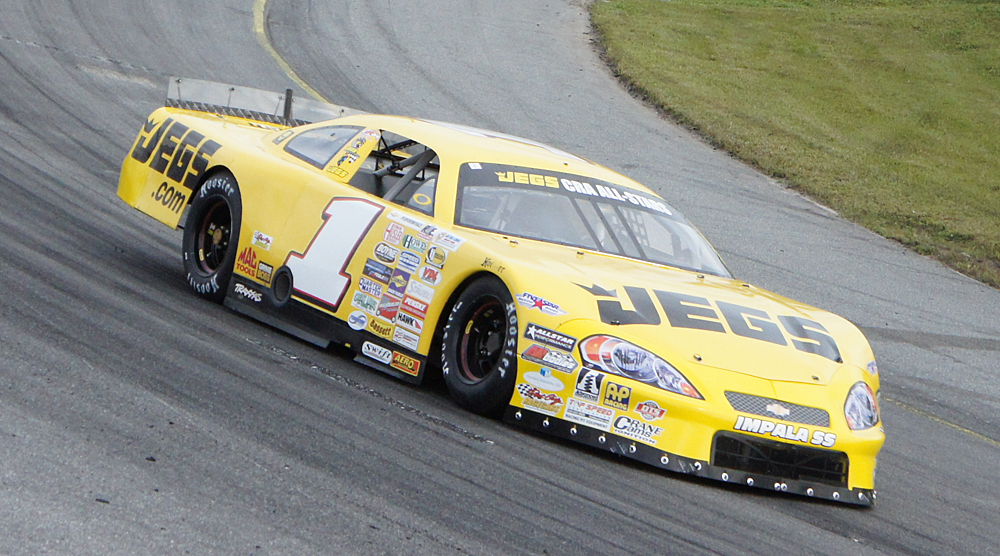 Cody Coughlin bookended Friday night’s Pro Late Model 100 at Florida’s New Smyrna Speedway with highlights like setting fast time in qualifying and securing a top-five finish at the end of the 100-lap affair.

In between, Coughlin’s night at New Smyrna was filled with a rollercoaster of emotion.  Still, Coughlin and his JEGS.com Chevy team kept their heads up and rolled out of the half-mile on the East Coast of Florida with a fifth-place finish amongst a field of talented Pro Late Model drivers.

“It was a solid effort for the JEGS.com Chevy tonight,” said Coughlin after climbing from his No. 1 machine at New Smyrna.  “It’s disappointing that we weren’t able to come away with the win that I think we were in position for, but to set fast time and have a good momentum-building run headed into the Snowball Derby weekend in a few weeks.  This is a good night overall.”

After setting fast time in qualifying, Coughlin started third due to a post-time trial invert.  He bided his time at the front of the field from the drop of the green flag and competed inside the top-five the entire race.

Coughlin showed the patience of a veteran by saving the tires on his JEGS No. 1 for a late-race charge to the lead.  Just as he started to make his move inside of 20 laps remaining, contact with another competitor caused Coughlin to lose spots..

“I honestly believe we would’ve won if it wasn’t for that incident,” added Coughlin.  “We were catching the leaders; we were saving our stuff all night and we were right there with them with 15 or so laps to go.  On the restart I drove down into the corner and almost had him cleared.  I gave him room, but he came down and I was completely sideways down the front straight away.  I had to slow up, but with a crate (engine) car, momentum is everything.  When you pretty much stop, it’s hard to get your momentum back up.”

Coughlin rallied back after that contact and again climbed back into the top five with less than 10 laps to go.  Then, another unlucky break occurred when Coughlin’s JEGS machine was spun out in turn three after contact from another competitor.

Once again, Coughlin used the motivation from the experienced racers on his JEGS team as he charged up in the closing laps to a top-five finish at the checkered flag.

“We got shuffled back, but we didn’t give up.  I’m not usually one to complain about the way people race me, but it was a real shame to have things go the way they did tonight.

“Even though the race didn’t go the way we would’ve liked, I’m very proud of the hard work by this whole JEGS.com team.  Kevin (Hamlin, team manager), Bubba (Pollard, crew chief and driver coach) and Scott (Wimmer, spotter) work well together and I work well with them.  It’s a neat deal that we have going on here.  It’s just one of those years where it doesn’t matter what you do, the luck just hasn’t been there.  We are blessed to have this opportunity, thank the Lord, and I’m fortunate to have my family with me.  We’ll just keep working hard.”

“We’re looking forward to the Snowflake 100,” added Coughlin.  “It’s the biggest race for the Pro Late Models.  I think we’ll have a really good car down there.  We have to get our stuff all together, but I think we made some really big gains this weekend.  That’s one thing I can take away from this race.  I learned a lot from Bubba and the rest of the team this weekend and I think we’ll only build on what we have going on now.