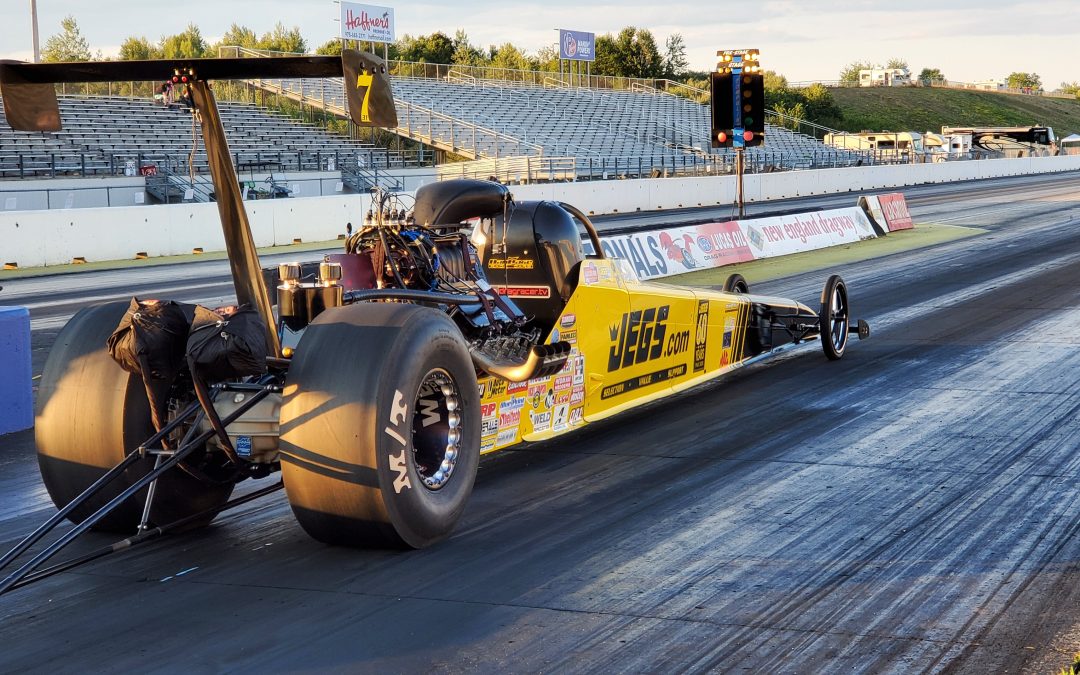 EPPING, N.H. (August 22) – After a fast and furious day of qualifying, the final fields are set for the JEGS SPORTSnationals at historic New England Dragway. The event marks the first time a JEGS SPORTSnationals race has been contested in the NHRA Northeast Division, and sportsman drag racers, nearly 400 strong, have packed the historic facility in a strong show of support.

Aragona, of Freehold, N.J., is the three-time and reigning NHRA Comp world champion. He drove his J/AA roadster to a 7.388-second run to claim the top spot over Ronald Proctor and Richard Schonberger. Aragona was a semifinal finisher in the Northeast Division Lucas Oil Series event held yesterday at New England Dragway.

Gove, of Dennysville, Maine, was the low qualifier for the Division 1 event on Thursday and repeated the feat on Saturday by driving his SS/AM Dodge Daytona to a 7.935-second run on his 9.00 index. Gove is the only driver in the 43-car Super Stock field to run more than a second under his index and leads Edward Schrader, Mark Nowicki, and Al Smyth, who occupy the next three spots in the field.

A total of 84 drivers made qualifying runs in Stock Eliminator, but none were quicker than Merryfield, of Andover, Mass., who took his Dodge Challenger Drag Pak to the top spot with a 10.348-second effort. Gove, the low qualifier in Super Stock, just missed the pole in Stock with his A/SA ’69 Camaro. Bob Moran and Gary Walters round out the quick four. Lucas Oil Series winner Lenny Williams will begin his quest for a second title from the No. 6 qualifying spot.

Lubniewski, of Holbrook, N.Y., set a fast pace in qualifying for the Vortech Superchargers Top Sportsman category with a quick 6.246 run in his Chevy Cobalt. Lubniewski is more than two-tenths of a second quicker than No. 2 qualifier Jeff Brooks, who ran 6.492. Brooks is coming off a win during Friday’s Lucas Oil Series event. John Benoit, the winner of the JEGS SPORTSnationals event at National Trail Raceway, will look to sweep both events when he begins from the No. 3 qualifying spot.

Three-time division champ Coughlin, of Delaware, Ohio, made an impressive showing for the JEGS Mail Order team when he drove his familiar yellow and black dragster to the No. 2 qualifying spot in the Vortech Superchargers Top Dragster class. A runner-up at the recent JEGS SPORTSnationals in his native state of Ohio, Coughlin drove to a 6.109 to push current championship leader Anthony Bertozzi to the No. 2 spot. Coughlin and Bertozzi raced in the final of the Columbus event last month. Al Kenny and Scott Hall round out the quick four in Top Dragster.

The final elimination rounds for the JEGS SPORTSnationals will take place Sunday morning beginning at 9 a.m.