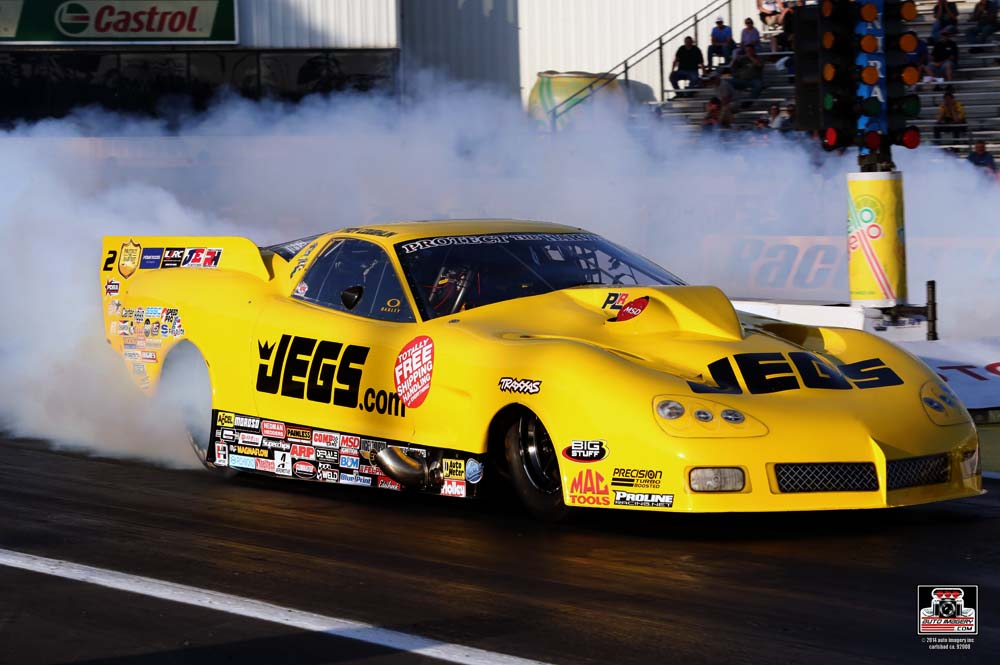 In the Pro Mod race presented by Powerocks, neither Coughlin nor Von Smith made a full pass, but Smith was able to coast across first to get the victory.

"It's kind of a shame," Coughlin said. "Both cars were kind of sliding around out there. NHRA does a good job with the track, so I'm sure the track was at a premium, compared to how the cars were getting down the track in the first round, but we have to deal with it."

Coughlin, the No. 12 qualifier, got the jump on No. 5 qualifier Smith with a stellar .016-second reaction time. The two cars were side-by-side until half-track, when his Corvette started sliding left.

"It ran fantastic numbers in the front half of the run," Coughlin said. "(Crew chief) Steve (Petty) put some power to it, and we got the car lined up and it was rolling along pretty good until it got just a skosh out of the groove. After that it started spinning that back tire and I thought, 'That's it.' "

"I was running alongside of him, which is a good sign for us, and you could feel the back end starting to rear up a little bit," Coughlin said. "I pulled the chutes, and then I heard his engine shut off. I hit the gas again, and there was all kinds of racket inside the car that I've never heard before, so I let back off the gas."

Powerocks, a manufacturer of portable charging mechanisms for mobile devices, has joined with several other companies to back the Real Pro Mod Association in support of NHRA Pro Mod. Redhorse Performance, JE Pistons, Pro Line Racing, Larry Jeffers Race Cars, and ProtectTheHarvest.com have brought added support to the Pro Mod class, and competition has increased accordingly with higher car counts.

The Pro Mod class struggled with the racetrack on Friday, and the first qualifying session was delayed as NHRA worked to get the track, especially the right lane, in better condition. After repairs, Coughlin said the track was fine, but the recalcitrant Pro Mod cars still had a hard time getting down.

"We had fantastic runs down the right lane," Coughlin said. "A lot of guys had good runs. The track was in good shape through qualifying. We just didn't have any luck, along a lot of the other Pro Mod guys who were getting loose from half-track on. Very uncharacteristic."

Coughlin, meanwhile, was impressed with his team's ability to continue improving his race car, despite the difficult first-round loss.

"We're gaining on it," Coughlin said. "That's all I can say. All the guys get an A for effort moving forward. We're still finding a couple of gremlins in this thing that we're fixing. We need to go make a couple test runs and make sure we've got all the bugs out of it. It's running fantastic."