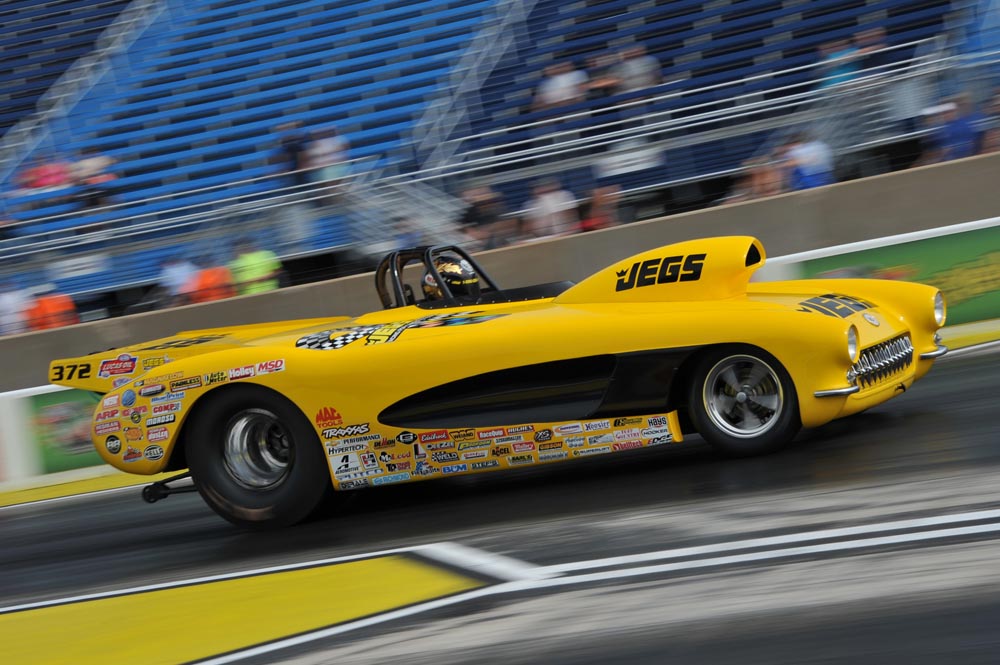 "It's a big weekend for our family and an even bigger weekend for JEGS Automotive and our 350-plus associates as we collectively host one of the most prestigious Sportsman races in the Lucas Oil Drag Racing Series," Jeg said. "I know we're all excited to get started and to welcome everyone to our home track for some great racing and camaraderie."

After racing three national events this summer in Pro Stock, a class where he's claimed five of his six world titles, Jeg returns to his Sportsman roots in Hebron, competing in Stock and Super Gas.

"I'm running the same two cars we had in Chicago," Jeg said. "The Mopar DragPak Challenger in Stock and the Corvette Roadster in Super Gas. Both cars were running extremely well at Route 66 so we expect to pick up where we left off.

"It's going to be a great weekend for all of us and I know I'm going to enjoy racing with Mikey, John, Clay and Paige. Maybe we can all share the winner's circle at the end of the race!"

Perhaps no one in the JEGS group wants to find the top step of the podium more than Mike, who enters the race fifth in D-3 points and 23rd in the national rankings.

"I've got two national and one divisional races left where I can claim points and I need to do well in all three to have a chance," Mike said. "We're still in the mix for the D-3 title and I'd be super happy to get into the top 10 nationally, especially with this being the first year we've raced for a national championship.

"Our 11-year-old son Clay also wants to win. He's been looking forward to this weekend for quite awhile. We both love racing at our home track and this weekend with so many Coughlins entered in the event, it'll be just like the old days. It's going to be a blast spending time with all of our friends and family, especially if we end the day in the winner's circle."

Although the vast majority of his time over the past few years has been spent directing son Cody's blossoming circle track career, John certainly should be recognized as a bona fide contender in the 10.90-second Super Street category. After all, the eldest of the four Coughlin boys is a four-time D-3 champion, having won titles in 2007 and 2009 in the Top Dragster class and 1994 and 1995 in Super Gas.

"Cody's season is winding down a bit so I'm going to try and race a few events this Fall in the JEGS.com Chevy S-10 I bought earlier this year," John said. "It's the same truck Jason Lynch used to own and he's won a bunch of races with it so it's a proven piece.

"We plan to make a few test runs before we get started and even though this is only the second race for me this year, I think we'll be in good shape. It's a fun truck that pulls a big ol' wheelie and it's competitive so we have a chance to go some rounds. Having said that, my main goal this weekend is to hang out with my brothers and all the kids and have a bunch of fun."

Paige, the second of Troy and Julie Coughlin's three daughters, also will be hoping for a big finish in Junior Dragster. Due to a scheduling conflict, her famous father Troy and older brother Troy Jr. will be racing Pro Mod in Charlotte, so her mother and sisters will serve as her closest support system.