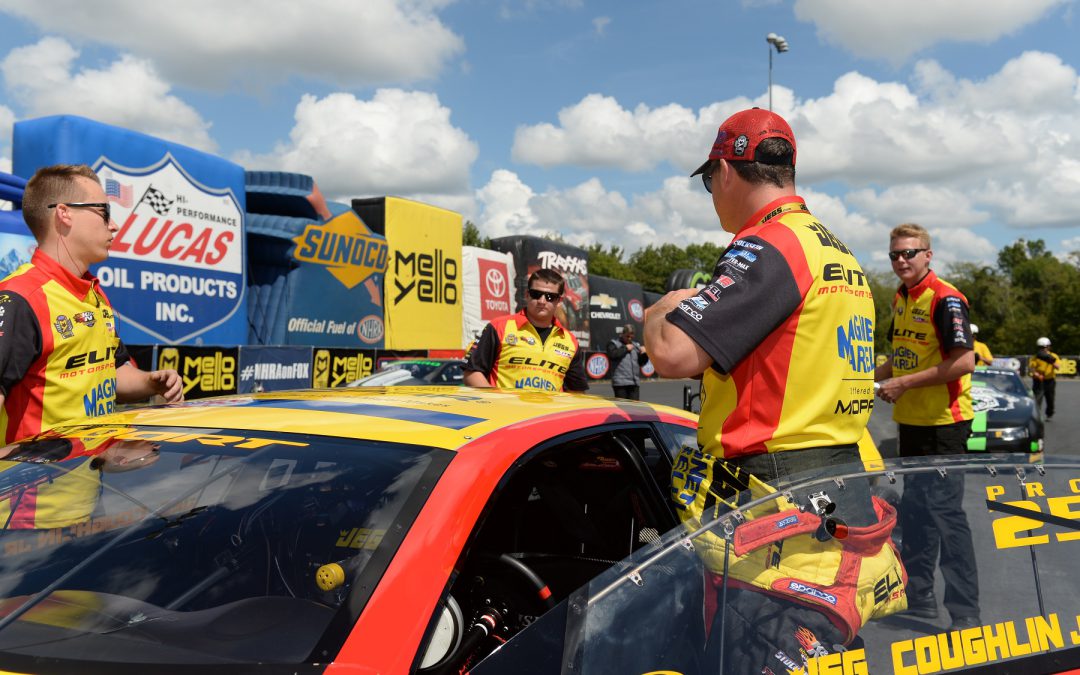 ST. LOUIS (Sept. 21) – One of the reasons JEGS.com ace Jeg Coughlin Jr. has had such a brilliant career is his ability to maintain his high level of performance under all circumstances.

Even when his race car was not at the top of the speed chart, Coughlin was able to focus and do his job.

That's been the case this season, as his Magneti Marelli offered by Mopar/JEGS.com Dodge Dart hasn't always been the fastest. But Coughlin hopes that he – and his Elite Motorsports team – can continue to perform as well as possible, including the AAA Insurance NHRA Midwest Nationals this weekend at Gateway Motorsports Park.

"We know what we've got under the hood, we know what we've got with the cars," Coughlin said. "We need to get out and just continually try to not reinvent the wheel. We need to make good, solid runs; give the tuning group on the engine side an opportunity to clean some things up and maybe clean some things up with the chassis side. That will allow me to get behind the wheel and do what I do."

Coughlin is a five-time Pro Stock champion who has 58 victories in his illustrious career, including two at St. Louis (in 2009 and 1998).

"I'm optimistic going in to the weekend," Coughlin said. "I think if we are on our best behavior we can be a top-eight car coming in to the field on Sunday. We've seen a lot of strange things happen this year, evidenced with my partner and teammate, Erica Enders, missing the cut in Charlotte.

"We won't take anything for granted. We'll prepare hard, we'll prepare smart and see if we can't get out and shake it up in St. Louis."

Coughlin sits ninth in the Pro Stock points standings after one race in the six-race Countdown to the Championship.

"St. Louis is a fun race to have in the Countdown," Coughlin said. "We get a good fan base out of the area there and love performing. We look to carry on the momentum that we did the week before in Charlotte in the first race to the Countdown."