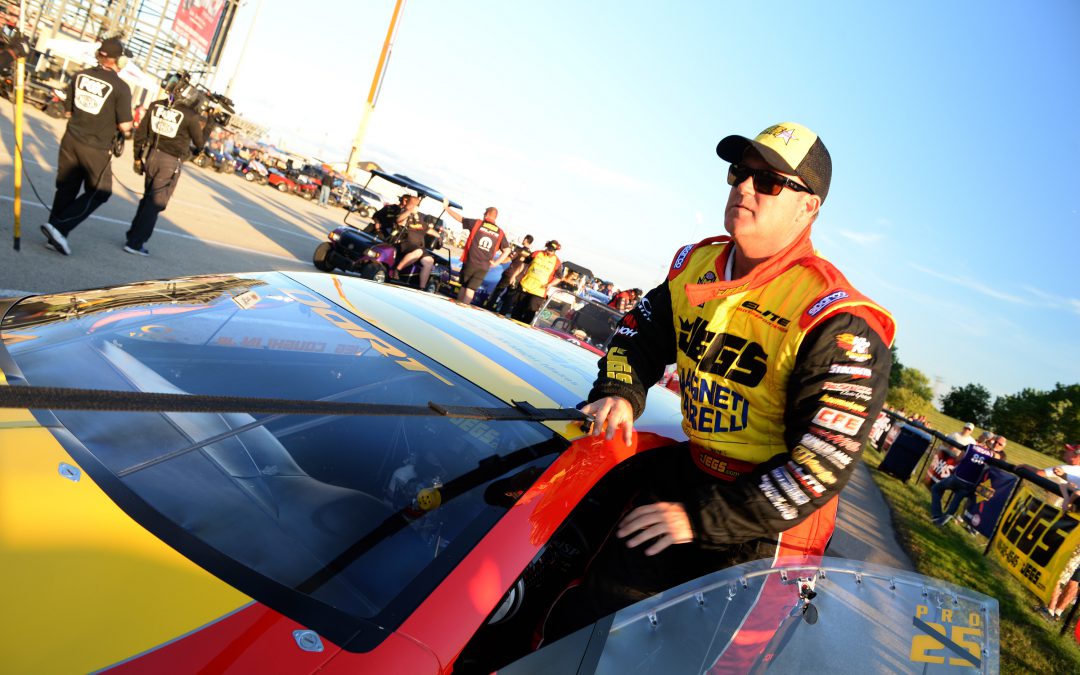 CHICAGO (July 9) — Progress can sometimes be painstakingly slow in the Pro Stock class, but Jeg Coughlin Jr. and his Elite Motorsports team are taking steps in the right direction.

Coughlin qualified his Magneti Marelli offered by Mopar/JEGS.com Dodge Dart in the No. 11 position for the K&N Filters Route 66 NHRA Nationals on Saturday at Route 66 Raceway, but the five-time Pro Stock champion knows the gap has been narrowed to the top teams in the class.

Coughlin's best qualifying pass was 6.637 seconds at 207.82 mph, though he was less than four-hundredths of a second from the No. 4 spot despite not making the most of that pass.

"The weekend on the track has been pretty good," Coughlin said. "We made a decent run Friday night in Q2 with a .63 and really did not make a great run. Like (team owner) Richard (Freeman) says, 'If frogs had wings, they wouldn't bump their butts when they hop,' but we probably should have run as low as a .60 or .61."

That would've easily put Coughlin in the top half of the field, but it still gives him momentum heading into eliminations on Sunday. He'll race No. 6 qualifier Drew Skillman in the first round, as Skillman made a top pass of 6.616 seconds at 209.07 mph.

"We know going into race day tomorrow we have a tough competitor in Drew Skillman," Coughlin said. "We had a wounded motor in that last run (in Q4) and still went a .64, which was pretty decent. Things are headed in the right direction."

"It didn't destroy itself, but the engine was not happy after four runs," Coughlin said. "That part is a little alarming, given all the work these guys have done the last couple of weeks. We'll keep our chin up."

Coughlin has already enjoyed a fun weekend in Chicago, as brother Mike and nephew Troy Jr. were racing in the NHRA Lucas Oil Drag Racing Series here. Plus, Coughlin had fun watching the best Sportsman racers in the country battle in the JEGS Allstars event.

"The JEGS Allstars event went off fantastic," Coughlin said. "We had a barbecue Friday night for all the competitors, families, and teams, and that's always an exciting way to kick the event off. We had beautiful weather today, and the track was amazing.

"We saw some great times with the Alcohol classes and some great runs in the other Lucas Oil Series classes. We're just really happy to see the event go off with such great success. Big thanks to NHRA, Scott Woodruff, and all the competitors for making it so special."