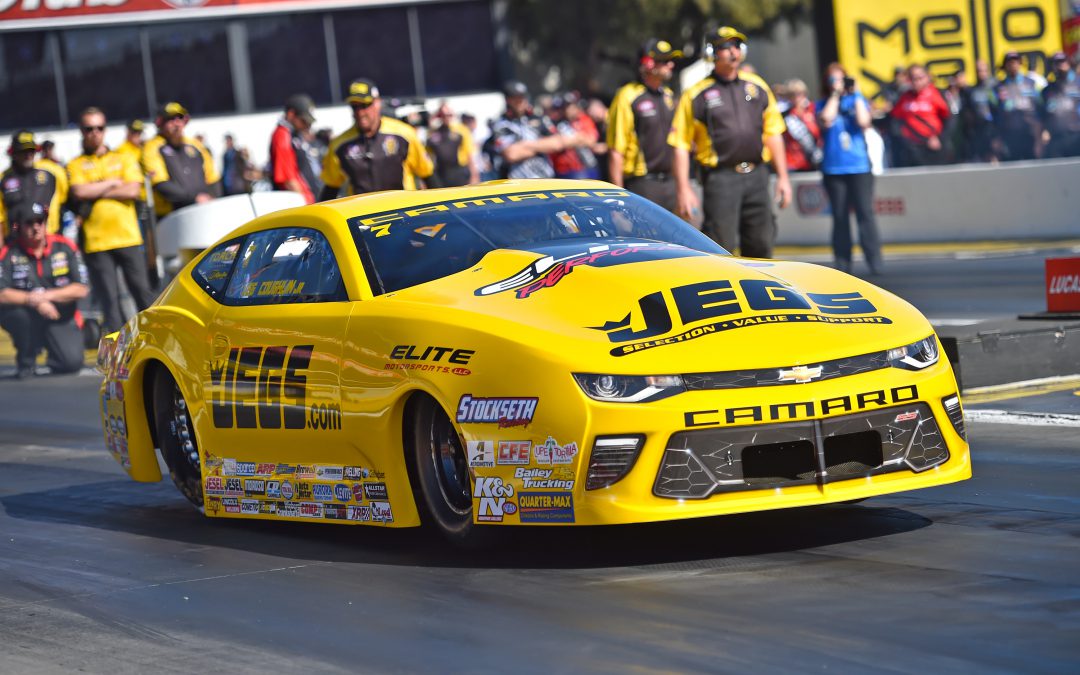 "We're definitely inside the window of performance between our two cars where it could very well come down to how well we execute in the cockpit," Coughlin said. "I expect we'll both be .020 or better on the tree (in reaction times) and then it'll come down to the car, the balance and the way we take them down the track to figure out who wins.

"For sure, one of us is going to Round 2. Obviously, we'd like for it to be us. We'll turn over every rock to try and figure out why we're outside the box we were in when we tested last week and try to get the car back to that level of performance or better."

Enders was slightly quicker in qualifying with a best pass of 6.577 at 209.14 mph in her Melling Performance/Elite Motorsports Chevrolet Camaro. Coughlin wasn't far behind in the JEGS.com/Elite Performance Chevrolet Camaro, topping out at 6.596 at 208.46 mph.

The results just about mirror what happened in preseason testing at Wild Horse Pass Motorsports Park in Phoenix, where Enders' hot rod was a tick quicker than Coughlin's ride.

"We tested pretty well in the offseason, both in Florida early on and more recently in Phoenix," Coughlin said. "I personally got behind the wheel for a dozen-plus runs in Phoenix and the JEGS.com car felt pretty decent. It was accelerating well every time. For some reason, when we got here, it just didn't have the same acceleration.

"We did improve on it there in Q4 but we were just a little too late to catch up to the frontrunners. The balance between the way the car is set-up and the clutch needs a little fine-tuning. Fortunately, we have another shot at it tomorrow morning in Round 1 against Erica, and as I told (crew chief) Rickie Jones, good Lord willing, we'll have more than one shot to fine-tune it even more."

With Elite Motorsports fielding four cars, it's inevitable team members will face each other in the elimination rounds. Of course, Coughlin and Enders would have liked any head-to-head battles to occur later in the day, but they only had to battle twice last year so they hope this won't happen many more times. For the record, they spilt their two meetings in 2017.

"It's wide open, really," Coughlin said. "If you look at our other two teammates, Vincent (Nobile) is on the pole and Alex (Laughlin) is fifth, so that shows we've got the horsepower with these Elite Performance motors. It's really a pretty simple situation — we just need to find the courage to give the car what it wants and make a big run that lays the board over in Round 1."

Pro Stock eliminations begin at noon, Sunday. Live eliminations will air on FOX Sports 1 from 2-5 p.m., Sunday. (All times are local and subject to change.)