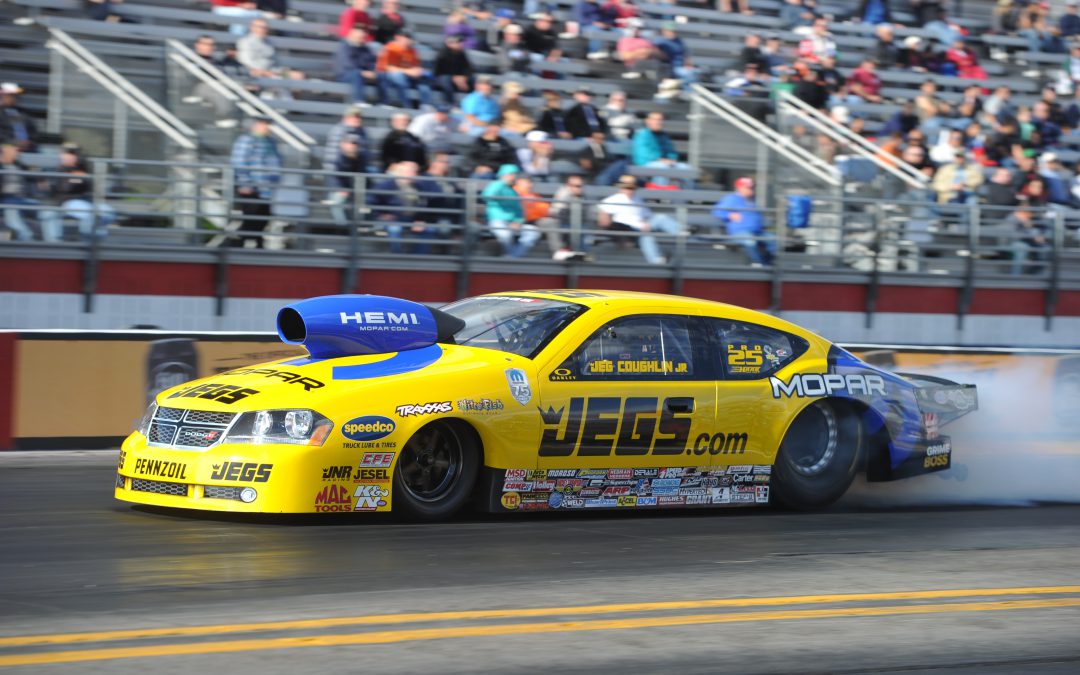 POMONA, Calif. (Nov. 11) — Five-time world champion Jr. has never finished a full season of drag racing outside the top 10 and 2012 will be no exception, with the JEGS.com/Mopar Dodge Avenger team earning the ninth slot in the final standings after Sunday's quiet first-round exit from the NHRA Finals.

The ranking is the lowest of Coughlin's illustrious career, excepting the two part-time campaigns he had in 1997 and 2006, although it was certainly one of the gutsier efforts the 68-time national event winner has ever put together. Just making the Countdown to One field in their first-year as a brand-new team was impressive, and kept Coughlin and crew perfect in the NHRA's playoff era.

"It was an accomplishment to make the Countdown in our first year," Coughlin said. "The guys worked exceptionally hard and I'm proud of them. But at the same time I don't think anyone in this pit is happy with our overall finish. We expected a lot more from this program, especially in the area of performance, and we just didn't get it done.

"We have a lot of work to do to prepare for 2013. This season has ended so to me that merely signals the start of all the things we need to do in the next two and a half months to return here to for the Winternationals with a better race team, from top to bottom."

Coughlin started Sunday's first-round race against Vincent Nobile as the lower seed, relinquishing him to the less-than-desirable right-hand lane. He still pulled out a stellar .017-second reaction time to try and gain an early edge. But Nobile took a stab at the Tree and recorded a perfect .000-second launch to effectively end the race before it started, running away for a 6.589 to 6.625 second victory.

"Vincent's always tough," Coughlin said. "Going out as the first pair after the nitro cars is always tough and not having lane choice didn't help but we still gave it a go. I felt like I had a good light, and it turned out I did, but he still got the jump on me. He got in a little trouble and got over by the centerline but he held it together. It was close; I could see him right next to me all the way down the track."