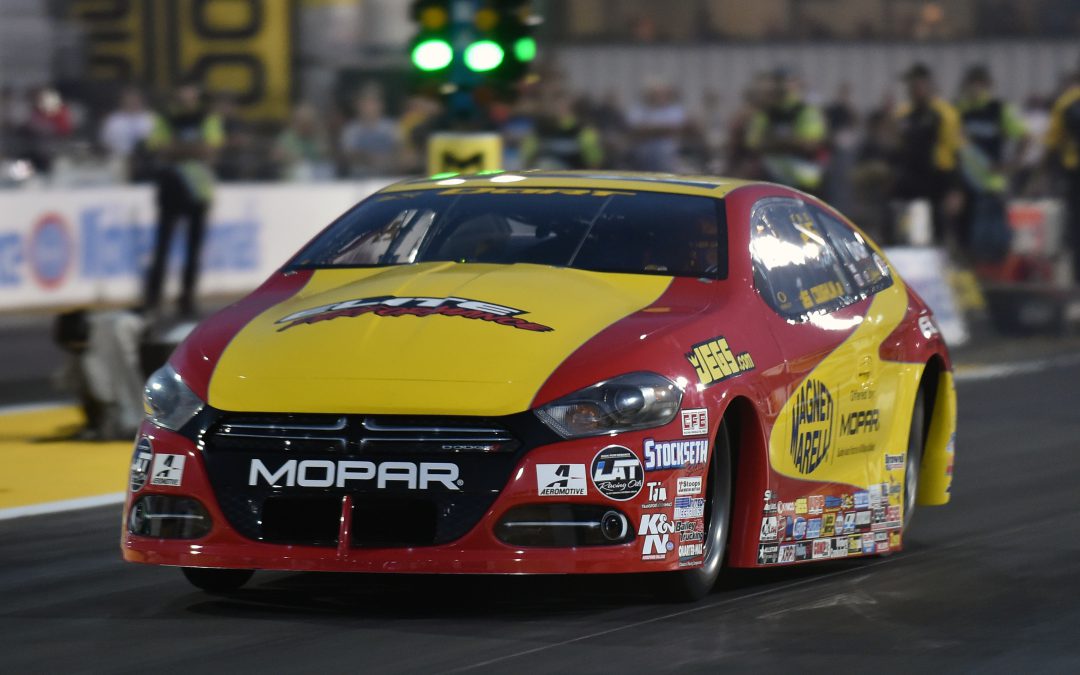 ST. LOUIS (Sept. 24) – Progress in the NHRA Pro Stock class can be painstakingly slow, so when it is made, it is relished.

Five-time Pro Stock champion Jeg Coughlin Jr. is relishing the progress made by his Magneti Marelli offered by Mopar/JEGS.com Dodge Dart team. He qualified No. 10 for the NHRA AAA Midwest Nationals on Saturday at Gateway Motorsports Park as his Elite Motorsports team continued to make gains with its Mopar program.

"We've been building a little bit of momentum quietly with our Magneti Marelli Dodge and it feels good to make a little bit of an impact," Coughlin said. "(Friday) night, we were probably as close as we have been in a while to the No. 1 car when we ran the .64."

Coughlin's best pass for the weekend came Friday night when he made a run of 6.648 seconds at 207.46 mph. That was four-hundredths off the top car for the session.

"We put a second motor in today for Q4," Coughlin said. "We didn't think there was anything wrong with the first one, but there were some symptoms of it maybe slowing a little bit. We put a new one in there and actually picked up a little bit. "

"The run itself was very aggressive," Coughlin said. "We've been on the other side of that all weekend, kinda moseying on through there. I don't think we are going to sneak up and scare anyone tomorrow, but they'll have to be on their best behavior. I know we can pick up a tick more and I feel great behind the wheel."

Coughlin will square off against No. 7 qualifier Chris McGaha in the first round of eliminations. McGaha's best pass was 6.621 seconds at 209.07 mph.

Right before Q4 in Pro Stock, Coughlin was able to watch older brother Troy Coughlin Sr. take out No. 2 qualifier Bob Rahaim in the first round of Pro Mod.

"It was great to see Troy take out No. 2 in the points in the Pro Modified class first round in kind of a do-or-die race for him. Rickie Smith advanced, too. I certainly don't root against anyone but for Troy's championship hopes, we would have needed (Smith) to kinda fall by the wayside but you never know what can happen.

"That team's been so strong the last four years, Troy's team and Rickie's both. I think they have been 1-2 in the points the last four years  and it looks like potentially they will be 1-2 again this year. We'll just see if we can't keep that No. 1 on old yellow."