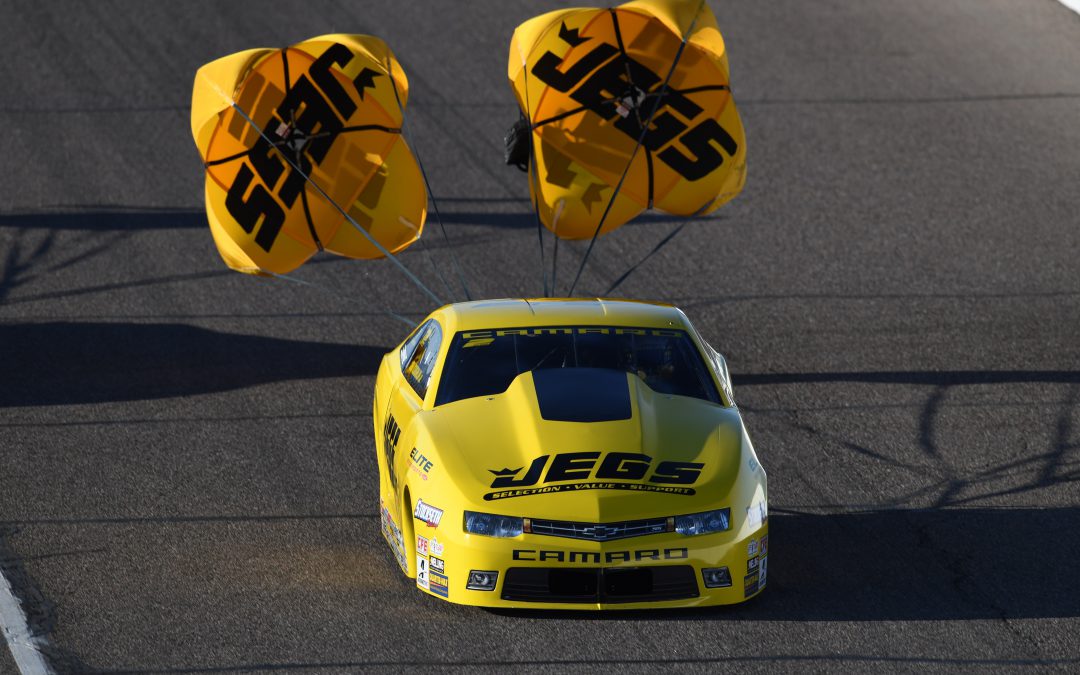 LAS VEGAS (April 3) — Whenever Jeg Coughlin Jr. isn't driving his sleek JEGS.com Elite Motorsports Chevrolet Camaro down The Strip at Las Vegas Motor Speedway there's a great chance he will be found in the grandstands watching his peers race in this weekend's 20th annual Denso Spark Plugs Four-Wide Nationals. That's how big a fan the 62-time national event winner is of four-wide racing.

"Whenever we go up there to check the track out before a run, I'm always awed by the spectacle of four-wide racing," Coughlin said. "There's so much to see, so much going on across four lanes of racing, it just kind of captures you. Our friends at FOX do a great job of showcasing it all on TV but it's always better to be there.

"In the racecar, you have a different staging process and have a few extra things on your mind with the four-wide format but you're mostly occupied with doing your job. When you get a chance to just watch, it fills all your senses for sure. This is definitely one of those races the fans will enjoy. I certainly plan to spend some time in the stands."

Already a winner this year after taking the trophy home from the Magic Dry Nationals in Phoenix, Coughlin is hoping to push his win total at this track to six. An eight-time finalist at the facility, Coughlin won the spring race here in 2000, 2001 and 2009 — all before the four-wide format came into play. He also won the fall Vegas race in 2002 and 2008. On three other occasions, Coughlin finished as the runner-up.

"This track's always in great shape and at this point there's been enough racing in the two newer lanes that all four should be good to go," Coughlin said. "I can't think of many people, racers and fans alike, that don't enjoy a weekend in Vegas. It's an exciting town, for sure.

"We changed to a new Rick Jones Racecars-built Camaro before Gainesville and it's such a great car. We made a bunch of progress with it in Florida and some additional testing we've had the chance to execute. Plus, our teammate Erica Enders started the year in her new RJ car, which is a clone of this one, so we have a fair amount of data to tune from. Hopefully this will be our best race of the year."

Aside from Enders, Coughlin and crew chief Rickie Jones also benefit from the data gathered by fellow Elite Motorsports drivers Alex Laughlin and Rodger Brogdon, as well as the tuning ideas of team crew chiefs Rick Jones, Mark Ingersoll and Brian "Lump" Self.

"We have a championship group top to bottom," Coughlin said. "All of the cars are doing well and I don't see that changing at all. I was the lucky one to get the win in Phoenix but the reality is that any one of us can win at any time. It's up to us to maximize our chances and minimize our mistakes."

Last fall, Coughlin was top qualifier at this track.