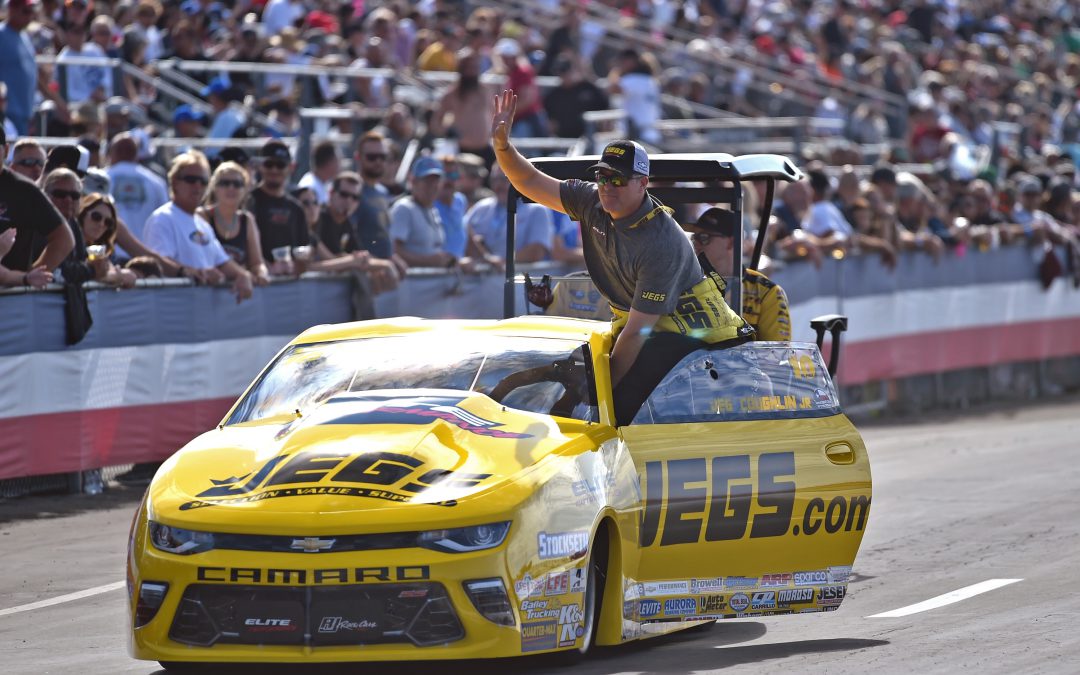 POMONA, Calif. (Nov. 12) — Jeg Coughlin Jr. had his hands full Sunday, both in beating first-round opponent Matt Hartford and again in a quarterfinal defeat to Bo Butner as his JEGS.com/Elite Performance Chevrolet Camaro seemed a bit unhappy all day. In the end, Coughlin said it's time to put this race and season in the rear-view mirror and look at the big picture, and what the team needs to do to be title contenders in 2018.

"We've got horsepower, we've got cars and we've got the best people in the sport, we're just getting out-raced right now," Coughlin said. "And it stings to say that. It's certainly not anything against these guys. I'd go to battle with them any day and I'm looking forward to another year together in '18, but we need to get our race days back in order.

"The main thing is consistency and I know we'll find it. We'll have a busy off-season getting everything back to the way this team was in Erica's (Enders, teammate) two championship years (in 2014-15) and I fully expect us to contend for the title with all the Elite cars next year."

He was sharp at the starting line once again when he took on Butner, with his .018-second light giving him a sizable .049-second headstart. But when Coughlin's hot rod drifted out of the groove and started spinning its tires, Butner had the power to drive by and take the win with a 6.567 at 210.08 mph to Coughlin's 6.630 at 209.59 mph.

"The day just didn't turn out the way we were hoping it would," Coughlin said. "We came in with a very competitive racecar but for some reason the car wanted to go to the right in both sessions. I was fighting it the whole way and doing all I could to get it back in the groove. I even think we were up on three wheels at one point.

"We got away with it on a little holeshot against Matt, a car we thought we should have had a performance advantage over, but against Bo all that driving around cost us too much ET and we lost.

"The year is done, we're excited to go to the banquet tomorrow night in Hollywood and celebrate all the champions. I wish everyone a great Thanksgiving, a wonderful Christmas and New Years with their families, and then we'll get back at it and try to win our seventh championship in 2018."