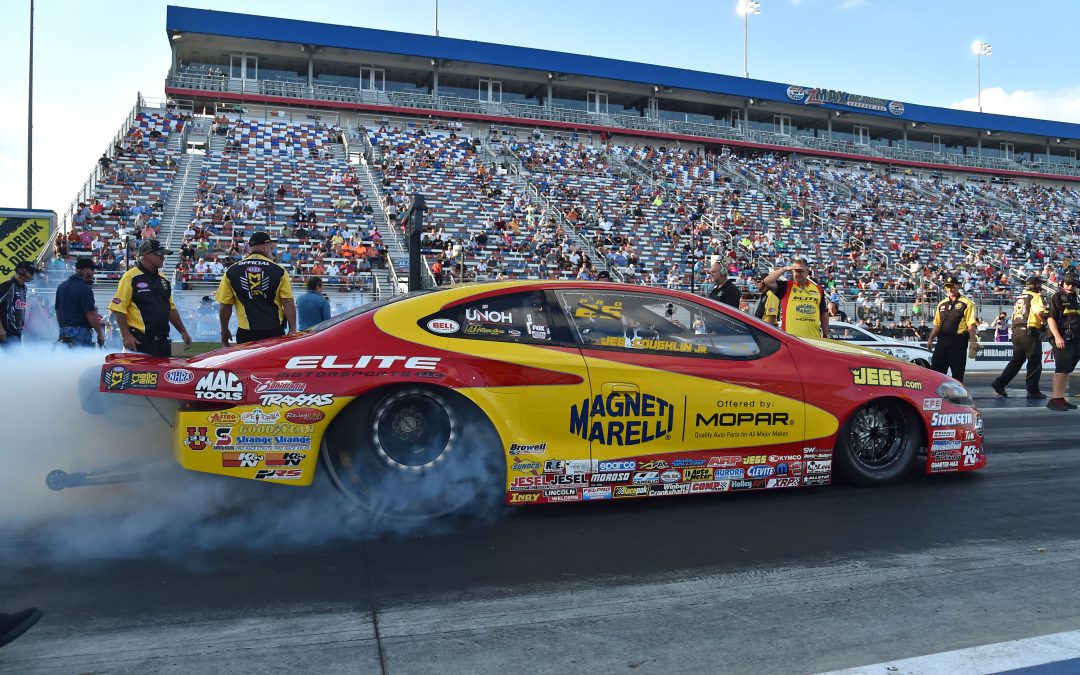 CHARLOTTE (Sept. 17) — Five-time Pro Stock champion Jeg Coughlin Jr. was the first drag racer to ever run down zMax Dragway, breaking in the facility with a long smoky burnout for the benefit of the local and national media back in 2008. Sunday he hopes to be the last one standing at the beautiful track, collecting the winner's trophy of the ninth annual NHRA Carolina Nationals.

"We'd certainly love to win this race," Coughlin said. "This is the first round of six in the Countdown to the Championship and we're going into race day probably as good as we’ve been most of the year in relation to the rest of the field. We’ll get out there and see if we can’t race hard and turn on some win lights."

Coughlin, who qualified 11th with a 6.651 at 208.17 mph, isn't a stranger to Charlotte's winner's circle having won the fall event in 2013. But this year is different as he is now a part of Elite Motorsports as driver of the Magneti Marelli offered by Mopar/JEGS.com Dodge Dart.

"We made three decent runs in qualifying," Coughlin said. "That last one, the car felt real rigid and I don’t know why. We felt like we could have run another 6.65 there, which would have made it four 6.65s in qualifying. That would have been some damn consistent running, but with the heat coming in we didn’t make a very good run there. We’ll analyze that and see if we can’t get ready for game day tomorrow."

The start of the six-race Countdown to the Championship playoffs signifies a fresh start for Coughlin, who entered the weekend just 110 points off the Mello Yello lead. In drag racing, each elimination round win is worth 20 points, and with six races and 24 rounds of action left in the season, Coughlin knows he has a chance to make a move.

"Without question, had we not been in a playoff format season we would have raced differently the first 18 races," Coughlin said. "It is a breath of fresh air but realistically we’ve got maybe a top-six car, at best, and we’ve really got to hustle just to show that.

"If we can be clever on race day, steal some from the start line, and out-race some folks, we can make a move. It’s going to be tough because obviously the Pro Stock contingent right now, the top 12 cars are all very, very tough. We’ll do our best to suck it up and be ready for action tomorrow."