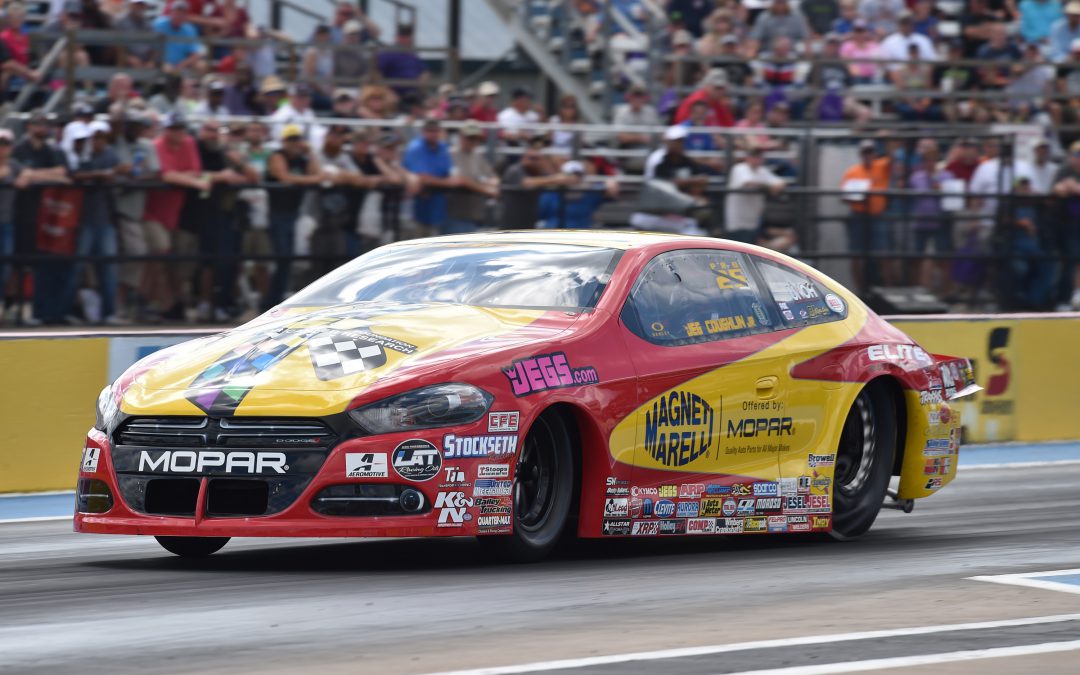 DALLAS (Oct. 15) — In two and a half decades of racing, Jeg Coughlin Jr. has accomplished a lot of remarkable things. He's won six world championships (five in Pro Stock and one more in Super Gas), claimed 76 national event trophies, raced to the winner's circle in a record seven different eliminator categories, and is the only driver ever to win from all 16 qualifying positions.

That final stat seems the most telling at the conclusion of qualifying for the 31st annual AAA Texas NHRA Fallnationals as Coughlin and crew have struggled a bit this weekend with their Magneti Marelli offered by Mopar/JEGS.com Dodge Dart, slotting 14th on the 16-car elimination grid with an official clocking of 6.686 at 205.47 mph.

"We have been trying different things, hoping to hit on something that will work for us," Coughlin said. "Our focus is clearly on next season at this point but having said that we're still not giving up on 2016. We have a chance to win three more races this year and that's exactly what we'll try to do.

"I'm excited about our future. I've played this game long enough to know there are ups and downs. The competition level is simply too good out here and as we've seen again this year. You cannot expect to win championships every year.

"The optimism I feel is because of this race team and the brain power and experience of the people on the crew, back at the shop and in the dyno room. We won't be down for long."

Coughlin actually ran a 6.658 at 207.11 mph on Friday but the run wasn't among the top 12 of the day so he had to start over Saturday when temperatures were much warmer.

"It was a good test because the weather tomorrow is supposed to be just like it was today so although the numbers weren't better, where we ran in relation to the conditions was a touch better so we have a chance," Coughlin said.

First up for Coughlin is No. 3 qualifier Alex Laughlin, a local favorite from nearby Granbury who ran a best pass of 6.609 at 209.10 mph.

"No one is easy, especially the drivers still fighting for the championship if we happen to run into any of them," Coughlin said. "I know very well what they're going through and we hope to be back in that fight next year. For now, we'll chase race wins."

Pro Stock eliminations start at noon, Sunday. FOX Sports 1 will broadcast all of the elimination action live from 2-5 p.m., Sunday. (All times listed in ET).