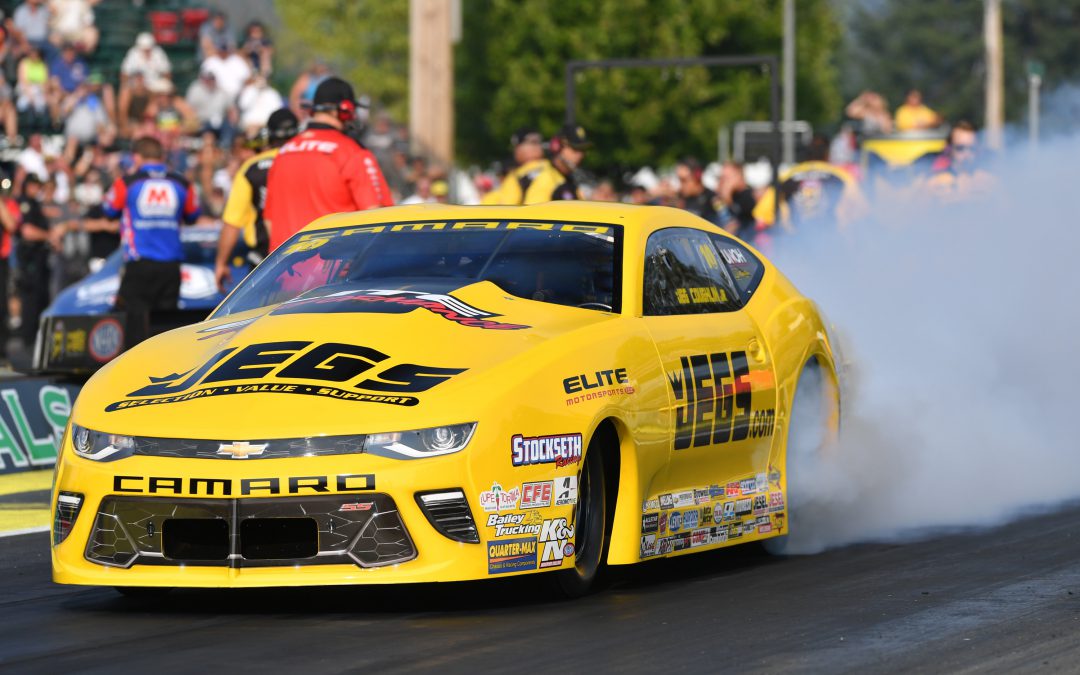 KENT, Wash. (Aug. 6) — Five-time Pro Stock world champion Jeg Coughlin Jr. didn't have the most successful Western Swing of his career, but the 58-time national event winner says the progress made in throughout the Elite Motorsports camp will most certainly bear fruit in the coming weeks.

"If you were to say I want to go Pro Stock racing and run for race wins and championships, this is the team you’d want around you," Coughlin said. "We have all the parts and pieces in place to win. We've just maybe been our own worst enemy to a certain extent.

"If you divide these first 16 races in half, the first part of it our JEGS.com/Elite Performance Chevrolet Camaro was extremely quick and competitive seemingly every weekend. Then we started trying to match up the other cars with what we were doing and went in a new direction with the set-up, something we definitely thought was going to work for all of us. In hindsight, it became a bit of a frenzy instead and we've been fighting it ever since."

The fight continued in Sunday's opening round when Coughlin fell to Chris McGaha. The part-time racer needed his best pass of the weekend, a 6.591 at 209.30 mph, to best Coughlin's 6.611 at 208.71 mph, but the result was the same, a first-round exit.

"At last weekend's race in Sonoma we started coming out of the funk we were in for five or six races there and although we didn't get the win against Chris today, we continued to make some gains here as well," Coughlin said. "We actually found some stuff with the suspension after our run today. It looks like it was binding up a little bit and possibly slowing us down. We'll verify what we found when we get back to the shop to make certain the problem has been corrected but it looks encouraging. I know we won’t stop working until we get these things running strong again."

Coughlin also gained some confidence by watching teammate Erica Enders race to the final round where she ultimately finished second by .0006 seconds in the closest Pro Stock race of the entire season.

"It definitely helps everyone on the team when one of us does well," said Coughlin, a runner-up in Houston and Topeka earlier this year. "It lifts all of our spirits and lets us know the things the guys are working on are starting to show some real promise. We share data throughout this four-car team so when one of us gets on to something like Erica did today, it's exciting.

"We're optimistic but we're still going to prove everything out and double check that what looks like it's working properly is actually reliable moving forward. We have to work smart as we get closer to the start of the playoffs and I think we're doing that."