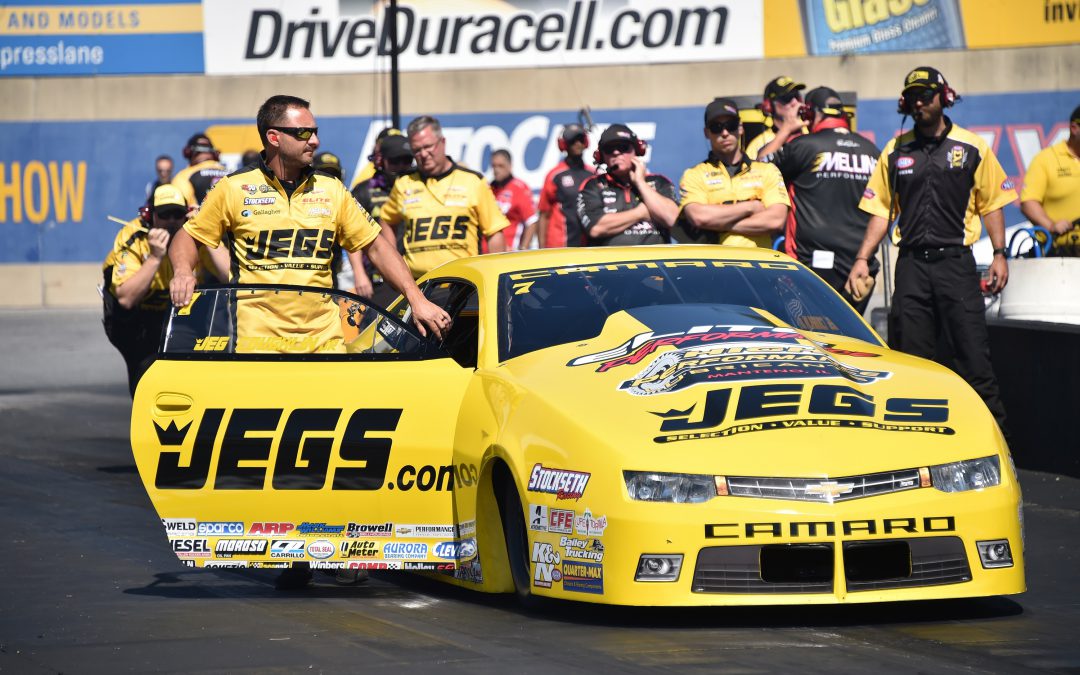 ST. LOUIS (Sept. 18) — Five-time Pro Stock champion Jeg Coughlin Jr. appears to be peaking at the right time as the NHRA tour prepares for this weekend's seventh annual AAA NHRA Midwest Nationals. Just one race into the Countdown to the Championship, Coughlin's JEGS.com Elite Performance Chevrolet Camaro is running at the top of the charts, as witnessed last weekend in Reading, Pa., where he qualified second overall.

"It's a very exciting time," Coughlin said. "We are heading to Round 2 of 6 in this year's playoffs and we have a great hot rod on our hands. We were very quick every single round in Reading, qualified second by just a fraction to my teammate Erica Enders, and definitely had a car that could have won the race.

"Pro Stock is a zero-tolerance world. The preparation during the week, the calls you make during the day, driving down the track — it all has to be perfect. There's no room for error because any one of the 10 cars in the Countdown are capable of winning, and even a few outside the top 10 have a chance to strike."

Although he was nipped by .007 seconds in the second round of Reading eliminations, Coughlin knows he has a great chance to add to his collection of five Gateway trophies. He previously won here in 2002 and 2009 in Pro Stock, 1997 and 2003 in Super Stock, and 2010 in Top Dragster.

"St. Louis, like many of the tracks on tour, is a place where we've had great success in the past," Coughlin said. "That always pumps you up because those memories are all positive. It's performance time, plain and simple, and we plan to just continue what we did in Reading and just win more rounds on Sunday.

"I'm also excited to be racing with brother Mike (Coughlin) again. He's got a massively updated ride and tells me it's really looking promising. Mike's put together a fun group to hang around so we'll have some laughs for sure. My wife Samantha also is racing for the first time in a while and I know she's excited to contest Super Comp once again in her JEGS.com dragster. It's going to be a big weekend."

"We have the same car but pretty much everything has changed besides the paint job the crew and the driver," said Mike, a two-time Division 3 champion. "We put a PSI screw blower on the car to make it more consistent whenever we encounter weather changes. We also changed the transmission, removed the rear suspension and back-halved it. I believe we now have the perfect car for Top Dragster competition.

"A lot of work has gone into this car since we last raced in Norwalk and I'm thankful to everyone at Dan Page Race Cars, Ryan Micke and the group at ComSYNC EFI, and my crew guys, Tony Collier, Greg Cody and Dave Raurk. I'm really excited to get back in the seat, especially after testing went so well. It's been too long."