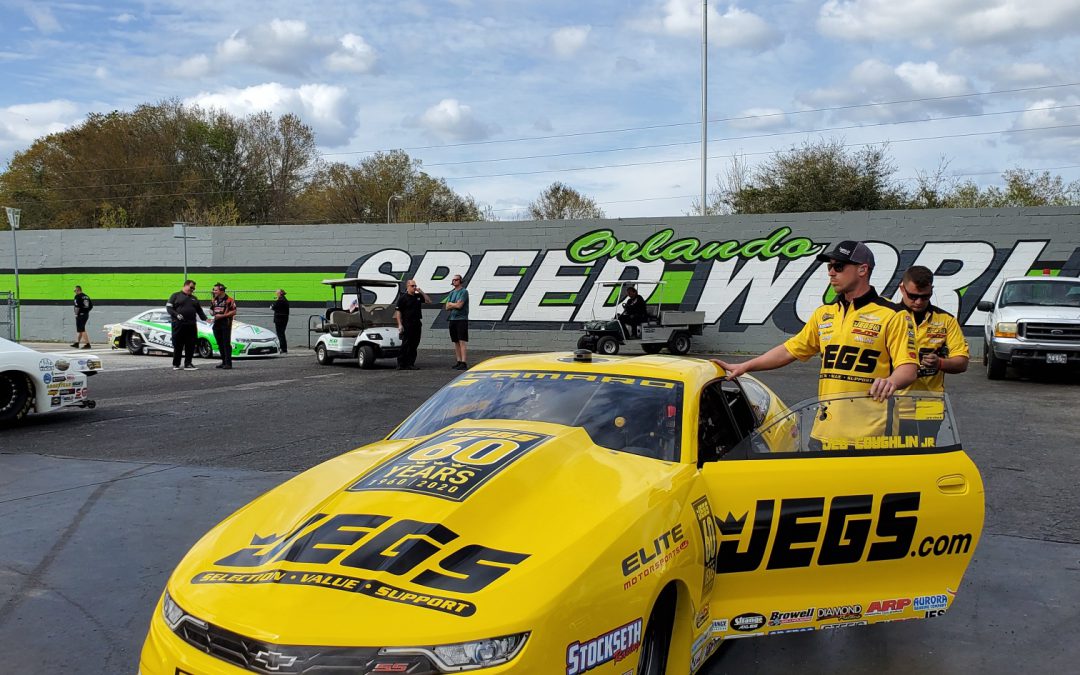 GAINESVILLE, Fla. (March 10) — With two wins in the first three races of the year, Jeg Coughlin Jr. arrives at this year's 51st annual Amalie Motor Oil NHRA Gatornationals on one of the most impressive streaks of his career. He's hoping his fast start continues at historic Gainesville Raceway, a track where he's reached the trophy round six times in the past.

The six-time world champion will be joined in the pits by Team JEGS teammates Troy Coughlin Jr. and Makenna Brown, who are both competing in Super Comp, Makenna in the JEGS dragster usually driven by Jeg Jr.'s wife Samantha.

"We're set for a big weekend," Jeg Jr. said. "The Gators are always a special race, the first time the NHRA tour gets to the East Coast each year, and we're coming in on a great run. It's been a stellar start to the season for our JEGS.com Elite Motorsports Chevrolet Camaro and the Elite team in general. The wins are already stacking up."

One month ago, Jeg Jr. dominated the season-opening NHRA Winternationals, posting the quickest elapsed time of every round of qualifying and eliminations enroute to his 64th Pro Stock victory. Two weeks later, he was top qualifier in Phoenix, a race won by his teammate Erica Enders.

"We've been clicking really well as a team," Jeg Jr. said. "The mindset has been very aggressive and it's working. We're doing everything we can as a group to win races. That same game plan is in place for this weekend. We want to be the last team standing come Sunday afternoon."

Fresh off back-to-back regional championships in Top Alcohol Dragster, Troy Jr. is returning to Lucas Oil Drag Racing Series action in his trusty JEGS.com Super Comp dragster. The nephew of Jeg Jr. is an eight-time national event winner, including a Super Gas victory at the 2013 Gatornationals.

"I'm excited to be racing with Uncle Jeg and my cousin Makenna," Troy Jr. said. "I love these older races because they have so much history. Plus, it'll be our second weekend in a row out of the cold so I'm super happy to be here."

This will be the first national event for Makenna, the granddaughter of JEGS founder Jeg Coughlin Sr. and his wife Sue. Up until now, Makenna has been learning the ropes in Junior Dragster, winning multiple races and track titles along the way.

"I am so excited to get after it this weekend at the Gatornationals," Makenna said. "I am so thankful to spend time with my family and work with my team to turn on some win lights. I'm really looking forward to spending my 20th birthday at Gainesville Raceway."