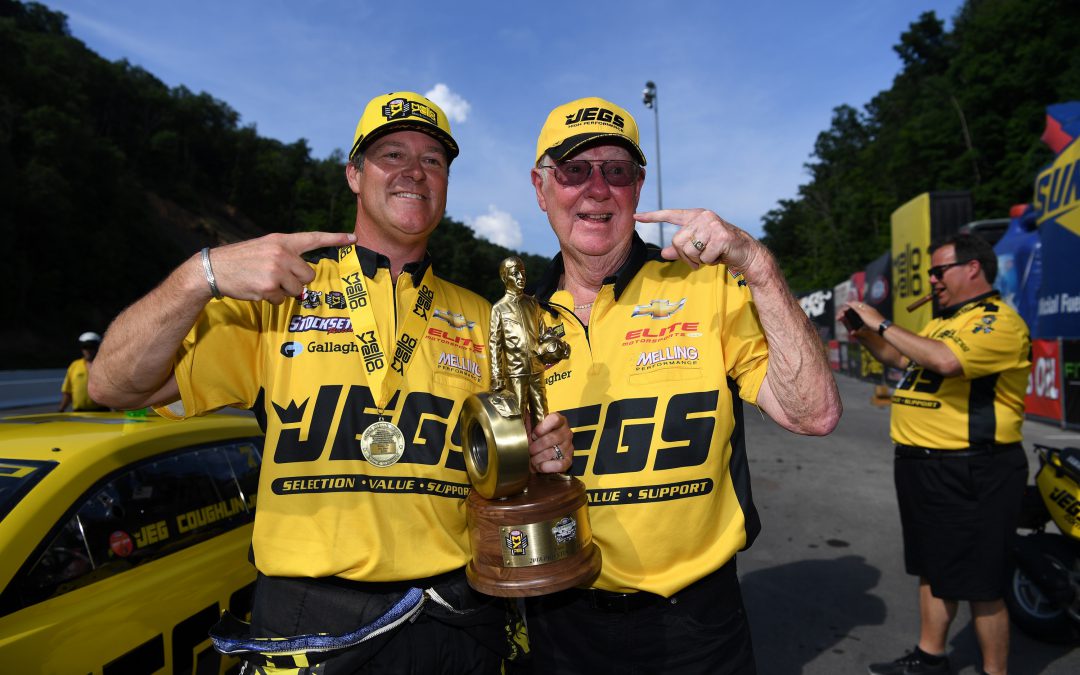 DELAWARE, Ohio (June 19) — Six-time world champion Jeg Coughlin Jr. soars into his home state on a three-race winning streak that has lifted his JEGS.com/Elite Performance team in the world rankings and breathed new life into the 79-time national event winner.

"When you’ve gone as long as we had without winning, you reach a point where you take whatever you can get," Coughlin said, referring to a career-long, four-year winless stretch he snapped three weeks ago. "The last couple years were a little tiring at times and although we had our chances here and there, we never capitalized on them.

"Suddenly, we find our way and the entire mood changes. For five or six races now we've had a great racecar and we know it. When you feel that confidence in every corner of your racecar you know you have an opportunity to make a real impact. It's put everyone at Elite on a party wagon, so to speak, but I'm just going to stay focused. However, I'm certainly enjoying this feeling because you can never take it for granted."

Picking the perfect stage to breakout, Coughlin won the Pro Stock trophy at the 21st annual JEGS Route 66 NHRA Nationals three weeks ago in Chicago. A week later in Virginia, he triumphed in Super Comp, before returning to the top of Pro Stock Sunday in Bristol.

"Chicago was a perfect weekend," Coughlin said. "We qualified great and had the quickest car every round on race day. We were slightly disappointed in the Pro Stock car in Virginia because we had the quickest car of Round 1 but shook the tires in Round 2 and lost. Fortunately, we went on to win Super Comp, which is every bit as hard as Pro Stock, so that kept us on this high. Then we returned to form in Bristol. It's been a wonderful run and we don't want it to stop."

Coughlin already has his eyes on Norwalk and has been closely monitoring the forecast. Norwalk is one of two tracks on tour where Coughlin has yet to win.

"We're seeing temperatures in the 70s and 80s, which will be a refreshing change after some really hot weekends," he said. "It'll be great to race in front of a home state crowd that will certainly be giving us some extra energy, and we have a full complement of family racing with us, which we love. On top of it all, my good luck charm from the last few races, Jeg Sr., will be with us so we're excited."

Joining Jeg Jr. in Norwalk will be his wife Samantha, who will race in Super Comp along with their niece Paige, brother Troy Coughlin in Pro Mod, Troy's son Troy Jr. in Top Alcohol Dragster, brother Mike in Super Gas, and in-laws Alan and Jason Kenny.